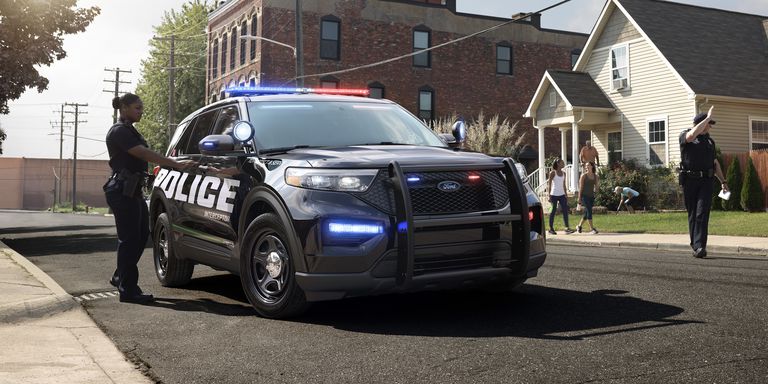 Ford has been making police cars for years, and it’s just announced its newest one: the 2020 Police Interceptor Utility. This time around, it comes with standard hybrid power and all-wheel drive. It’s aimed at keeping officers up to date with the newest tech, while also keeping them safe and saving taxpayers money. Plus, it looks cool as hell.

The biggest news is the addition of an all-new hybrid powertrain. It uses a 3.3-liter V6 paired with a lithium-ion battery and a 10-speed automatic transmission, able to produce a total of 318 horsepower (14 horsepower more than the 3.7-liter V6 model it replaces). Designed to combat all the time police spend idling, it can shut off the engine for long periods of time so the car doesn’t have to burn gas powering things like lighting, radios, and computers. It gets an EPA-estimated rating of 24 mpg combined, which, according to Ford, is a 41 percent improvement over the last-gen 3.7-liter.

It’s also quicker. Michigan State Police tested the hybrid Interceptor in 0-100 mph acceleration, fastest lap, fastest average lap, and highest top speed (137 mph, if you were curious). It clocked a 0-60 mph time of 6.9 seconds, and a top speed of 137 mph. It was able to beat all of its competitive models, save for its more powerful sibling, the 3.0-liter twin-turbo Ecoboost Interceptor. That car now puts out 400-horsepower and 416 lb.-ft. of torque. Like the hybrid model, power is sent to all four wheels via a 10-speed automatic.

In addition to those two powertrains, there is a third, budget option. Buyers can opt for the 3.3-liter V6 without hybrid assistance, in case departments want to save money. Like the other two powertrains, it gets all-wheel drive and a 10-speed automatic gearbox. Ford has yet to release acceleration times for both this variant and the twin-turbo Ecoboost model. All Police Interceptors get things like heavy-duty wheels, suspension, and brakes built to withstand all of the extra stress from police-related driving. There’s also extra cooling to counter the rigors of high-load engine situations. As far as real-world toughness goes, Ford’s done the testing: The Interceptor can withstand an eight-inch curb impact, a railroad crossing at 30 mph, as well as water fording as high as 18 inches.

The Police Interceptor is one of America’s best-selling law enforcement cars, and judging by this latest version, we bet it’ll only get more popular from here. We can’t wait to see it on the road.