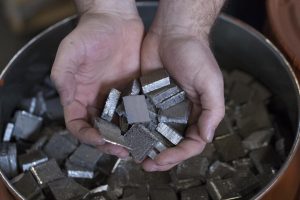 Lithium stocks paused Tuesday, but after running up for several days amid continued pricing strength for the indispensable EV battery metal. President Biden signed big tax-and-climate legislation that includes a long-term expansion of EV tax credits, but with significant restrictions. Top performer SQM stock reports earnings on Wednesday afternoon, providing another potential catalyst. The only question is whether lithium stocks are coming too far, too fast.

Investors also will get an update on SQM’s lithium production ramp, which has been much faster than peers like Albemarle and Livent.

SQM isn’t just a lithium play. It’s also the largest producer of potassium nitrate, used for fertilizer, and a leading producer of iodine. But SQM’s lithium revenue exploded by 970% from a year ago to $1.446 billion in Q1, accounting for 72% of the total and that share keeps rising.

Lithium stocks jetted higher over the past week. SQM was featured as IBD Stock Of The Day just a week ago when it was just below an early entry point. SQM stock kept surging through Monday.

SQM stock is still not far from a 115.86 buy point from a cup base, 10 cents above its May 27 record high. Even with Tuesday’s pause, SQM is 14% above its 50-day moving average. A near-term breakout to a new high could leave the stock looking extended and possibly prone to a pullback. Ideally, SQM stock would form a true handle before breaking out.

Albemarle was featured as IBD Stock Of The Day last Wednesday as it cleared a 250.25 handle entry point. ALB stock, part of the IBD Leaderboard portfolio of elite stocks, surged 18.3% last week. On Monday, ALB stock fell 1.15% to 280.81.

Lithium Americas Corp., which is awaiting a final court ruling this fall before it can start work on its Thacker Pass, Nev., mine, is up nearly 19% this month, despite Tuesday’s 2% loss.

The newly approved Inflation Reduction Act allows for a $7,500 tax credit to purchase a new EV. Unlike the law it replaces, which phased out the credit for purchase of electric vehicles made by Tesla and General Motors, there is no ceiling on how many vehicles can be purchased per manufacturer.

However, there are new requirements for automakers to qualify for the tax credits. Final assembly has to occur in the U.S. In addition, the law requires that the bulk of key EV materials such as lithium be produced domestically or in a country that has a free-trade agreement with the U.S.

Chile and Australia, both key lithium producers, are free-trade partners with the U.S. Argentina, an up-and-coming lithium supplier, is not. Nor, of course, is China.