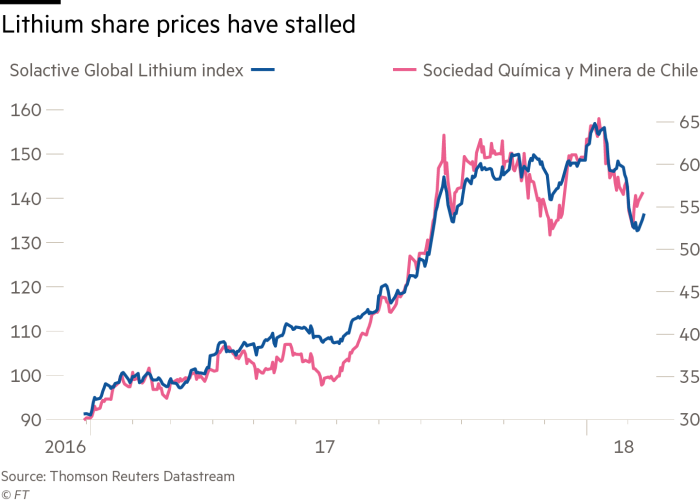 Controlled by Julio Ponce, the well-connected son-in-law of Chile’s former dictator, Augusto Pinochet, SQM was known as a fertiliser company. However, the then obscure lithium business is why the 32 per cent stake is now valued at $4.7bn.

Lithium has hitched a stunning ride on the wave of interest in electric cars, making it one of the world’s hottest commodities. SQM’s lithium business generates about 60 per cent of the profits for the company, which is in talks with Elon Musk’s Tesla over a deal to supply lithium, a key ingredient in electric car batteries.

It is against this backdrop that Potash is being forced by regulators to sell the stake as a condition of its merger with rival Canadian fertiliser producer Agrium. While only a handful of companies are likely to compete for the stake, the eventual price will be an important measure of how seriously the hype around electric cars is being taken.

“It’s a good barometer of where lithium is today,” Simon Moores, founder of London-based consultancy Benchmark Mineral Intelligence, says. “Anyone investing $5bn has to invest for the long term, on a 10- to 20-year horizon, and so there’s no doubt you have to be extremely bullish on lithium.”

The appeal of owning the stake is clear. It offers the buyer significant exposure to one of the lowest-cost producers of lithium in a country with the largest reserves of the metal in the world. Sociedad Química y Minera de Chile (SQM) accounts for more than 20 per cent of the world’s lithium supply, making it one of five companies that dominate the global market alongside China’s Ganfeng, Tianqi Lithium, FMC and Albemarle.

What is more, last month SQM and the Chilean regulator reached a deal that allowed it to more than quadruple its output by 2025, breaking with a previous practice in which SQM had to pour lithium-rich brine back into the desert to avoid exceeding its quota.

Those with a potential interest include Anglo-Australian miner Rio Tinto, according to people familiar with the matter. China’s Tianqi Lithium, which snapped up a 2 per cent stake in SQM for $38 a share in 2016, has also shown interest, they said. Chilean pension funds could also buy some of the shares, according to analysts.

However, analysts say the challenge for a buyer is twofold. Parting with several billion dollars requires taking as clear as possible a view on the future of electric cars, where hyperbole is common and forecasts vary wildly between optimism and caution.

The price for lithium carbonate from South America has more than doubled over the past two years to hit $14,500 a tonne, according to Benchmark Mineral Intelligence. If electric vehicles reach 5 per cent of car and light truck sales globally by 2025 from their current level of 2 per cent, then lithium prices will fall to $6,900 a tonne by 2025, according to consultancy Wood Mackenzie.

However, if that share, including plug-in hybrids, climbs to 12 per cent by 2025 lithium prices will remain at current levels and then move towards a long-term price of $13,600 a tonne, the consultancy forecasts.

Unlike commodities such as oil or copper, lithium is not traded on any exchange. Instead, pricing is set through long-term contracts with buyers or on the spot market in China, the world’s largest electric car market.

Wherever bidders end up sitting on the spectrum of forecasts, they will also be competing against a backdrop in which rising lithium prices have unleashed a surge in supply. Companies are hunting for the metal around the globe, including in Cornwall, Nevada, Mali and Australia, where there has been a rapid build-up of production. As a result, some analysts who follow the industry forecast a surplus for the next few years.

“Why would you buy a $5bn stake in a resource that is geologically abundant?” says one investor.

Shares in SQM, whose investors include Iridian Asset Management and New York-based Renaissance Technologies, according to filings, rose more than fourfold in the past two years, but have fallen 12 per cent since the middle of January to $56 a share.

Ben Isaacson, an analyst at Scotiabank in Toronto, says SQM’s share price reflects lithium prices well above the marginal costs of production “which isn’t realistic”. The lithium price will fall to a long-term average of between $8,000 and $10,000 a tonne, he forecasts.

In December Mr Ponce signed a deal with Chile’s regulator Corfo to give up his control of SQM, which was exercised via a joint voting pact with Japan’s Kowa Group. He still maintains a 30 per cent stake in SQM through holding companies known as the cascadas, or “waterfalls”, for their complicated structure.

That opens the tantalising prospect for any buyer of the possibility of full control of SQM if Mr Ponce is willing to sell his shares.

“For someone investing in that stake they need to do it for a good return on investment or potentially as a stepping stone to take over the whole company,” says Howard Klein, a New York-based partner at RK Equity, which advises companies in the sector.

“Lithium is experiencing a far bigger demand shock,” he adds.

The sale of the SQM stake will reveal just how valuable the world thinks that shock is.