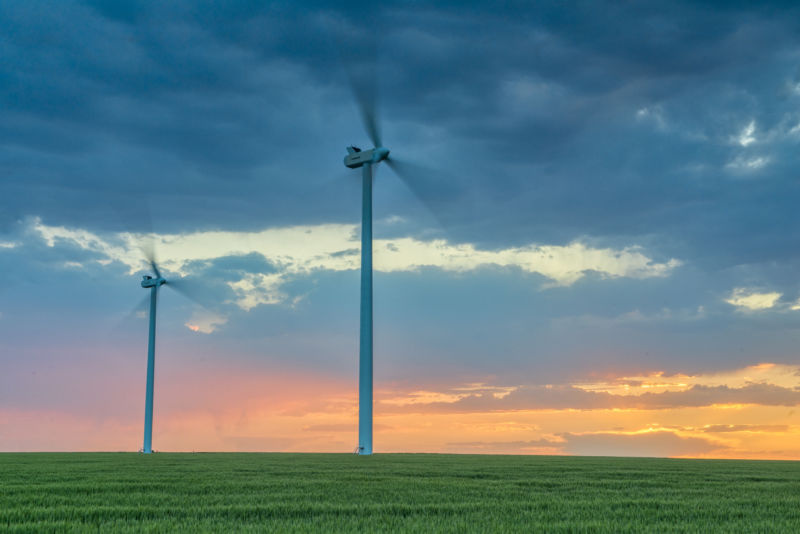 Proposals for renewable electricity generation in Colorado are coming in cheap, like, $21/MWh-cheap for wind and battery storage. Though there are a few caveats to those numbers, federal incentives and quickly falling costs are combining to make once-quirky renewable projects into major contenders in an industry where fossil fuels have comfortably dominated since the 19thcentury.

Early last year, Colorado energy provider Xcel Energy requested proposals for new electricity generation. Specifically, the company needed 450 megawatts of additional generation to meet future demand. In a separate request called the Colorado Energy Plan, Xcel said (PDF) it would consider replacing two coal plants providing 660MW of capacity with “hundreds of megawatts of new wind and solar as well as some natural gas-fired resources” if new resources could be found cheaper than what those coal plants cost to operate (including costs to shut down the plants early).

By late November, energy companies had submitted their best offers. Although exact details of the offers aren’t available yet, Xcel Colorado was required to make public a summary of the proposals (PDF) in the month after the bids were submitted.

It seems that competition is fierce. In Xcel’s report it noted that it received 430 bids for 238 potential projects (some developers submitted multiple bids for the same project with different completion dates, ownership structures, and so forth). More than 350 of the bids were for renewable projects. In 2013, Xcel notes, a similar request for proposals yielded just 55 bids.

Surely some of this activity is due to deadlines—renewable energy developers are eager to get projects on the books and break ground before the federal Investment Tax Credit starts to phase out. Currently, wind and solar projects can build their installations with a 30-percent tax credit (that is, a dollar-for-dollar reduction in the income taxes, according to the Solar Energy Industry Association).

Even if contracts are executed quickly enough to take advantage of federal tax credits, the cheapest renewable bids reported by Xcel today are not guaranteed to win a spot on Colorado’s grid. That’s because the bids don’t include costs of interconnection, network upgrades, or “credits for items like quick-start capability,” Xcel says, and all of that will have to be taken into account when the utility does its computer modeling to test out options on its grid.

Still, the prices quoted were encouragingly competitive. Although Xcel’s report doesn’t have a lot of details, this is what we know:

A few more traditional, dispatchable technologies were proposed as well, but Xcel asked bidders to price these out in terms of dollars per kilowatt-month ($/kW-mo). That unit of measurement is considered capacity pricing, or pricing for electricity that’s generated when demand exceeds a certain point, so it’s not quite comparable to the $/MWh seen above.

Interestingly, 28 bids for stand-alone battery storage were placed, with the median bid at $11.30/kW-mo. Standalone battery storage was the only category in which Xcel offered some context for how much storage would be available. The 28 bids represented 12 projects that ranged in size from 100MWh (25MW with a four-hour duration) to 1,500MWh (150MW for a 10-hour duration), with a median capacity of 450MWh. Considering there’s no grid-tied chemical battery in the world that’s as big as the median bid reported by Xcel, the storage bids seem almost overly ambitious. The only planned project in the US that could come close, to our knowledge, is a 100MW/400MWh system being built by Fluence (a joint company owned by Seimens and AES) in Southern California. Fluence has said that when that battery installation is built, it will be the biggest in the world.

Xcel didn’t include pricing for generation systems in which two or fewer bids were placed, presumably to protect company secrets before a final decision on winning bids. Two bids were made to build gas-fired combined cycle turbines and one bid was placed to build a compressed air energy storage (or CAES) system, which is interesting because there are hardly any grid-connected CAES installations around the world (in recent Ars research we found just three commercially operating CAES systems).

One bid also offered a plan for an “internal combustion engine with solar” system. That system would consist of “a small photovoltaic field and a small ‘off the shelf’ internal combustion engine burning wellhead and/or pipeline natural gas” where solar would provide 60 percent of the annual energy, and the gas-fired portion would provide 40 percent of the annual energy, Xcel said. The two resources would not be connected, and neither would be dispatchable, so it’s sort of an odd project.

The numbers above give an exciting taste of what could be in store for Colorado, but Xcel’s report is best approached with tempered optimism. The utility now has months to craft a plan using information from these bids, and the Colorado Public Utility Commission (CPUC) will make a decision on Xcel’s proposed ideas around late July, according to the Denver Post.

A lot could change in the next few months. For one, the Trump administration is currently assessing potential tariffs on imported solar panels after the International Trade Commission ruled this fall that domestic solar panel manufacturers were unfairly hurt by cheap imports from China and Chinese-owned factories in other Asian countries. A tariff will almost certainly make some of the bids including solar more expensive, and the Post notes that bidders will have an opportunity to revise their bids with any updated information if something like this should happen.

In addition, any delays in permitting or breaking ground could cause some of these projects to become much more expensive if they’re not in service by 2023, when the higher rates of the federal Investment Tax Credit expire.

But there is one near-term deadline that these rates will impact: the CPUC is set to vote in March on whether to accept the Colorado Energy Plan that would shutter those two coal plants if cheaper, cleaner energy could be found. This recent bid report suggests that the case can be made to move forward with that plan.