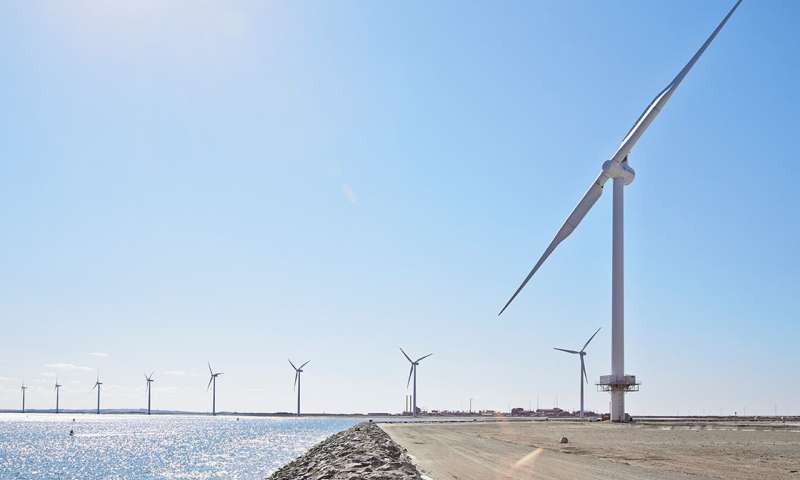 The EcoSwing consortium announced it has taken a special generator to a site in Denmark. This was momentous. A previously installed permanent magnet generator was now swapping places with a new superconducting device. The people making this all work have contributed their own sets of expertise in Germany, The Netherlands and France.

Wind turbine news came in the form of a news release from the EcoSwing site. “Permanent Magnet Out – Superconductor In.” Now that the EcoSwing generator is ready for turbine integration, supporters say this is a sign of new directions.

A video showing the EcoSwing project in action with Envision was posted in October. Envision is one of the partners in the consortium making this possible.

Fundamentally, the news is that EcoSwing’s actors have fulfilled an objective to install a superconducting drive train on an existing wind turbine in Denmark, on the Danish west coast. This is a large-scale wind turbine.

“Superconducting drive train” may be a mouthful but the three words highlight what is special about this effort in wind power. “Superconductivity” is now in focus. For the first time ever, a superconducting generator is about to be installed, said the video narrator, in a functioning wind turbine. The equipment was described as a multi-megawatt direct-drive superconducting wind generator.

Superconductors are described as “highly complementary” to energy-efficient technologies, as a substitute to copper. The video described the generator as “a complex piece of engineering.”

Nextbigfuture had the details: “The new generator is 4 meters in diameter, 1.5 meters smaller than a conventional one. It sits inside an 88 meter tall 3.6MW turbine in Thyboron, Denmark.”

The video talked about the business case for all this. And the narrator said the business case was quite clear. Superconductors, after all, can carry large amounts of current in a very compact, dense manner, said Dr. Jurgen Kellers, who is managing partner at ECO 5. And that, he said, was a very interesting proposition if you want to build a lightweight, compact, low-cost generator.

Electrical machinery that is lightweight and compact carries advantages. “Vastly reduced material usage contributes to making this technology highly competitive to conventional machinery,” said the project site. The generator is getting ready for its first taste of the rough North Sea wind.

In a photo caption in Chemistry World sourced back to EcoSwing, it said that the 3.6MW wind turbine in Denmark had its permanent magnets replaced by “a high temperature superconducting ceramic.”

“The switch means that it’s possible to build lighter, smaller wind turbines that are less dependent on expensive rare earth elements. This means that the price tag of turbines could fall and, in turn, cut energy costs.”

EcoSwing has funding from a research and innovation program of the European Union. This is a consortium with the purpose of delivering a “value chain” from superconductor to end user. As such, the groups that belong to EcoSwing are from academia and industry.

Engineers at ECO 5 delivered the core design. The Fraunhofer Institute for Wind Energy and Energy System Technology (IWES), was set to run a ground-based test ahead of the actual installation. The partner lineup also included Sumitomo Cryogenics of Europe, which supplied cryogenic equipment. Cryo-coolers chill the superconductor to –240°C, said Nextbigfuture.

In the bigger picture, project participants treat this effort even as a kind of disruption, in the positive sense, in the energy industry. According to Jesper Hansen, senior project manager, Envision Energy, superconducting generators will move the boundaries of how drives are designed. The project is claimed to be “the world’s first” such drivetrain, showing “a piece of engineering history.”