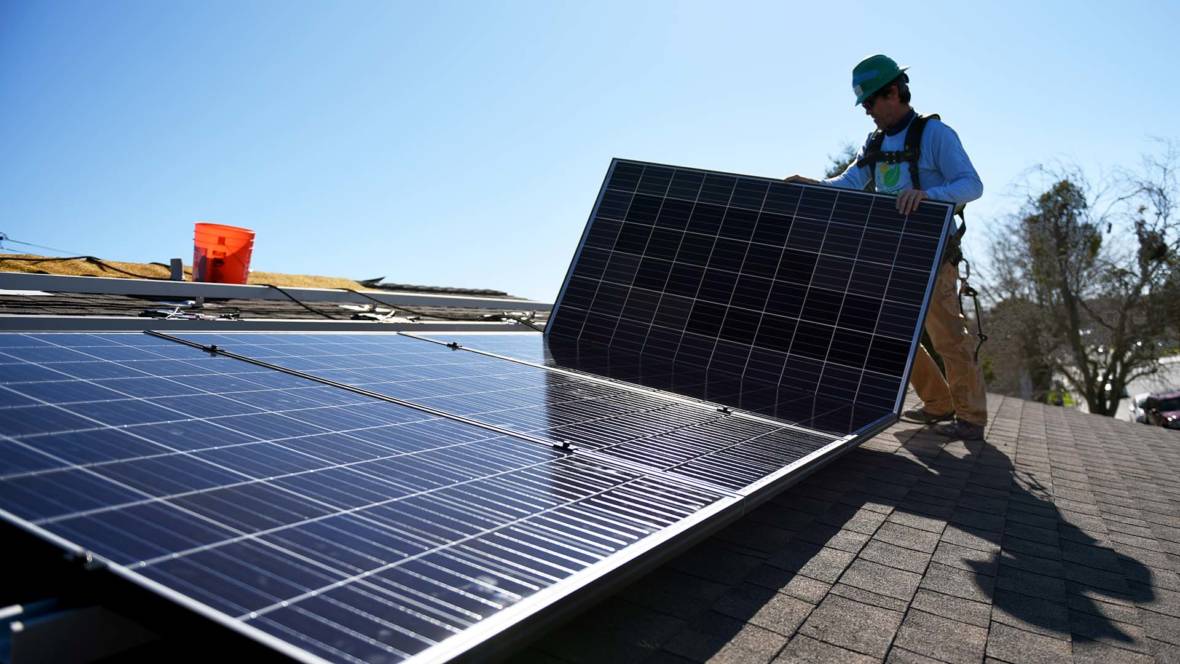 California has some hurdles to overcome in meeting the most ambitious clean energy goal in the country.

Governor Jerry Brown signed SB 100 today, requiring that 100 percent of the state’s electricity must come from solar, wind and other emissions-free sources by 2045.

For the fifth largest economy in the world, that would mean a wholesale transformation.

But will it bring about the end of fossils fuels in California?

If the past is any precedent, it’s going to be difficult. So far, California hasn’t gotten as much benefit from its capacity for solar as it could. That’s because California has to keep natural gas running to supply energy on cloudy days and at night.

That’s created an uncomfortable marriage between renewable energy and fossil fuels. And it’s one that California policymakers will have to figure out how to dissolve, if the state wants to reach its clean energy targets.

The next steps in clean energy will be a bit tougher than what the state has done so far, says Laura Wisland, who works on energy policy for the Union of Concerned Scientists.

“The easy part is bringing renewables onto the grid,” she says. “How do we actually turn down the fossil at the same time?”

It wasn’t long ago that solar energy was considered an expensive, niche technology. Then, in 2002, California lawmakers passed the first renewable mandate, requiring utilities to put 20 percent renewable energy onto the grid. Opponents cautioned that the technology would be too expensive and unreliable.

“A lot of those fears were really unfounded,” says Wisland. “The cost of renewable energy has come down quite significantly.” Today, solar and wind are competitive with natural gas power.

In the years that followed, California lawmakers got even more ambitious, requiring 33 percent renewables by 2020 and 50 percent by 2030.

“One of the most important things we’ve done over the years is the legislature has set goals that are within reach but seem like stretch goals at the time,” Wisland says.

Today, about a third of California’s electricity comes from renewables, including solar, wind, geothermal, biomass and small hydropower dams.

Solar installations, in particular, skyrocketed. In just five years, solar went from less than 1 percent of California’s in-state electricity generation in 2012 to over 11 percent in 2017.

But electricity from natural gas has also held steady. In 2017, it represented more than 40 percent of California’s in-state generation.

And that’s because solar energy has fundamentally shifted the way the state’s electric grid is run.

That’s because solar energy has fundamentally shifted the way the state’s electric grid is run. When the majority of Californians turn on their lights, it’s due in large part to about a dozen people staring at a wall of screens in Folsom, California. It’s the California Independent System Operator, which runs most of the state’s grid.

When I visited two years ago, it was a sunny day, which meant the state’s solar farms were cranking out electricity. But solar presents a few tricky problems for grid operators.

“Within an hour, you could have a cloud come over a solar field and then a few minutes later move away and then come back over,” Traweek said. That would cause the power supply to drop suddenly. “That needs to come from somewhere else immediately.”

Solar electricity also drops off as the sun sets, but that is the time when the state needs electricity the most, because Californians are coming home from work and turning their lights on.

So grid operators have to keep natural gas plants running in the background. If they’re turned off, they can take as long as eight hours to start up if the power plant hasn’t been run recently

But running solar and natural gas together during the day can create more electricity than is needed, especially in the spring and fall, when Californians aren’t running their air air conditioners. And flooding the grid with too much power can cause it to fail.

“Now we really [have] to start cutting as much as we possibly can,” said Traweek. “If that’s not done, then you could have a blackout.”

So, grid operators have to tell solar farms to shut off. And it’s happening more and more often. So far this year, California has forgone enough solar electricity to power San Francisco for 20 days.

“Part of that problem is that we’re not making enough room for solar on the grid,” says Wisland. “There’s a lot of different ways to deal with that issue.”

The extra solar energy could be stored in large batteries or other energy storage technologies, or it could be shared with neighboring states. That would preclude the necessity of turning it off.

“We can do more to shift our electricity demand to the middle of the day, so that we’re taking advantage of that solar resource,” Wisland says. “We can also do more to make investments in different types of renewable generation technologies that actually do generate during the nighttime. Examples of that are geothermal or wind, especially wind in other places in the West.”

The state has mandated that California utilities install energy storage. Many of those solutions, however, are still being developed.

Maybe that’s why the natural gas industry isn’t quite as worried as you’d think.

“The bulk of the modern gas fleet is going to stick around and be needed for a while,” says Matt Barmack of Calpine, which owns 20 natural gas power plants in California.

Today, the big batteries on the grid only store several hours worth of electricity. That is not enough to fill big energy gaps created by the weather.

But the rise in solar power has upended the economic model for many natural gas plants in California.

“It used to be that we would generate the most in the afternoon,” Barmack says. Now, that’s when solar is available at a very low price, and the electricity from natural gas power can’t compete.

Barmack says there’s a real risk that many natural gas power plants will go out of business while California still needs them.

“I think in some cases that’s OK, because that’s a market signal that the generation from those plants isn’t necessary anymore,” says Wisland.

But there needs to be a careful exit strategy for natural gas power, he says. Some natural gas plants are located in places where they’re important to ensure reliable power for a local area.

“It’s clear that there is going to be a role for some natural gas on the system,” Wisland says. “And in those cases, we will need to have a conversation about whether it’s necessary to rethink the way certain natural gas plants get paid, at least in the short term, so that they don’t retire before we’re ready to replace them with a cleaner resource.”

That could be through an existing special energy market in California, known as “resource adequacy.” Power plants get payments that way simply for being available to ensure the grid can function reliably.

While California’s 2045 goal could mean the end of fossil fuel plants as they operate today, there could be a way for them to survive. The state’s electricity doesn’t only have to come from renewable energy, but “clean” sources that don’t produce emissions.

So, Calpine says it’s looking at capturing the carbon emissions from its power plants and trapping them, a technology known as carbon capture and storage. But the technology is still in its early days.

“It’s safe to say that it’s at the pilot phase,” says Barmack. “It’s definitely something we’re interested in.”

The question remains about how fast technology like energy storage will develop to augment renewable energy.

“You can do a lot with wind, solar and storage technology, but it’s very difficult to squeeze the last bit of gas generation out of the system,” says Barmack. “How far do we really want to go,” he says, alluding to the state’s new 100 percent goal. “Is 95 percent enough, given that 95 percent is likely to be a lot less expensive than 100 percent?”

But “2045 is a really long time away, and we’ve got a lot of tools on the table already to get there,” says Wisland. “California never ceases to surpass and exceed people’s expectations in terms of what we can come up with when we set our minds to it.”

So far, at least, the state has met every one of its renewable energy goals.