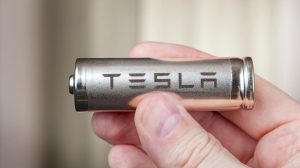 Electric vehicles are new, fun, and evolving at a rapid pace. And while we’re seeing major improvements to charging speeds and mileage, there’s still a long way to go. One of the more exciting advancements is solid-state batteries, and you’ll be hearing a lot about them in the near future.

See, EVs of today get power from lithium-ion batteries, the same type of battery inside our smartphones, laptops, and tablets. There’s nothing wrong with that, but solid-state cells promise a better future.

With that in mind, here we’ll explain a bit about solid-state EV batteries and how they differ from the current lithium-ion cells in a Tesla or F-150 Lightning?

Solid-State vs. Lithium-Ion: What’s The Difference?

Lithium-ion batteries use a liquid electrolyte that allows the flow of energy between the cathode and anode side during charging and when a battery is in use. This liquid (or sometimes a gel) also stabilizes the surfaces, extends lifespan, and is an improvement over older battery technology.

The ions inside a battery switch from one side to the other during use and go back while charging, eventually wearing down over time. The electrolyte solution helps improve the process, slows degradation, and improves the lifespan.

However, current Lithium-ion batteries are flammable, have a limited voltage range, and start to lose performance over time. Similar to how your phone doesn’t hold a charge as well as it did when you first bought it. They’re also heavy and not very energy-dense.

By removing the flammable liquid electrolyte, solid-state batteries have fewer moving parts and are more stable, compact, lightweight, and safe. They’re also expensive and hard to manufacture, which is why we’re not seeing them in vehicles already.

Solid-state batteries aren’t new and typically only used in small electric devices, like pacemakers and medical equipment, and most aren’t rechargeable. Could that be about to change?