Fines are the fine particles of manganese ore created when crushing manganese rocks. The fines are heated to sinter them (make them stick together, or become “agglomerated”).

“The mines produce a lot of fines,” Hockaday explained. “But they can’t sell them, as furnaces won’t buy materials that are too fine.”

So the mines separate out the fines, and agglomerate them together into bigger pellets between 6 mm and 75 mm, by wetting them to make them sticky, and rolling them into lumps called green sinter, mixing in about 10% of coke particles.

Then these green sinter “mud balls” are heated in a sintering machine on conveyor belts to about 600°C with diesel burners which makes the coke burn, causing the temperature to rise to 1200°C, at which point the outer surfaces of the mud balls partially melt, making them stronger and more cohesive. 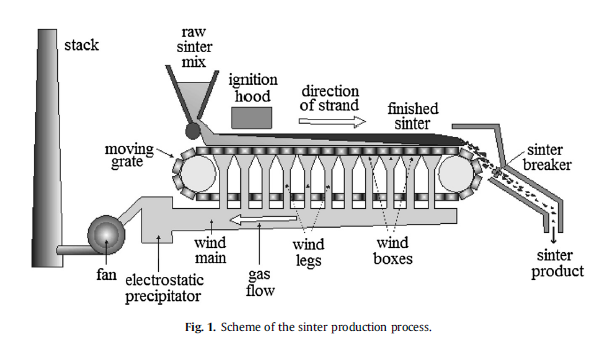 As well as replacing diesel to heat the green sinter, Hockaday believes she can also eliminate the coke combustion, for a carbon reduction of up to 100%, although the traditional industry has been skeptical.

“Some have raised the question that we need a reducing atmosphere because that’s the way it’s always been done,” she related. “But thermodynamically we should be able to get away with not adding coke fines, just sintering with solar energy. There’s no reaction that we can see that this requires carbon. So I hope to actually show that we can do this without any coke.”

Once the fines are sintered, they then go to a blast furnace or an electric arc furnace, to smelt the manganese iron into manganese alloys.

It is here that fines would be a big risk for literally gumming up the works or even causing explosions. In the blast furnace, hot gases are produced by the reduction reactions.

“These furnaces work with layers of chunky material, and you need spaces for the gases from the reactions to rise up through this material and escape at the top of the furnace. If you have fine particles, almost powder, you can imagine how this fills the pores, preventing the gases from escaping,” she explained.