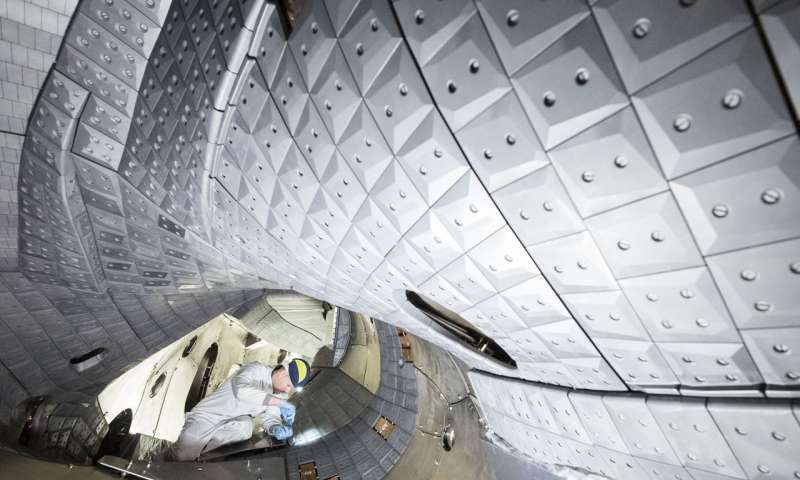 In the past experimentation round Wendelstein 7-X achieved higher temperatures and densities of the plasma, longer pulses and the stellarator world record for the fusion product. Moreover, first confirmation for the optimisation concept on which Wendelstein 7-X is based, was obtained. Wendelstein 7-X at Max Planck Institute for Plasma Physics (IPP) in Greifswald, the world’s largest fusion device of the stellarator type, is investigating the suitability of this concept for application in power plants.

Unlike in the first experimentation phase 2015/16 the plasma vessel of Wendelstein 7-X has been fitted with interior cladding since September last year. The vessel walls are now covered with graphite tiles, thus allowing higher temperatures and longer plasma discharges. With the so-called divertor it is also possible to control the purity and density of the plasma: The divertor tiles follow the twisted contour of the plasma edge in the form of ten broad strips along the wall of the plasma vessel. In this way, they protect particularly the wall areas onto which the particles escaping from the edge of the plasma ring are made to impinge. Along with impurities, the impinging particles are here neutralised and pumped off.

“First experience with the new wall elements are highly positive”, states Professor Dr. Thomas Sunn Pedersen. While by the end of the first campaign pulse lengths of six seconds were being attained, plasmas lasting up to 26 seconds are now being produced. A heating energy of up to 75 megajoules could be fed into the plasma, this being 18 times as much as in the first operation phase without divertor. The heating power could also be increased, this being a prerequisite to high plasma density.

In this way a record value for the fusion product was attained. This product of the ion temperature, plasma density and energy confinement time specifies how close one is getting to the reactor values needed to ignite a plasma. At an ion temperature of about 40 million degrees and a density of 0.8 x 1020 particles per cubic metre Wendelstein 7-X has attained a fusion product affording a good 6 x 1026 degrees x second per cubic metre, the world’s stellarator record. “This is an excellent value for a device of this size, achieved, moreover, under realistic conditions, i.e. at a high temperature of the plasma ions”, says Professor Sunn Pedersen. The energy confinement time attained, this being a measure of the quality of the thermal insulation of the magnetically confined plasma, indicates with an imposing 200 milliseconds that the numerical optimisation on which Wendelstein 7-X is based might work: “This makes us optimistic for our further work.”

The fact that optimisation is taking effect not only in respect of the thermal insulation is testified to by the now completed evaluation of experimental data from the first experimentation phase from December 2015 to March 2016, which has just been reported in Nature Physics. This shows that also the bootstrap current behaves as expected. This electric current is induced by pressure differences in the plasma and could distort the tailored magnetic field. Particles from the plasma edge would then no longer impinge on the right area of the divertor. The bootstrap current in stellarators should therefore be kept as low as possible. Analysis has now confirmed that this has actually been accomplished in the optimised field geometry. “Thus, already during the first experimentation phase important aspects of the optimisation could be verified”, states first author Dr. Andreas Dinklage. “More exact and systematic evaluation will ensue in further experiments at much higher heating power and higher plasma pressure.” 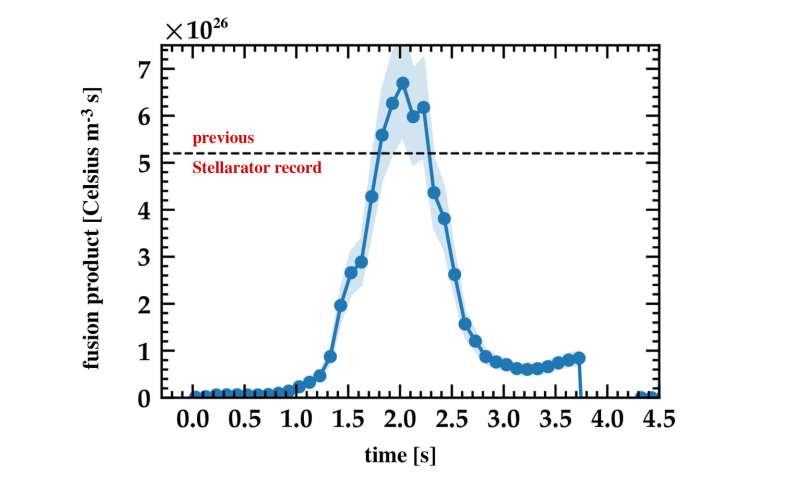 Since the end of 2017 Wendelstein 7-X has undergone further extensions: These include new measuring equipment and heating systems. Plasma experiments are to be resumed in July. Major extension is planned as of autumn 2018: The present graphite tiles of the divertor are to be replaced by carbon-reinforced carbon components that are additionally water-cooled. They are to make discharges lasting up to 30 minutes possible, during which it can be checked whether Wendelstein 7-X permanently meets its optimisation objectives as well.

The objective of fusion research is to develop a power plant favourable to the climate and environment. Like the sun, it is to derive energy from fusion of atomic nuclei. Because the fusion fire needs temperatures exceeding 100 million degrees to ignite, the fuel, viz. a low-density hydrogen plasma, ought not to come into contact with cold vessel walls. Confined by magnetic fields, it is suspended inside a vacuum chamber with almost no contact.

The magnetic cage of Wendelstein 7-X is produced by a ring of 50 superconducting magnet coils about 3.5 metres high. Their special shapes are the result of elaborate optimisation calculations. Although Wendelstein 7-X will not produce energy, it hopes to prove that stellarators are suitable for application in power plants.

Its aim is to achieve for the first time in a stellarator the quality of confinement afforded by competing devices of the tokamak type. In particular, the device is to demonstrate the essential advantage of stellarators, viz. their capability to operate in continuous mode.