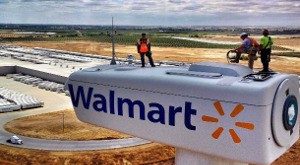 The deal with Bentonville, Arkansas-based Walmart includes three wind farms—all developed, owned and operated by EDP Renewables—in the states of Illinois and Indiana. The PPA details are as follows:

“Walmart has a goal to be supplied by 100 percent renewable energy and sourcing energy from wind farms developed by partners like EDP Renewables is a core component in the mix,” said Mark Vanderhelm, vice president of energy for Walmart.  “Wind energy is an important part of our energy portfolio, and Walmart plans to continue our efforts to pursue renewable energy projects that are right for our customers, our business, and the environment.”

“The declining cost of renewable power has led to an increase in clean energy procurement from companies like Walmart in recent years.  The continued commitment from corporate entities in procuring renewable energy speaks volumes about the importance and value of securing fixed, competitive pricing over the long-term,” said Miguel Prado, EDP Renewables North America CEO.  “EDP Renewables appreciates its partnership with Walmart and commends the company in its efforts to source all of its energy from renewable sources.”

EDP Renewables operates 797 MW of wind energy projects in Illinois and with the addition of the Bright Stalk Wind Farm and the Harvest Ridge Wind Farm, EDPR will further increase its footprint in Illinois, surpassing 1,200 MW of operational capacity by the end of next year.

EDPR also operates 801 MW of wind energy projects in Indiana.  With the completion of the construction of the 200 MW Meadow Lake VI Wind Farm, EDPR will exceed 1,000 MW— or 1 GW—of operational capacity by the end of 2018.

A recent report by the Wind-Solar Alliance indicated that large companies procured nearly four GW of utility-scale wind and solar in the U.S. through August of this year, breaking the previous high mark by 750 MW.