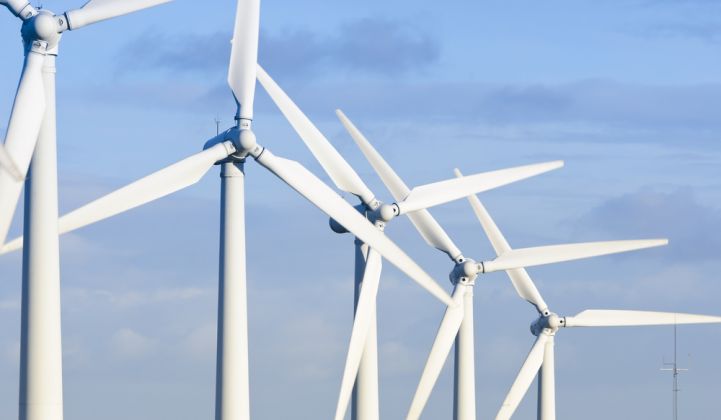 Wind farms turn out not to be the best neighbors — for downwind wind farms.

The researchers found that decreased electricity generation cost the downwind project owner an estimated $3.7 million in lost revenue from 2011-2015. Despite the potential for such significant losses for project owners, a search by the study authors found “no legal guidance for protecting existing wind farms from such significant impacts.”

The study, conducted by researchers at the University of Colorado, Boulder (CU Boulder), University of Denver, and National Renewable Energy Laboratory, combined atmospheric modeling with economic and legal analyses to document wake effects at two wind farms in West Texas.

Wind farms tend to cluster as project developers pursue sites with the best wind resources and access to transmission lines. According to the study, nearly 90 percent of U.S. wind farms are located within 25 miles of another wind farm.

“Theoretically, we thought this would be a thing,” said Daniel Kaffine, a study co-author and professor in CU Boulder’s Department of Economics, in a CU Boulder Podcasts interview. “What’s really exciting about this study is the fact that we were actually able to measure it using real-world data and simulate it using atmospheric data to confirm these wake effects are real and have real effects on energy production.”

“Wind turbine wakes occur, they have significant impact, but they are also predictable and therefore can be managed,” Julie Lundquist, lead author of the study, wrote in an email. Lundquist is an associate professor in the Department of Atmospheric and Oceanic Sciences at CU Boulder.

She added, “Currently wakes are not managed, but perhaps it’s time to consider establishing coordination.”

“In addition,” he added, “turbine wakes can induce turbulence that can lead to premature fatigue damage of turbine components. As a result, the original wind plant in an area may face reduced energy production and higher failure rates as other wind plants are built nearby.”

But, according to Barr, compelling economic drivers likely will continue to spur project developers to cluster, despite the negative impacts of wake effects.

“There are many significant benefits to clustering wind plants together, that will likely continue to outweigh these negative consequences,” he said. Among the benefits he listed: access to existing power transmission, existing logistics infrastructure, access to regional wind technician labor pools, and local availability of cranes for major component replacements.

“In addition,” Barr said, “the uncertainty of energy production can be significantly reduced, if the wind resource is well-defined based on the operating history of the neighboring wind plant.”

CU Boulder’s Lundquist noted, however, that while the benefits of clustering are shared by all the co-located wind farms, the negative consequences of wake effects are born by the downwind wind farm owner.

“It could make sense,” she suggested, “for there to be a mechanism to distribute that cost in the same way the benefits are distributed.”

The study found that wake effects are much stronger and more prevalent at night.

“It’s not all the time. It’s predictable,” said CU Boulder’s Daniel Kaffine. “The atmospheric simulation modeling gives us some insight into being able to predict how these wake effects emerge, when they emerge, and how big they’ll be, and so we can say something about when we’re likely to see these phenomena.”

The study authors suggested that history offers a potential model for how the wind industry might handle coordination between project developers.

More than a century ago, they recounted, the “rule of capture” freed a landowner to tunnel underground to access a neighbor’s oil resources. But, over time, states stepped in to regulate oil production with measures such as well-spacing and pooling.

But, according to the researchers, “U.S. property law has not similarly caught up with a regime to avoid waste by protecting wind developments from a neighbour’s wake. Nowhere in the United States have legislators enacted laws specifically recognizing or protecting against the damages caused by wind waking.”

They write that efforts to address wind turbine wakes by U.S. policymakers are so far limited to a rulemaking underway at the Minnesota Public Utilities Commission and bills introduced in Congress that would fund research into addressing wake effects. Globally, the extended wake effects observed for offshore wind farms could result in turbine wakes that cross national boundaries, triggering the need for international management of the issue.

“The wind energy is at a point where oil development was decades ago before “unitization” required coordinated development of resources,” said Julie Lundquist. “That could be a good model for how competition between wind farm owners could be managed to maximize energy extraction.”