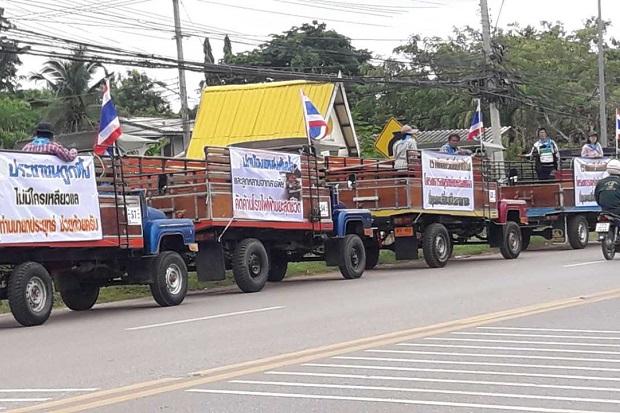 About 1,000 residents of Nong Bua district began a protest on Monday morning against a garbage-fuelled power plant being built in their community, and plan to move to Government House in Bangkok

More than 100 farm trucks, known as e-tuk, were lined up along both sides of Nong Bua-Nakhon Sawan road, ready to take the protesters to Bangkok.

A tent was set up near Wat Nong Klap to collect the signatures of people who are opposed to the plant.

Local police and soldiers from Jiraprawat army camp had been deployed to the site to keep peace and order.

It was reported that officials were trying to persuade the protest leaders not to move out of the area.

At the heart of the protest is a waste-to-energy plant being built in Moo 17, tambon Nong Bua. Construction has begun despite strong opposition from the local community.

The protesters are concerned the plant, to be built and operated by a private firm, would bring pollution and environmental damage to their neighbourhood, and want it scrapped.

Somchai Manakijsirisutthi, 54, said local residents had agreed to intensify their opposition to the project by travelling to Government House and bringing the issue directly to the prime minister’s attention.

He said the community had lodged a complaint with the Damrongtham Centre, and other agencies, but no action had been taken to alleviate their concerns.

Many of the protesters had brought food supplies and bedding materials, suggesting they were ready to stay for an extended protest.

In November last year, the villagers gathered in front of Nong Bua district office to protest against the same scheme. They dispersed after provincial authorities accepted their petition, but pledged to rally against the project until it is cancelled.