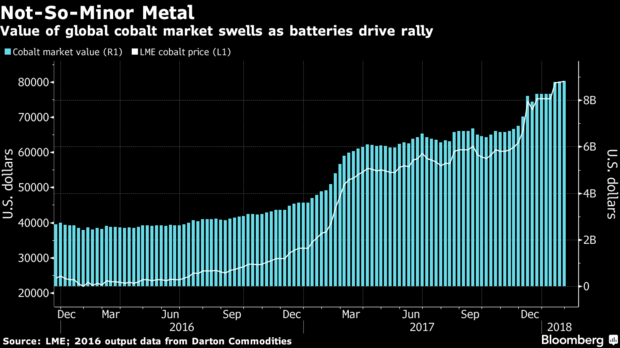 Vale SA reached an agreement to sell future production of cobalt as battery makers look to shore up supply of the metal amid a nascent electric-vehicle boom, people with knowledge of the matter said.

The deal is for about $700 million of cobalt produced at the Voisey’s Bay complex in Canada that predominately churns out nickel, the people said, asking not to be identified because talks are private. Vale’s Rio de Janeiro-based press department declined to comment.

The Brazilian miner has been looking for financing to extend the life of the mine by transiting to underground from open-pit operations and has said publicly that a so-called streaming arrangement was among options.

In streaming, an investor provides upfront funding to miners in exchange for a share of their future output. Historically, they have tended to be for precious metals like gold and silver, but the boom in cobalt prices has added a new commodity to the mix.

Cobalt is a key ingredient in lithium-ion batteries. With the market heavily reliant on supply from the Democratic Republic of Congo, prices have more than tripled in the past two years as companies including Tesla Inc. look to take electric cars mainstream.

On Monday, the government of Newfoundland and Labrador — where Voisey’s Bay is located — will announce a “significant mining initiative” with Vale’s Base Metals Director Eduardo Bartolomeo in attendance, according to statement on local government website.

The statement didn’t give further details.