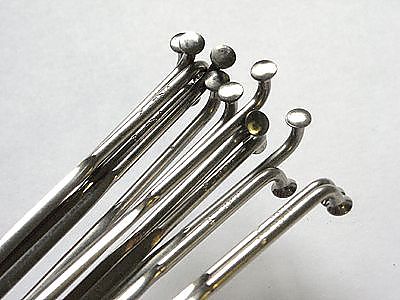 Two companies that make stainless steel spokes in the U.S. are having to adjust to a 25 percent tariff on imported steel. Both brands said so far they’ve been able to avoid price increases.

DT Swiss, which manufactures spokes for the North and South American markets in Western Colorado, so far has been able to absorb cost increases from the tariff, without raising its prices.

Wheelsmith, which manufactures spokes in Wisconsin, so far hasn’t seen a material cost increase because it hasn’t had to buy more stainless steel wire since the tariff took effect June 1. The company said it is considering strategies once the price increase hits.

The tariff doesn’t apply to finished goods, but stainless steel wire is considered a raw material.

Wheelsmith brings in stainless wire from Europe to make straight-gauge spokes. For its double-butted spokes, the company brings in spoke “blanks” from Europe that are not subject to the tariff, because they are considered a finished good. DT cuts and threads the blanks and forms the spoke ends in the U.S.

“On the straight gauge, we’re going to take a hit,” said Chip Barbieri, the CEO & General Manager of DT Swiss, Inc., the company’s U.S. operation. “You try to absorb as much as you can and look at where you can be more efficient, where you can absorb things.”

Barbieri said DT Swiss sources all its wire — for operations in Europe, Asia and the U.S.— from the same vendor in Western Europe. If the company ever decided to source the wire from the U.S., it would have to move all its worldwide production to that source. That’s because of the company’s stringent quality control and consistency standards, and also because it would require DT’s full worldwide volume to persuade a U.S. vendor to make the wire.

“To get wire from the U.S. is easier said than done. There would be a vetting process that would take a long time. We are certainly looking at it, but we’re not going to jump on that quickly. There’s no need to panic.”

Barbieri also said that DT Swiss has applied to the Department of Commerce for an exemption from the tariff, as have thousands of other companies. So far no company has received an exemption.

Darren Campbell, the vice president and general manager of Hayes Bicycle, Wheelsmith’s parent company, said the company will have to make adjustments before its next wire purchase.

“We will be working a combination of things,” he said. “We have to remain competitive on pricing so that’s up to the market. In terms of absorbing the hit, we won’t absorb a 25-percent material increase. We will either need to find a new material source or change our production strategy. There is also the long shot of either the product or the exporting country being granted an exception, or some modified tariff, but we can’t plan on that.”

Wheelsmith imports wire to make all its spokes, so the material cost increase would affect straight gauge and butted.