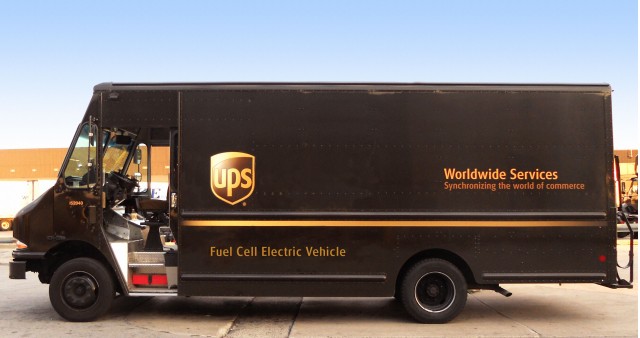 Electric vehicles are not only zero-emission and quieter and more pleasant to drive, they also clearly lower emissions of the carbon dioxide linked to climate change under most circumstances.

For fleet operators who recharge large fleets of electric vehicles overnight, however, the load on electric grids and consequent demand charges pose a significant concern.

The solution to that is energy storage, in which large battery banks are steadily charged over the day, especially at times when energy is cheapest and perhaps greenest.

Now one of the world’s larger fleet operators has embarked on a test of just that solution, in conjunction with more than 100 electric delivery vans in its fleet serving London.

The global parcel-delivery service said on Wednesday it has partnered with Off Grid Energy to solve a specific problem.

That was the length of time and the cost for UK Power Network Services to upgrade the electric supply capacity to the central London depot from which UPS plans to operate its vans.

The companies will install Grid Energy’s Ingenium Universal Battery Energy Storage System, which dynamically moderates the charging to all vehicles connected to it.

The system caps the peak load demanded from the electric grid by the depot and monitors the local substation to ensure that load doesn’t exceed preset levels.

If the recharging vans demand more power than the grid can comfortably handle, the system blends in energy from the battery storage system.

Moreover, the Ingenium system can provide grid stabilization services back to the electric utility when it’s not supporting the recharging UPS vans.

“By offering multi-layered benefits, this technology provides a solution to limited capacity grid issues as well as delivering network support services that, together, ensure the asset works hard for its keep, said Off Grid Energy’s CEO Danny Jones.

The exact same technologies are envisioned for large DC fast-charging stations for electric cars, located along highways, whose operators are concerned about the potential of high demand charges for peak-hour loads during heavy travel times.

The best part is that in some cases, large energy-storage banks use similar or identical lithium-ion battery cells to those used in electric cars.

While it’s early days yet, experiments like the UPS London installation and Tesla’s promises for renewable energy generation at its Supercharger DC charging sites paint a picture of a very different energy future.

And fleets like UPS may be at the forefront of that change, with the service testing everything from plug-in hybrid and range-extended electric vans to deliveries in Florida via electric bicycle.

While individual vehicle buyers often overestimate the miles they drive and overbuy the kinds of vehicles they need, fleet operators know their costs to the penny and understand exactly what they’ll be used for.