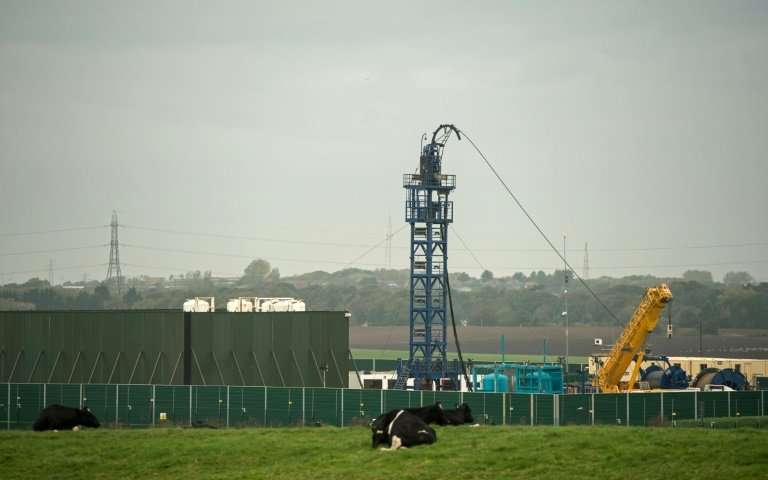 UK energy company Cuadrilla said Friday it has extracted a small but “encouraging” amount of shale gas for the first time since resuming fracking in Britain less than three weeks ago.

The 11-year-old private firm has borne the brunt of protests for trying to test whether fracking—a process in which water and chemicals are used to blast apart rock formations—can unlock natural gas deposits in the UK.

The method has transformed the global energy market but is only developing slowly in Europe.

Cuadrilla released a 12-second clip showing a bright yellow flame light up inside one of the chimney-like structures that stand over a web of pipes drilled deep into the ground.

The gas flare was Cuadrilla’s evidence that fracking at the site was possible. The company said the question now was whether the entire process was commercially viable.

“The volumes of gas returning to surface at this stage are small,” Cuadrilla chief executive Francis Egan said in a statement.

“However it provides early encouragement that the Bowland Shale can provide a significant source of natural gas to heat Lancashire and UK homes and offices and reduce our ever growing reliance on expensive foreign imports.”

Cuadrilla produced small amounts of shale gas at the same site in 2011.

It was then forced to halt operations because two small earthquakes were soon registered in the northwestern part of England where its operations are based.

It resumed work on October 15 after adopting more stringent safety and regulatory measures that environmentalists said were still insufficient.

The company has since been forced to briefly halt drilling on three occasions because minor tremors began being detected deep underground.

Cuadrilla stressed at the time that none of them could either be felt or cause physical damage on the surface.

“This Preston New Road site is being monitored to an unprecedented level,” Egan said in Friday’s statement.

“If we are able to fully test these wells, without compromising on safety, we have the potential to make a major difference to UK energy supply, security and economic prosperity.”

The company said on its website that its tests from 2011 suggest that it can produce 6.5 billion cubic feet (185 million cubic metres) of gas from the Bowland Shale well over 30 years.