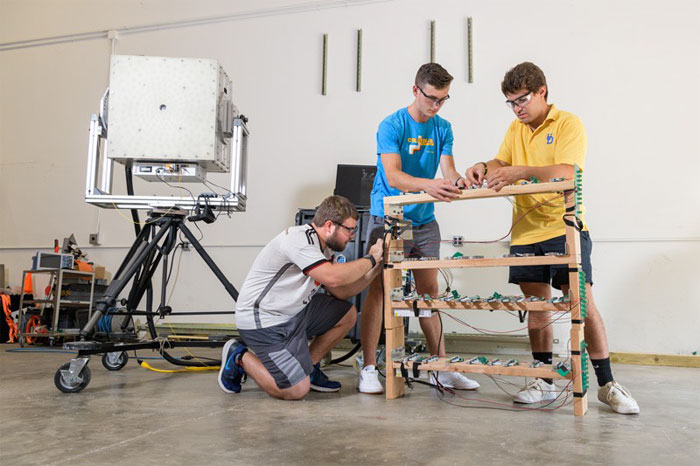 A camera-like device that generates and detects millimeter waves that “see” through solid objects has been built by a University of Delaware (UD) student engineering team. These high-frequency waves, which are more energetic than microwaves but less energetic than IR waves, are not visible to the naked eye. The device produces images as energy is reflected from objects in its path. Like a portable version of the scanners at airport security checks, it can see through nonmetallic objects and detect concealed objects.

The project has received $1.5 million in funding from the Department of Defense to build a new, lighter version of the device and imaging system by the summer of 2019. Under Dennis Prather’s guidance, the team that built the prototype is now refining the device, which started from a modest pile of spare parts.

“Dr. Prather told us that he had a couple of amplifiers left over from a project that had ended a couple years ago that he wanted to repurpose,” said recent graduate William Beardell. The team fabricated the amplifiers into an array and made its own circuit boards to power the device. Prather helped the students understand how electric fields should work in the system and guided them through the build process.

As a UD professor and a cofounder of the startup Phase Sensitive Innovations, Prather is a mentor to a new generation of photonics engineers including UD undergraduates, graduate students, and young alumni.

He said that he “could not be more proud” of the students, whose imaging device has been validated experimentally and now needs to be built for practical use. “That’s where engineering shines,” he said.

In the future, the device could be useful for military operations and for improving security in airports, schools, restaurants, and other public spaces.