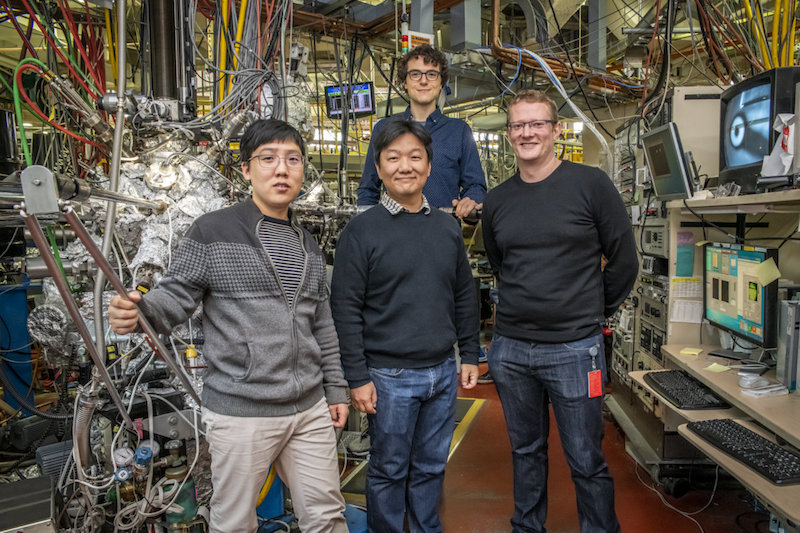 The ultrathin topological insulator sodium bismuthide (Na3Bi) can switch to being a conventional insulator when an electric field is applied. This “off-on” effect, discovered by researchers in Australia, the US and Singapore, could be exploited to make the first ever working transistors from topological materials.

Topological insulators, also known as 2D quantum spin Hall insulators, are materials that are electrical insulators in the bulk but can conduct electricity on their surface via special spin-polarized surface electronic “edge” states. “Electrons travelling along these ‘topologically protected’ states can only travel in one direction and thus do not back-scatter,” explains team leader Mark Edmonds of the School of Physics and Astronomy at Monash University in Australia. “This means they can carry electrical current with near-zero dissipation of energy since back-scattering is what causes electrical resistance in conventional conductors, which wastes energy. The materials could thus be used to make energy-efficient devices like transistors and might even be the answer to the increasing challenge of energy wasted in modern CMOS-based computing, which accounts for 8% of global electricity use, and which is doubling every decade.”

Researchers haven’t been able to test out this hypothesis in experiments until now, however, for want of Na3Bi films less than 10 to 15 nm thick.

Edmonds and colleagues have now succeeded in growing extremely thin, single-layer crystalline Na3Bi. The researchers say they can also control the thickness of a sample and, for example, make a film that is either a single layer thick or several layers thick. They grew their films using a technique called molecular beam epitaxy in ultrahigh vacuum at Monash and at the Australian Synchrotron, as well at the ALS Beamline 10.0.1 at the Lawrence Berkeley National Laboratory in the US.

They studied their material using two very different techniques. The first is angle-resolved photoemission spectroscopy (ARPES), which provides information on the material’s electronic band structure and how it is modified when an electric field is applied. The second is scanning tunnelling spectroscopy (STS), which measures the local density of electronic states as a function of energy to directly probe the energy bandgap.

STS can also make out the topological edge states in Na3Bi when no electric field is applied, proving that the material is topologically insulating in this phase, says Edmonds.

The researchers backed up their findings using density-functional theory band structure and edge state calculations with and without an applied electric field.

Towards the first room-temperature topological transistor

“In a 2D topological insulator there is a band inversion of the valence and conduction bands,” explains Edmonds. “When an electric field is applied, the Stark effect results in band re-ordering such that band inversion no longer occurs. This completely closes the bandgap and then reopens it as a conventional insulator gap (90 meV) – that is, with no band inversion.”

Such electrically driven switching is an important step for applications for materials, says team member Sung-Kwon Mo. Some other research efforts have pursued mechanisms like chemical doping or mechanical strain that are more challenging to control.

“The large bandgaps in both the conventional and topologically insulating phases are also much greater than the thermal energy (of 25 meV) at room temperature, which suggests that ultrathin Na3Bi is suitable for making a room-temperature topological transistor,” adds study author Michael Fuhrer.

The researchers, reporting their work in Nature 10.1038/s41586-018-0788-5, say they are now planning to make an electrical device that can measure the edge current turning on and off along the film edge when an electric field is applied. “This would be a demonstration of the first working topological transistor,” Edmonds tells Physics World.