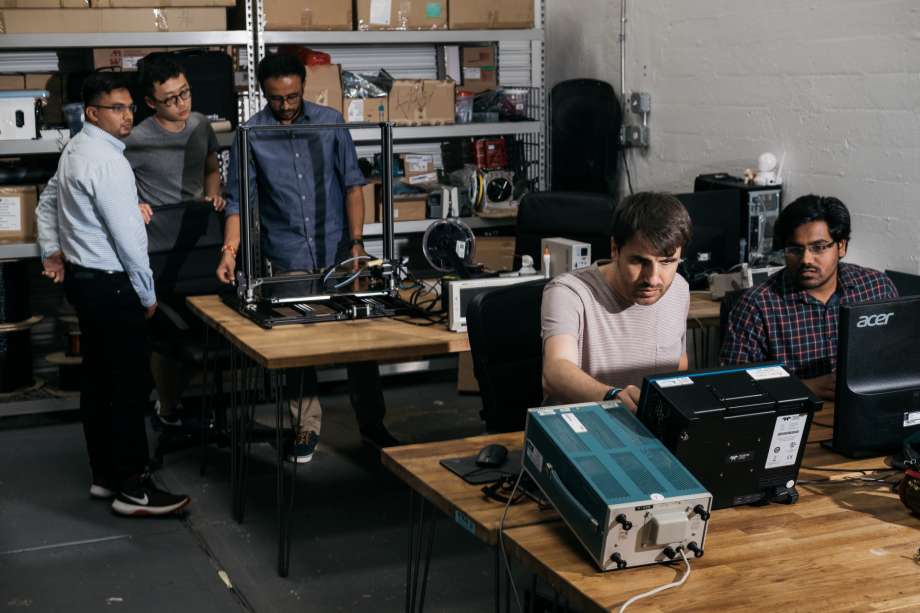 Umer Anwer stops on the street near Tesla’s Brooklyn showroom and grabs his smartphone. He’s looking for a spot to charge his electric car, and the Tesla charging plugs won’t work with the Nissan Leaf he’s driving. In fact, he would prefer not to bother with a plug at all.

Hevo Inc., the wireless-charging startup where Anwer is chief technology officer, aims to overturn the burgeoning industry that’s busy building out a global infrastructure to provide power to electric cars through public plugs. There were about 582,000 public charging outlets worldwide at the end of 2017, according to a recent report by Bloomberg NEF, and that number is forecast to grow by nearly 30 percent this year. Virtually every one of these charging locations uses plugs.

Anwer eventually maneuvers his electric car over a device that looks like a white plastic panel, then presses a button on a smartphone app. After pulling into the parking space, blue dots flash under the windshield to indicate that power is now flowing into his battery. There’s about six inches of empty space between the charger and the car, which has been modified to receive power through an electromagnetic field.

This could represent the future of car charging. Suburban driveways, public spaces, parking lots, and interstate rest stops could all be tricked out with wireless ports to serve the tens of millions of electric cars expected to be on the roads over the next two decades.

Wireless charging, if it catches on, may provide a solution for one of the main questions hanging over electric cars: How can cities accommodate the infrastructure needed without cluttering up streets with posts and wires. In cities like New York, London and Hong Kong, where parking is scarce, it’s difficult to imagine where extra space can be made to accommodate idle cars while they recharge.

Hevo has raised $4.5 million to date in a bid to solve that problem, with funding evenly split between venture capital and government grants. After wrapping up 10 pilot projects across four countries and four U.S. states, the seven-year-old startup is now moving into manufacturing. The company has set up shop in a factory in New York where it plans to soon crank out its first 25 wireless chargers.

Hevo founder Jeremy McCool, a former U.S. Army captain, spent 14 months in Iraq witnessing the consequences of energy geopolitics before enrolling in Columbia University to study sustainable development. Hevo grew out of a school project. “I started the company with no team, no technology and $800,” McCool said in an interview. “Probably the worst and [most] naive way to start a company, by all means.”

The company plans to make thousands of devices in the next 18 months, the volume necessary to make good on the supply agreements he’s signed with carmakers and utilities. McCool declined to identify his clients, citing non-disclosure agreements.

Electric vehicles are projected to undergo explosive growth in the coming years. The International Energy Agency projects that the number of plug-in and hybrid cars on the roads will triple to 13 million by the end of the decade. Over a quarter of all new cars sold annually will be electric by 2030, according to forecasts by BNEF, with the global ranks of electric cars reaching 30 million by then.

Of course, as things stand today, virtually all of these cars would need to be plugged into a socket before they could be charged. Before the world can adopt wireless charging, cars already on the road would need a retrofit and carmakers would ultimately need to tweak their existing designs.

“The equipment on the vehicle is cheaper and more lightweight than existing plug-in charging equipment by a factor of five to 10 times,” McCool said. “We’re also future-proofing for autonomous electric vehicles. If you don’t need a human to park the car, you shouldn’t need to a human to charge the car.”

This technology could also potentially provide a solution to the issue of how to charge electric cars in densely-populated cities. Today, most drivers of the plug-in cars on the road will almost always charge up at home. That requires a garage or a driveway. Installing Hevo’s devices in apartment building parking lots and along residential streets could help open up new markets, from New York to Tokyo, where access to plugs can prove difficult.

“Wireless charging technology has improved steadily and can definitely make charging at home more convenient,” said Colin McKerracher, head of advanced transportation analysis at BNEF. “The most promising near-term applications are en-route charging for buses. For widespread adoption, several major automakers would need to fully back the technology.”

Brooklyn-based Hevo is currently working with three carmakers, two top auto parts suppliers and three energy companies. BMW is already selling a car with wireless charging capability: the 530e hybrid has been available in Germany since May. Daimler AG, the maker of Mercedes-Benz cars, presented the technology as a future charging solution when it launched its S-Class plug-in hybrid, and Daimler spokesman Christoph Sedlmayr said the company will introduce it as soon as it’s “technically fully developed.”

If wireless charging takes off, it may threaten the conventional electric-vehicle charging industry that’s already attracted millions of dollars. Investment into companies building out charging networks rose 165 percent last year to $345 million, according to Cleantech Group, and there have already been 18 deals so far this year totaling $223 million. Other companies, including WiTricity and Plugless Power, are also developing wireless chargers.

Oil companies have made recent moves into charging to allay concerns about losing customers at gas stations. BP agreed to buy Chargemaster for 130 million pounds ($169 million), and Royal Dutch Shell snapped up NewMotion. Both of those companies have built out networks of charging infrastructure in Europe. Several European utilities, from Fortum of Finland to Innogy in Germany, are installing thousands of chargers in garages, parking lots and next to highways across the continent.

If it can be commercialized, technology like Hevo’s may someday shake up these plans.

“Do I think everything will go wireless? Yes, I think so-10 to 15 years,” said Michael Farkas, executive chairman of Blink Charging Co. in Florida, which has deployed more than 14,000 charging stations across the U.S. “You just pull over to a spot. That will be the simplest way to charge a car.”