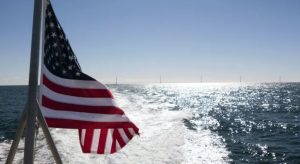 The White House said Thursday it was targeting 15 gigawatts of floating offshore wind capacity by the year 2035, as it looks to compete with Europe and Asia in the nascent sector.

“The Biden-Harris Administration is launching coordinated actions to develop new floating offshore wind platforms, an emerging clean energy technology that will help the United States lead on offshore wind,” a statement, which was also published by U.S. Department of the Interior, said.

The announcement said the 15 GW goal would provide sufficient clean energy to power more than 5 million homes. It builds on the administration’s aim of hitting 30 GW of offshore wind capacity by 2030, an existing ambition which will mostly be met by fixed-bottom installations.

Alongside the 15 GW ambition, a “Floating Offshore Wind Shot” would “aim to reduce the costs of floating technologies by more than 70% by 2035, to $45 per megawatt-hour,” the statement added.

“Bringing floating offshore wind technology to scale will unlock new opportunities for offshore wind power off the coasts of California and Oregon, in the Gulf of Maine, and beyond,” it said.

In a fact sheet outlining its plans, the U.S. Department of Energy said around two thirds of America’s offshore wind potential existed “over bodies of water too deep for ‘fixed-bottom’ wind turbine foundations that are secured to the sea floor.”

“Harnessing power over waters hundreds to thousands of feet deep requires floating offshore wind technology — turbines mounted to a floating foundation or platform that is anchored to the seabed with mooring lines,” it said. “These installations are among the largest rotating machines ever constructed.”

In recent years, a number of large companies have made plays in the floating offshore wind sector.

Last year also saw a number of major developments in the emerging industry.

In Aug. 2021, RWE Renewables and Kansai Electric Power signed an agreement that would see the two businesses “jointly study the feasibility of a large-scale floating offshore wind project” in waters off Japan’s coast.

Norwegian company Statkraft also announced that a long-term purchasing agreement related to a large floating offshore wind farm off the coast of Aberdeen, Scotland, had started. And a few months later, in Dec. 2021, plans for three major offshore wind developments in Australia — two of which are slated to incorporate floating wind tech — were announced.

When it comes to offshore wind more broadly, the U.S. has a long way to go to catch up with Europe.

In comparison, Europe installed 17.4 GW of wind power capacity in 2021, according to figures from industry body WindEurope.

Change is coming, however, and in Nov. 2021 ground was broken on a project dubbed the United States’ first commercial scale offshore wind farm.