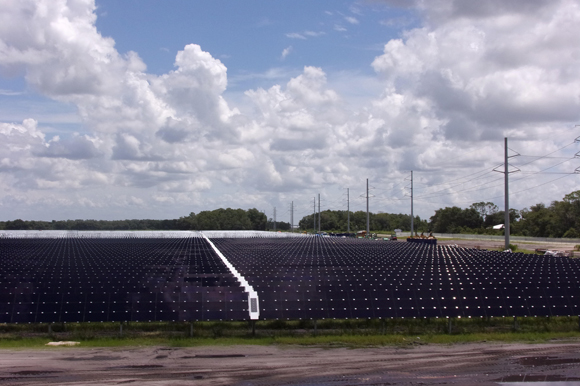 Once online, the 548-acre Balm Solar farm will have the capacity to generate 74.4 megawatts of electricity for some 12,000 homes.

Payne Creek Solar will generate 70.3 megawatts of electricity on 500 acres of land reclaimed from phosphate mining.

“We are excited to see these first two solar projects come online in September,” says Mark Ward, director of renewables for Tampa Electric. “They, along with the eight other solar projects we’re constructing over the next few years, will help minimize fuel costs for our customers.”

TECO invested $110 million in the Balm Solar project. By 2021, the utility plans to put a total of $850 million into solar energy projects, including 10 solar plants generating enough electricity to power over 100,000 homes in Hillsborough, Pasco, and Polk counties.

The panels installed at the TECO farms are designed to track the sun through the sky throughout the day, generating maximum energy.

Although the solar projects are intended to prevent future utility rate hikes, the recent projects will come at an added cost to consumers of $1.85 to offset TECO’s construct costs, reports the Tampa Bay Times. The rate increase will take effect September through December 2018. Through the end of 2018, TECO expects its customers will save $3.3 million in fuels costs thanks to the utility’s increase in solar.

The utility faced criticism in March for a solar proposal farm proposal in Pasco County, according to the Times, as residents were worried that the project would detract from the area’s rural landscape. Ward said that the new projects have received community support.

“Balm Solar will be a good neighbor,” he says. “Solar projects produce no noise, no emissions and do not increase traffic.”