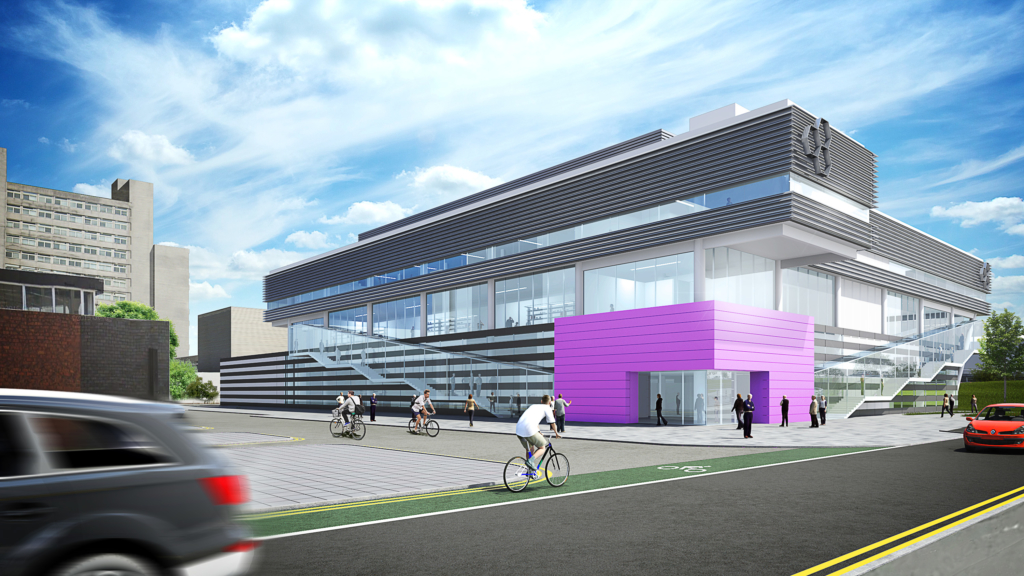 “It surprises me that people are still interested in graphene,” Kostya Novoselov told attendees at the launch of the second world class graphene centre in Manchester, UK. Novoselov was awarded the 2010 Nobel laureate for his work isolating the material alongside Andre Geim at the University of Manchester. His remark highlights how unusual it is for an area of research to be simultaneously prolific in both fundamental discovery while finding its foothold in industry. That two institutes dedicated to both diverging aspects of the same material have found room to coexist in one city speaks volumes about the continued perceived potential of research in graphene and related materials, as well as the investment they still manage to attract. Can it outlive the hype? The level-headed engineers and partners at the Graphene Engineering and Innovation Centre (GEIC) put a forward a convincing case that it can.

Launched on Tuesday 11th December 2018, the GEIC aspires to provide a space that helps bridge the notorious gap between academic innovation and real-world take up within industry. The phrase “fail fast” recurs throughout the launch, suggesting an Edison-like ethos embracing not just successful commercialization of new technologies but also the many inevitable and informative failures along the way. The $60million Masdar Building housing the GEIC provides a space where industry large and small can pursue projects that might be too risky or even expensive for their own facilities. As well as both industry-standard and bespoke graphene equipment the centre is staffed with engineers with extensive industry and commercial experience, as well as expertise in graphene.

On brand, the staff and engineers all hot-footed around the centre in flashy green graphene trainers. Products have incorporated graphene for a while but largely as a gimmick for marketing. In contrast these trainers genuinely exploit the thermal and mechanical properties of graphene to enhance their durability.

BAC exhibited the BAC-MONO, a car that uses a graphene composite as part of the body work, exploiting graphene’s strength to reduce the mass of that part by 20%. The next step is to replace the rest of the body work. From aerospace, University of Lancashire Juno team brought a demonstration drone, again leveraging mass reductions but also using the material’s conductivity for protection from lightning strikes.

Also exhibited at the launch was the ability to alter the thermal emissivity of graphene devices with an applied field, enabling thermal cloaking from an infrared camera. Other partners have used capacitance changes with applied pressure for applications ranging from sensing and diagnostic contact lenses to robotics and a talking Tshirt.

One area the GEIC does not aim to cover is the role of graphene in life sciences, since the specific facility needs for this sector are already catered for in University of Manchester. Nonetheless there were demos of how the large surface area and low cytotoxicity of graphene-related materials can lend them to functionalization with radioactive labels for medical imaging.

Big companies hate risk, which makes their uptake of graphene particularly significant. Speaking to delegates about the uptake of graphene by companies like Ford who have used it in their engine bay, Graphene@Manchester CEO James Baker suggested that commercialization of graphene was teetering at a tipping point where it could really take off.

“I think graphene is already out there in products,” added Ian Kinloch, Director of Materials at University of Manchester’s School of Materials, suggesting that Ford as an example didn’t shout about the use of graphene in their cars because the material’s properties gave them a competitive advantage and they didn’t think consumer knowledge of the graphene contribution would sell more cars. “I think the applications are already out there and it will only leak out gradually over time that those products are using graphene, so I think the tipping point is already here.”

Travelling from across Europe and Canada to attend the GEIC launch, suppliers expressed their interest in droves. Stephen Hutchins, Technical Sales Director from Talga Technologies Limited – the product research and development strand of a company that owns natural mineral reserves in Sweden –told Physics World that their company had originally focused on mining. However finding themselves in possession of the Nunasvaara graphite deposit, which claims to be the highest grade JORC/NI 43-101 graphite mineral resource in the world, they decided to try moving up the supply chain and engage with producing graphene themselves.

Zen Graphene Solutions in Ontario is also looking to capitalize on their 1.4 million tonne graphite resources, which they describe as the largest and only high purity hydrothermal graphite mineralization being developed in the world. A shortage of carbon has never really been the limiting factor in getting graphene to market but as their Head of Sales Phil Chataigneau explains, the flash precipitation of methane and carbon dioxide that produced the graphite affected the spacing between the carbon layers, facilitating production of high quality graphene.

One of the stumbling blocks for industry has been the abundance of different types of graphene with varying purity, crystal quality and numbers of graphene layers, which all affect what sort of applications it will be suited to. The National Physical Laboratory (NPL), which led on the development of the ISO Graphene Standard and the the Graphene Service, is a Foundation partner with the GEIC. Its aims are to support the creation of a graphene community and and ecosystem within the GEIC to encourage early stage development and collaborations. Together with the National Graphene Institute, NPL has produced a guide for good practice and definitive terminology for graphene.

Graphene was once talked about as the new gold. At the time it was isolated mechanically by exfoliation, a production approach that is only viable at small scales so that a kilogram would cost hundreds of thousands of dollars. Engineers and manufacturers working with ultrasonic and chemical exfoliation and chemical vapour deposition have pushed this price point down below $50 dollars a kilogram, so now the cost of graphene is not the issue. Even BAC’s graphene-enhanced sports car, with a maximum speed of 170 mph, an acceleration of 0-60mph in 2.8 seconds and only 30 units of that model in the world demands a comparatively modest price of £140,000.

Graphene may be cheap but it still attracts big money. The graphene sell was so attractive to energy giant Masdar that they provided 50% of the funding for the GEIC as well as their name. (The building housing the GEIC is named the Masdar Building.) The rest of the money came from the UK and Europe. Dispelling concerns over the effect of the UK’s withdrawal from the EU on the centre, Baker suggests the GEIC could help graphene “de-risk Brexit”. He adds that as for future extensions of the centre, he hopes to draw primarily on commercial investors anyway.

The GEIC opens for business in January 2019.