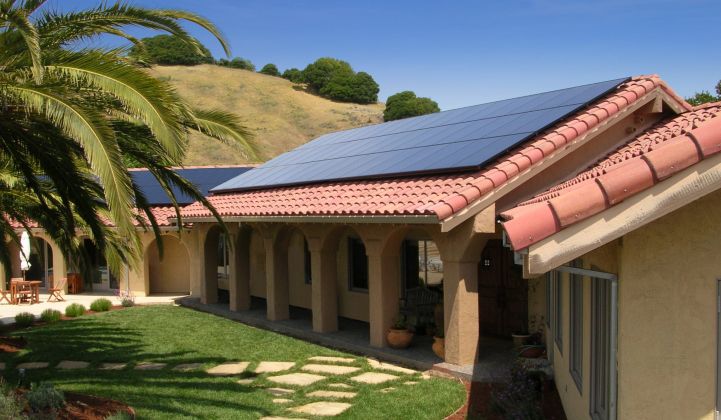 The company’s utility-scale self-development team is now down to around 10 employees, as SunPower executes on its strategy to focus on residential and commercial and industrial projects, said CEO Tom Werner, in a recent interview.

Most employees in that group have taken other jobs at SunPower or have moved on to other companies, with very few staff members formally laid off, he said. Among those who remain on the utility-scale development team, some have agreements to transition out by the end of the year.

“So what we’re really doing is pivoting away from a market we feel is maturing, to a market we think is just emerging and we can be a pioneer and an innovator in — and that’s becoming more like a solar energy services company,” he said.

In the commercial solar segment, SunPower already deploys energy storage and adds a layer of software to provide demand management. The company is now working to offer additional services, including rate arbitrage and wholesale market participation, although Werner admitted it’s early days on that front.

SunPower expects to do 2.5 megawatts of demand charge management in the back half of this year, and about 5 megawatt-hours of energy storage.

Going forward, SunPower will serve the grid-scale power plant market exclusively through equipment supply and services. Sales in this segment will be centered on SunPower’s P-Series solar module and Oasis trackers, as well as site design tools such as drone imaging. Werner said he still expects this arm of the business to be about 1 gigwatt this year.

The new strategy, first announced a year ago, seeks to move SunPower toward profitability as the company also copes with solar tariffs, looks to complete the SolarWorld acquisition, and ramps up production of its Next Generation Technology (NGT) modules. To that end, the company recently completed the sale of its joint venture Yieldco 8point3 for $360 million in proceeds last quarter, and announced the sale of its microinverter business to Enphase on as part of a broader de-leveraging strategy. On August 9, Enphase announced the deal had officially closed.

Management is also in talks with potential buyers for what’s left of its grid-scale solar development business, according to analysts at Credit Suisse. A sale appears likely in the second half of this year.

SunPower has cumulatively self-developed around 4 gigawatts of utility-scale power plants to date. At its peak, the utility-scale solar development business represented one third of the company’s revenue. But the market outlook is less sunny.

Power purchase agreement prices have dropped precipitously over the past few years, making the competitive landscape trickier to navigate. SunPower modeled what it would take to win contracts in utility-scale solar development going forward, and found that that market was playing to strengths of larger companies with lower cost of capital and longer investment horizons, said Werner.

The company also decided to give up on utility-scale project development in order to focus on developing its next generation cell technology. There’s high capital intensity associated with the solar power plant business, “so to have multiple businesses competing for capital sources was also a reason to focus more,” Werner said

The strategy shift is also due to reduced demand for utility-scale solar stemming from Chinese subsidy reductions. With lower global demand, prices are expected to fall, boosting the desire for cheaper standard-efficiency crystalline-silicon solar panels, as opposed to SunPower’s higher-priced high-efficiency modules.

Werner also highlighted in the interview that SunPower’s legacy strength is in distributed generation. “We’re the hometown player in America for distributed generation and have been the pioneer of residential solar all the way back to 2004 when we created the independent dealer network,” he said.

But, like the utility-scale market, distributed solar has its issues.

The U.S. residential solar sector is expected to see flat growth this year, which represents a recovery from a recent market slow-down.

Distributed commercial and industrial solar has seen strong growth in recent years, with more than 2 gigawatts of new corporate installations deployed in 2017, according to GTM Research. However, corporate solar procurement is forecast to slump in 2018 as the market readjusts from the growth spurt.

Werner believes SunPower is poised to succeed despite these headwinds.

“Being the incumbent player with a superior module technology, we’re confident that even in an in-line market, or an market that’s not growing, we can gain market share,” he said.

The numbers show that the strategy shift is starting to bear fruit.

SunPower’s total U.S. residential and C&I deployments now represent 5 gigawatts across more than 500,000 systems. The company is also seeing increased customer interest in energy storage with an attach rate of 35 percent, according to the company’s earnings deck.

Overall, the company beat performance expectations for the second quarter. According to Credit Suisse, splitting the company into upstream and distributed generation segmentation allows for more “independent decision making at the segment level,” which has allowed for a smaller corporate footprint with an under $40 million annual overhead expense run rate.

Management also highlighted on their earnings call last month that SunPower’s high-efficiency panels dominate the premium segment of the distributed generation market, with customer economics driven by increasing retail electric rates and the increasing affordability of solar plus energy storage. The company forecasts its distributed generation business will grow 40 percent by 2023.

SunPower serves the DG market largely through its dealership network. That relationship goes beyond solely supplying equipment, but due to its unique structure GTM Research does not track SunPower’s presence in the residential and commercial and industrial markets in the same way as its competitors.

“You couldn’t say SunPower is the developer on those projects,” said Allison Mond, solar analyst at GTM Research.

In residential solar, SunPower is a major third-party solar financier, she added. But the company still lags behind Vivint and Sunrun. When it comes to offering energy services, Mond noted that SunPower is playing a bit of catch up.

“I think they just know that’s where the market is headed and you have to be able to do solar-as-a-service and have the system [and the grid] work together,” she said. “Whether they’re able to pull it off … I don’t know.”

The transition out of utility-scale solar development is taking place as SunPower simultaneously ramps up its solar manufacturing business.

The company launched production of its Next Generation Technology modules in the second quarter and plans to achieve volume production in the fourth quarter of this year. NGT panels are projected to achieve efficiency of 23 percent or more. The lower efficiency P-series panels will be targeted at the utility-scale solar market.

SunPower’s announced acquisition of SolarWorld also factors in to its manufacturing plans. SunPower proposed the purchase in response to new import tariffs put in place by the Trump administration.

Werner said his company plans to qualify SolarWorld America solar cells in coming months to be used in SunPower’s P-seris products, which is a little bit different use for the company than initially planned. Werner said he also continues to be confident that the SolarWorld acquisition, once complete, will help SunPower secure a tariff exemption.

“We’re continuing to work toward closing that transaction,” he said. “There were some things that took longer than expected but we do expect to get things wrapped up this quarter.”

“We think creating a more competitive SolarWorld is exactly what the administration wanted,” Werner added. “And we rain committed to accomplishing that.”