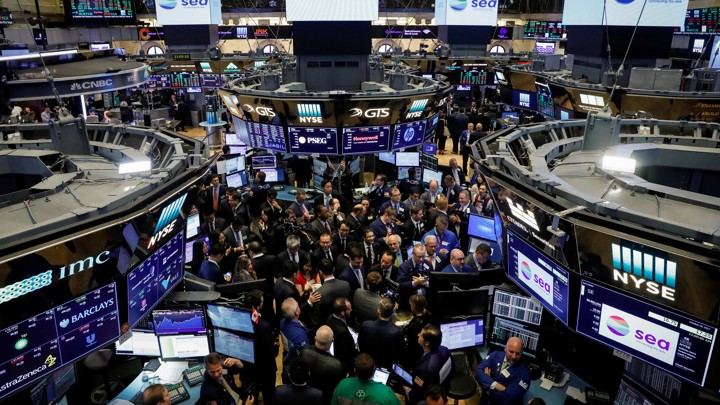 The dollar traded higher vs. the euro and the yen. Oil prices fell, with West Texas Intermediate down 0.4% and below $74 a barrel. Bonds climbed, sending the 10-year Treasury yield down 3 basis points to 2.83%.

Locked and Loaded For Trade War

Uncertainty over trade issues deepened on Sunday, when Canada launched its tariffs on $12.6 billion of U.S. imports into the country. In addition, President Donald Trump added weight to the potential for increasing U.S. tariffs on imported autos to 20%. The European Union delegation to the U.S. on Friday had identified $294 billion in U.S. exports it said “could be subject to countermeasures” if U.S. did raise its auto import tariffs, according to the Wall Street Journal.

On Monday, the lobbying powerhouse U.S. Chamber Of Commerce launched a campaign to oppose Trump’s tariff-based trade strategy. The group said the policies threatened to undermine positive economic moves made by the administration. “We should seek free and fair trade, but this is just not the way to do it,” Chamber President Tom Donohue told Reuters.

China’s stock markets will be key to watch this week, as the game of chicken continues over the U.S.-China trade brawl. U.S. tariffs on $50 billion in goods imported from China are set to go into effect Friday. China plans to launch retaliatory tariffs on a similar range of its imports from the U.S. Declines on each country’s stock market are likely to figure powerfully into the leverage each country wields at the negotiating table.

The Shanghai Composite careened 2.5% lower Monday — the index’s largest one-day decline this year. The market has fallen for six straight weeks, crossing into bear market territory on June 19. The Hong Kong stock exchange was closed for one-day holiday on Monday.

Cisco Systems and Chevron (CVX) each dropped 1.4%, the worst decline on the Dow.

Nike slipped 0.4%, due for a pause after spiking 11% to a fresh high on Friday, following a turnaround in North American sales. Shares are extended above a 70.35 flat base buy point, as well as a rebound from support at the stock’s 10-week moving average.

Tesla powered up nearly 6% at the open, after a Sunday tweet from Chief Executive Elon Musk announced the company had hit its production target of 5,000 Model 3 vehicles last week, and had turned out 7,000 autos overall. The number 5,000 Model 3 rolled off the assembly line on Sunday. The BBC reported that Musk said in an e-mail “I think we just became a real car company.”

Dell Technologies surged 8.3%, VMware leapt nearly 5%, after privately-held computer maker Dell said it would would acquire the shares tracking its 80% ownership in VMware. Shareholders will be able to convert each share of DVMT into 1.37 shares of Class C common stock, or $109 per share, implying to total deal value of $9 billion. Vmware plans to distribute an $11 billion special dividend tied to the Dell Technologies deal. Found Michael Dell reportedly owns 72% of the Dell Technology parent, which plans to list its shares on the NYSE following the exchange.

Dell Technologies ended Friday just below a 90.96 buy point in a cup-with-handle base.

Researcher Markit releases its June manufacturing index at 9:45 a.m. ET. The institute for Supply Management’s June Manufacturing gauge is due at 10 a.m.ET, as are May construction spending estimates from the Commerce Department.