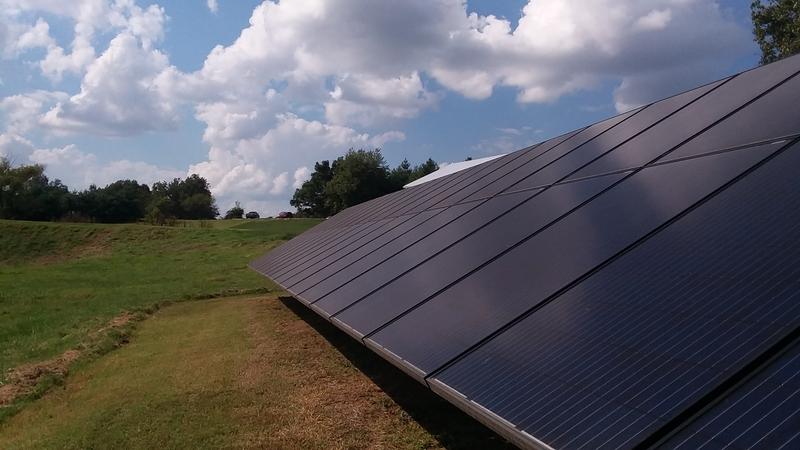 Solar panels are popping up around Kentucky, including five major solar projects in the western, eastern and northern parts of the commonwealth. Of the 4,000-plus homes in Kentucky powered by solar, one couple in the far western region recently opened their doors to visitors interested in the growing market. Cory Sharber took a tour of their solar-powered “dream house.”

White solar panels lined the roof of a yellow house tucked away in rural Graves County. The home featured a pond stocked with fish, a chicken coop next to a garden, a couple of border collies and a large solar array in the backyard.

People gathered in the living room to hear from guest speakers about the benefits of solar power and why they should consider converting their homes. Homeowner Leslie McColgin says that she became energy-conscious after the gas shortages of the 1970s.

“I had to have a locking gas cap because people were stealing gas out of people’s cars and there were long lines at gas stations, so it’s just part of my consciousness,” McColgin said.

McColgin and her husband George Kennedy have been talking about getting solar panels on their home since the 1990s. When they started building their dream house, they decided it was time to bite the bullet.

“George kept saying, ‘Well, let’s wait a little bit,’” McColgin said. “‘Let’s wait until the price gets better.’ Finally, we just reached a point where we were able to do it and the price has gotten better since we got it. That’s going to happen.”

They built their house two and a half years ago around the principle of energy efficiency. Kennedy says the solar panels are a 10.1-kilowatt unit, which provides 50 percent of the home’s power. He said it’s one of the biggest that can be installed in a residential home.

“What it does is it produces about 14,000-kilowatt-hours so that the home can use it,” said Kyle Johnson, a sales manager with Harvest Energy Solutions, a company that installs similar projects across the midwest. “If the home is not using it when it’s producing, it exports it back to the grid which then, Leslie and George get a credit on their bill at the end of the month for it.”

Johnson said homeowners can get a 30 percent federal tax credit for installing solar units. It can also help save on electric bills. So how much did it cost McColgin and Kennedy?

“The initial price — we got a rebate right away — so after you get the rebate you’re down to about $21,000 with your tax credit that you get the first year,” McColgin said.

McColgin said with the money they’re saving and through their budget, they plan to break-even in about seven years. And the cost of solar is falling. According to the Solar Energy Industries Association, in 1998, the average price of a residential system was $12 per watt. In 2014, it was $4, but Kennedy says it’s not about the money.

“We’ve got other options that we need to start exploring and the sooner we do it, the sooner we’re going to get there,” Kennedy said. “We can’t stop progress.”

According to the U.S. Energy Information Administration, coal-fired power plants generated four-fifths of Kentucky’s electricity in 2017. The Solar Energy Industries Association said, as of the first quarter of 2018, solar only generates less than one-tenth of one percent. McColgin and Kennedy believe there’s a natural antipathy to change. Kennedy says people are used to getting their energy from coal.

“Banking your future, the world’s future because this guy wants to make $100,000 a year so we can burn more coal, that’s just shortsighted,” Kennedy said.

A study from Yale University says the main adopters of solar appear to be in suburban or rural areas. Also, wealth and population size are not the most determining factors of adoption, it’s your neighbor. A study revealed that if a person’s neighbor uses solar in their zip code, or on their street, then they’re more likely to adopt. Johnson says solar is not the complete answer.

“We have to have a diversified grid where we get our energy from solar, geothermal, hydro, natural gas, all of these sources,” Johnson said. “If we put all of our eggs in one basket, that basket could fall out one day and we’re stuck.”

Johnson said the decision to ‘go solar’ comes down to dollars and cents and solar could ease some of the burdens of rising electric bills.