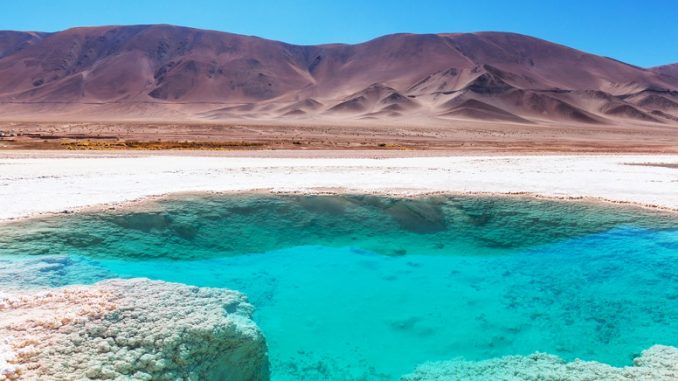 The lithium industry needs to modernize and upgrade its extraction processes if it is going to keep up with escalating market demand for battery grade lithium.  And as Bloomberg reports, the world needs a lot of lithium– fast.

The industry needs a modernizing evolution because extraction methods border on archaic – the process was designed around the 1960’s, and it hasn’t been advanced because the demand for battery-grade lithium materials has only really taken off in the last few years.

Currently Albemarle is the only company producing lithium inside the United States – in Nevada’s Clayton Valley. Companies like  Chilean multinational Sociedad Química y Minera, Nemaska Lithium and Lithium Americas are scrambling to speed up processes.

A main reason for Tesla’s existence is that Lithium ion batteries have a high-enough charge capacity to make Battery Electric Vehicles viable.

Headquartered in Vancouver, the junior mining company capital of the world, Standard Lithium is building an impressive portfolio of brownfield U.S. based lithium brine assets,  fast-tracking a path to production and linking lithium carbonate to global markets ­from its project sites deep in the investor heartland of the United States.

“Batteries are now 40 per cent of the use of lithium worldwide – and it’s going to be approaching 60% by 2020,” Mintak said. “The industry is now looking for an evolution. It’s at a tipping point where brine producers need to step up their game if they’re going to compete with hard rock producers to bring projects online quickly.”

“The industry has been operating, basically, with mid-20th century technology for the past 50 plus years. Over half of the lithium can be lost when it is being extracted from the ground because the process is so rudimentary. A lot of companies are chasing after modern processing.”

In January, Standard entered into an agreement with Canaccord Genuity, as sole bookrunner and lead underwriter on behalf of a syndicate of underwriters. The Underwriters agreed to purchase 9,530,000 units of the Company for $20 million. Standard also signed an agreement with TETRA Technologies for up to 33,000 acres of brine leases in a key production fairway in Southern Arkansas.

Standard has two Lithium brine projects: Bristol Dry Lake in California’s Mojave Desert, and the Smackover Project in Southern Arkansas. At both sites, but especially in Arkansas, the company is set to revolutionize the Lithium Industry by applying modern processing methodologies with the goal of fast-tracking production – bringing the lithium recovery from brine process time down from as long as two years to an astonishing 72 hours.

The location of the Smackover projet is ideal, the agreements that Standard has signed allows them immediate access to brine, and the Arkansas project sits in close proximity to key infrastructure already in place.  The site is close to the ports of the Gulf of Mexico.

Until now, no one has built a new lithium project using modern extraction methods.

Standard Lithium is demonstrating faster production through its immediate access to thousands of litres of brine with good lithium concentration. This modernized, 72-hour selected extraction process is a game changer, Mintak said.

“In the same way that shale, or unconventional oil, affected the oil and gas industry, a modern, selective extraction process will reinvent the way people look at lithium projects,” he said.

Mintak says the best place in the world to demonstrate that is Arkansas. “We have everything we need; we have brine that is rich in lithium — it can be produced in amazing volumes.”

“Generally exploration companies chase after grade all they want – but lithium projects these are chemical processes facilities, you need manpower, infrastructure, re-agents and water to name a few if aim to produce high-quality, high- margin materails that the end user is going to require,” Mintak said.

Standard is pioneering a range of new technologies, and in addition to aligning with existing permitted operators like Tetra, Standard is working with  a range of  technology partners to apply the right process technology appropriate to the  project.

“We knew the only significant, large-scale opportunity in North America where we could execute our business model was in Arkansas. “We recognized that we couldn’t secure a large land position by ourselves because the mineral claims reside on private property, so we built a great relationship with an operator there, and that relationship has allowed us to turn Arkansas into arguably the biggest opportunity in the Lithium space right now.”

“It is the best showcase in the world for a modern lithium process to be staged.”

Infrastructure exists on the Smackover site that doesn’t exist on other Lithium sites in remote locations, such as high-altitude sites in South America.  At the Arkansas site, producers have been extracting for decades, with billions and billions of barrels of brine successfully pulled out and put back into the basin.

“The infrastructure is amazing, we have a highly trained workforce of brine handlers, and we’ve put together a really strong team of technical engineers who are very familiar with the chemistry process required – extraction experts,” Mintak said.  “We’ve aligned ourselves with the current operators in Southern Arkansas to manage to secure the only large land lease available.”

Mintak believes that this  is the only available chunk of brine leases that producers can access now. It could take years for competitors to try to piece together a land package.

Standard also signed an agreement to build a pilot plant adjacent to one of the existing brine processing chemical facilities in Southern Arkansas, where they will be able to tie into an existing pipeline, gain access to the existing brine supply, and work inside a permitted facility. And for the initial demonstration pilot plant stage, brine will also be shipped from Standard’s California site to Arkansas by rail car enabling the company to run both projects through the same test facility.

“We’ve got the perfect alignment, with the agreements and projects that we have secured, to demonstrate and build a US lithium asset utilizing a modern process,” Mintak said. “While other companies are chasing around, saying they are working on around trying to do it, we have access to all the elements required. It’s already underway, we are working on this everyday. And we’re going to build upon it.”