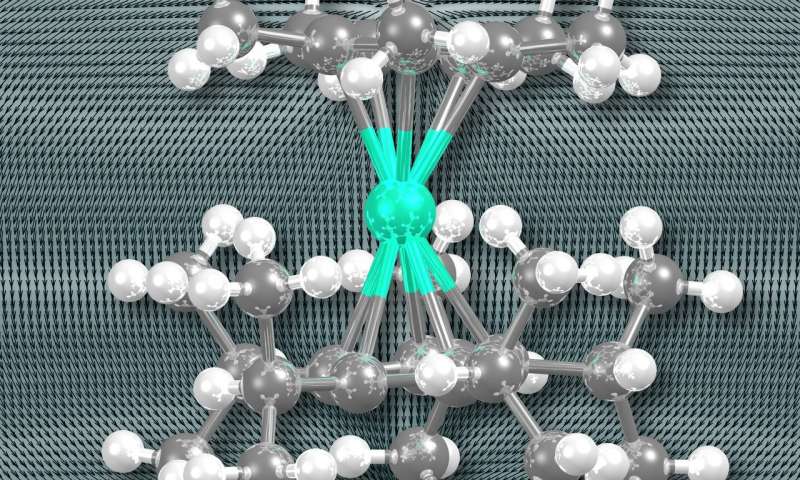 A team of scientists led by Professor Richard Layfield at the University of Sussex has published breakthrough research in molecule-based magnetic information storage materials.

The group at the University of Sussex, working with collaborators at Sun-Yat Sen University in China and the University of Jyväskylä in Finland, report a new single-molecule magnet (SMM) – a type of material that retains magnetic information up to a characteristic blocking temperature.

Writing in the journal Science, Professor Layfield and his co-authors explain how they successfully designed and synthesized the first SMM with a blocking temperature above 77 K, the boiling point of liquid nitrogen, which is both cheap and readily available.

Previously, it was only possible to synthesize SMMs with blocking temperatures reachable by cooling with expensive and scarce liquid helium.

Professor of Chemistry, Richard Layfield, said: “Single-molecule magnets have been firmly stuck in the liquid-helium temperature regime for over a quarter of a century. Having previously proposed a blueprint for the molecular structure of a high-temperature SMM, we have now refined our design strategy to a level that allows access to the first such material.

“Our new result is a milestone that overcomes a major obstacle to developing new molecular information storage materials and we are excited about the prospects for advancing the field even further.”

SMMs are molecules capable of remembering the direction of a magnetic field that has been applied to them over relatively long periods of time once the magnetic field is switched off.

As such, one can “write” information into molecules leading SMMs to have various potential applications, such as high-density digital storage media and as parts of microprocessors in quantum computers. Practical applications have, however, been greatly hindered by the fact that SMMs are operational only at extremely low temperatures. Their intrinsic memory properties often vanish if they are heated a few degrees above absolute zero (-273°C), meaning SMMs can be only studied under laboratory conditions by cooling them with liquid helium.

The discovery of the first high-temperature SMM means developments could be made in the future to massively increase the storage capacity of hard disks without increasing their physical size.