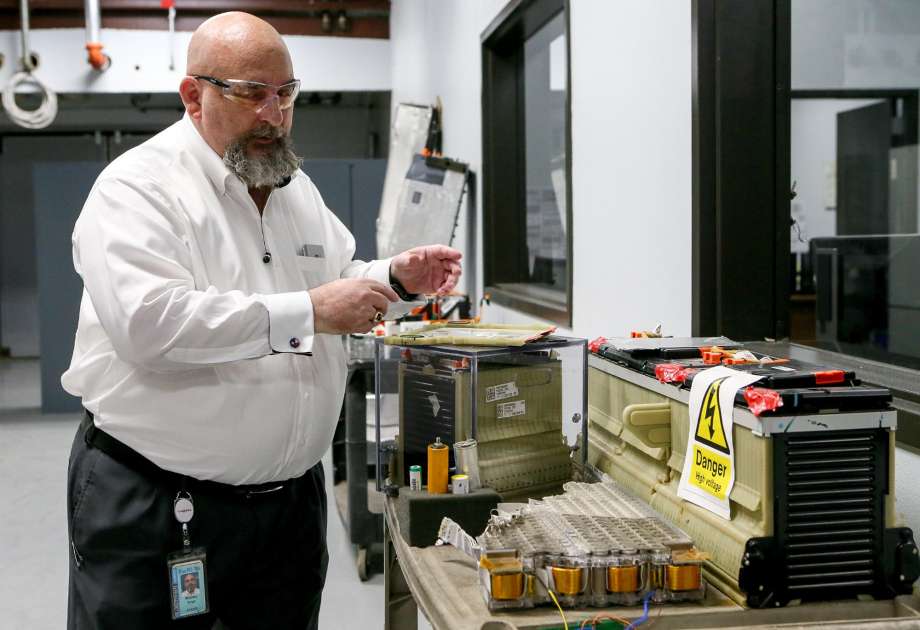 Two technicians sat at a bank of screens, pumping electricity into a battery in the adjacent cinder block room and watching temperature readings rise as the battery’s charge reached double what it was designed to hold. The metal clamps holding the battery in place bowed from pressure building inside the expanding battery, but still the technicians kept cranking up the juice.

Finally, Mickey Argo called a halt to the test, which ended without the battery bursting into flames. Pass.

“We could have 100 (gasoline-powered) vehicles nationwide catch fire, nobody cares,” said Argo, assistant manager for the battery program at the Southwest Research Institute, a San Antonio research and development company. “One electric vehicle catches fire, and it’s national news.”

This battery is one of more than 650 tested here since February, when the Southwest Research Institute — which provides research and development services for automotive, military, energy and other applications — opened its new battery testing center at its sprawling campus on San Antonio’s West Side, tapping into the growing demand for batteries as more vehicles go electric. What happens at the institute could prove vital to the spread of hybrid and electric vehicles as engineers and scientists work to improve the performance, range and safety of the next generation of batteries that analysts say will transform transportation.

With concerns about climate change growing and governments around the world moving to limit emissions, car manufacturers are moving to expand their offerings of hybrid and electric vehicles. In March, Ford Motor Co. said it was going “all-in on hybrids,” including introducing a hybrid version if its top-selling Ford F-150 pickup truck in 2020. In July, Volvo Cars said all its vehicles would feature electric motors starting in 2019, and it would launch five fully electric models through 2021.

Although electric vehicles account for only tiny share of the nearly 90 million cars sold around the world, their market is growing quickly. Global sales of electric cars hit 1.2 million in 2017 and are expected to grow 30 percent this year to 1.6 million, according to the market research firm Frost & Sullivan. More than 3 million electric vehicles were on the roads worldwide last year, the International Energy Agency reported in May, with 40 percent of them in China.

Still, the higher prices of electric cars continue to present a barrier to their wider adoption, the IEA said, citing batteries as “the most important cost component for EVs (electric vehicles).” Finding ways to cut those costs is where the battery researchers at the Southwest Research Institute come in.

The Southwest Research Institute has tested car battery technology since 2010, putting some 40,000 batteries through aging, extreme temperature, and physical abuse tests. The institute’s clients include both individual auto makers and the Energy Storage System Evaluation and Safety Consortium, a group of manufacturers organized by the institute. The companies, which make vehicles ranging from passenger cars to trucks to locomotives, work together to advance battery technology.

The testing done at the Southwest Research Institute and other R&D centers is vital to achieving that goal, said David Tuttle, a research fellow at the University of Texas at Austin’s Energy Institute.

“When you push the envelope forward on making the batteries safer,” said Tuttle, who studies electric vehicles, “that might also allow the manufacturers and the developers of those batteries to eke out some more performance (and) lower the cost in some way.”

The battery testing center is housed in a 12,000-square-foot building set up with 10 battery testing chambers — big boxes where technicians run charging cycles. The tests evaluate how batteries perform in extreme heat, cold and other conditions.

Among the key goals of the testing program are lowering the costs and improving the reliability of batteries used in transportation. Think of a cellphone. After three or four years, its battery might become spent, but you can easily and cheaply replace it, said Chris Chadwell, the assistant director of the institute’s engine research program.

But that would hardly be practical for most car owners, who invest tens of thousands of dollars in their vehicles. Replacing an electric car battery could cost more than $15,000 depending on the size of the battery, Chadwell said.

“If you want your hybrid vehicle to be less expensive or get better fuel economy, then this work is important to you,” said Terry Alger, director of the engine research program. “The work we’re doing is to try to help them either reduce their cost by making the batteries last longer or being able to get more out of a given battery so you can spend less … We’re helping them be more efficient.”

Tuttle, the UT researcher, said the electric car market has reached a tipping point. For years, auto makers had little interest in electric cars, making stripped down versions primarily to meet state mandates in California, the nation’s biggest auto market. But today, with the success of new competitors such as Tesla, traditional auto makers view electric vehicles as a growing business opportunity, adding features and improvements to appeal to a broader market, Tuttle said.