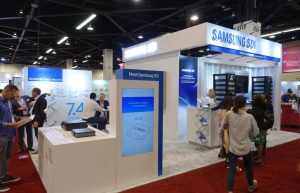 Tesla introduced the world to the 4680 battery cell. At 46 millimeters in diameter and 80 millimeters long, it was supposed to be ne plus ultra of batteries — the perfect size for getting the most bang for the buck out of an EV battery pack. But Samsung SDI has other ideas. It is working on 4680 battery cells for Tesla, which is the biggest game in town, but it is also trialing shorter versions of the “fat cells” it hopes to provide to other manufacturers like Volvo, BMW, and Stellantis.

According to Korean news source The Elec, manufacturers could stack two levels of 4640 cells one on top of the other to create a dual level battery pack. While that arrangement may be somewhat heavier and cost more than a single layer of 4680 cells, it could offer benefits such as better control of battery cell temperatures within the battery pack. The 4660 cells would allow a manufacturer to have a somewhat lower floor height in a finished car.

Those are interesting ideas, but as Electrive points out, the primary reason for those shorter cells is better control of production quality. The longer the cell, the more difficult it is to align all the components inside — the cathode, anode, and separator foil — accurately. In addition, protruding tabs in the cylindrical cells must be folded in, which requires specialized production equipment.

The extra length can also lead to difficulties in injecting the electrolyte that sits between those components correctly. A longer battery means that electrolytes can leak out when they are injected, which means the area between the can and the cap must be cleaned. Samsung SDI is planning to use etching laser technology for that purpose.

In May, Bloomberg reported that BMW is considering a switch to round cells for new electric car models instead of the prismatic cells it uses now. The round cells are to be manufactured by existing BMW suppliers and Samsung SDI is known to be one of those suppliers. BMW’s new round cells are said to exceed the energy density of Tesla’s cells by “at least a double digit percentage,” Electrive reports. At this moment, there is no official word on which manufacturers are interested in using the shorter 46-millimeter diameter cells.