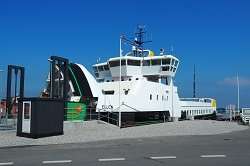 The Danish island of Aeroe, located in the Baltic Sea, is one of the few islands not connected to the mainland by a bridge. As a result, it is dependent on car ferries. Aeroe also has another distinction: it aims to become 100% carbon neutral by 2025. Although it has already made big strides towards achieving this goal via a comprehensive solar and wind powered infrastructure, its dependence on conventional car and passenger ferries sits as a significant roadblock.

To overcome this barrier, the EU-funded E-ferry (Prototype and full-scale demonstration of next generation 100 % electrically powered ferry for passengers and vehicles) project is designing, building and demonstrating a fully electric, zero-emissions vehicle and passenger ferry. The state-of-the-art ferry will be able to travel 22 nautical miles (equivalent to approximately 40 km) between charging, which is seven times longer than any currently operating electric ferry in the world.

To learn more, we sat down with Project Coordinator Trine Heinemann.

What is the project’s main objective?

The project aims to show that a green alternative can make economic sense for ferry fleets and provide an efficient service for passengers. Our prototype is very near completion and will soon be put into operation. Once finalised, I believe we will have created a fully electric ferry that not only supersedes existing electric ferries in terms of distance covered between charging and battery capacity, but also proposes alternative solutions to some of the challenges and barriers that have discouraged operators from taking the step towards electrification.

How is the E-ferry charged?

During daily operation, the ferry will only dock for the average 20-25 minutes it takes to load and unload cars, cargo and passengers. This means it is crucial that charging begin as soon as possible and continue until the very last moment before the ferry leaves.

The E-ferry charger can supply up to 4.4-megawatt (MWh) DC current to the vessel and is fully automated so that charging initiates as soon as the vessel is connected to its docking ramp. To accommodate the fact that the position of a vessel in the dock is always contingent on tides, weather conditions and the weight of its cargo, the project chose a charging solution that is placed on the ramp, rather than on the shore. As the ramp basically moves in the same manner as the vessel, this means the male plug on the ramp should always be able to connect with the female plug on the ship regardless of tidal, weather or loading conditions.

Can you tell us more about the battery?

The large capacity of the battery bank is required for the E-ferry to operate at a frequency of up to seven trips per day. Such ‘sizing up’ isn’t a problem for land-based battery installations, but for maritime use, it introduces a range of challenges that need to be addressed. For example, batteries are heavy, and the more capacity needed, the heavier they get. The batteries onboard the E-ferry weigh about 56 tonnes. As more weight is added, more energy is needed to operate the ship.

How did you address the issue of weight?

The E-ferry prototype is designed with both weight and energy savings in mind. For instance, the ferry’s hull and superstructure were designed to reduce resistance both above and below the waterline. The result is a long and relatively slender vessel with compact passenger and crew accommodations. Furthermore, lightweight materials have been used wherever possible, including an aluminium bridge and deck furniture made from recycled paper. Another key weight-saving measure can be found in the specially-designed electrical propulsion system, which is extremely compact and light, weighing only 750 kg for the largest propulsion engine.

We are also able to save significant weight by charging the ship’s electric system with DC current, rather than the AC/DC typically provided by an on-shore grid. However, battery systems that run on DC need to be converted between the on-shore grid and the batteries themselves, which requires the use of drives, converters, filters and controls – all of which are traditionally placed onboard a vessel. However, on the E-ferry the current is converted on-shore and the vessel is charged with DC. This means that the many large and heavy components required for the conversion can be placed on-shore instead of onboard the vessel, allowing for a significant savings in weight.

Batteries can be flammable. How did you address the fire risk?

We simply designed a battery system specifically for maritime use. It features a foam fire suppression system that will automatically inject an organic foam into a specific part of the battery when a thermal incident occurs in one of the vessel’s 840 batteries. The foam works not only to extinguish any potential fire in the affected battery, but also to cool down the surrounding batteries so the thermal incident does not spread.

What can we expect once the E-ferry takes to the water?

Once finalised, the E-ferry will represent a game-changing approach to medium-range ferry connections. First and foremost, the E-ferry is expected to reduce emissions by 2,000 tonnes of CO2, 41,500 kg of NOx and 1,350 kg of SO2 annually compared to a conventional ferry of the same capacity. It will also be quieter and have a smaller wake, thus further reducing its environmental impact while also improving the quality of life of those living around ports and not least the passengers and crew members on-board the ferry.