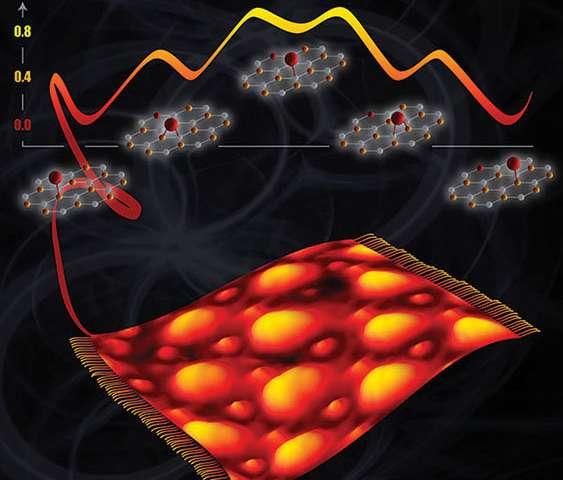 Fuels, plastics, and other products are made using catalysts, materials that drive chemical reactions. To design a better catalyst, scientists must get the right atoms in the right spot. Positioning the atoms can be difficult, but new research makes it easier.

Knowing where the atomic anchors are, the team can create patterns of catalytic atoms, designing what’s needed to get the job done.

Creating catalysts that make reactions faster and less wasteful means designing the catalysts from the bottom up.

Rather than search among countless possibilities, scientists want to design the right structures at a molecular level.

New fundamental research shows scientists how to take advantage of precise spots — where the oxygen atoms bind on graphene — to build model catalysts.

This research redefines what is known about oxygen binding, which is vital to creating hard-working catalysts.

The team began with a flat piece of ruthenium metal. On top of the metal, they grew graphene, which is a one-atom-thick layer of carbon.

In this structure, some carbon atoms bind to the metal, while others don’t.

By combining experimental and computational resources, the team examined these carbon atoms. They showed that single oxygen atoms, which act as ideal spots to attach catalytic sites, bind preferentially to carbon atoms that are close to the underlying metal but not bound to it.

Less preferred sites for oxygen binding are between two carbon atoms; carbon atoms that are, in turn, bound to ruthenium; and untethered carbon atoms far from the ruthenium.

This research redefines what scientists know about oxygen binding to carbon atoms on metal-supported graphene. The work is vital to designing efficient, selective catalysts.