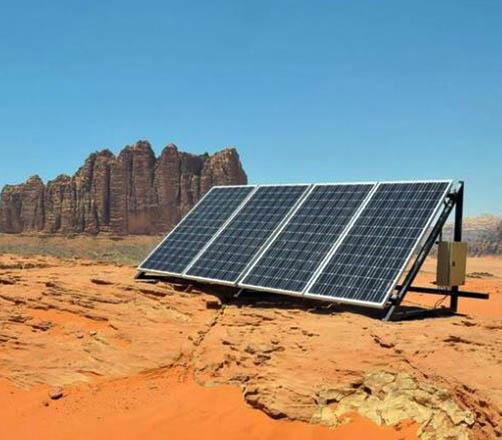 Renewable energy projects provided the Kingdom’s national power grid with 402 megawatts of electricity in 2017, which is expected to increase to 1,700 megawatts by 2019, Energy Minister Saleh Kharabsheh said on Wednesday.

In a statement following a visit to the Sahara Forest Project (SFP), Kharabsheh said that Jordan is rich in renewable energy resources, especially solar energy, due to the location of the Kingdom within the Sun Belt, the Jordan News Agency, Petra, reported.

SFP, which was launched in September of 2017 in Aqaba under the patronage of His Majesty King Abdullah and Crown Prince Haakon of Norway, aims at producing 10,000 litres of fresh water per day and up to 130,000 kilogrammes of vegetables annually, in addition to the production of solar power.

The 30-dunum SFP Launch Station, located outside the port city of Aqaba, is financed primarily by Norway and the EU, Petra reported.

Kharabsheh noted that the sun shines in the Kingdom for 316 days a year at a daily average of eight hours, adding that various areas in the country are also characterised by wind speeds ranging between 7 and 8.5 metres per second, which is enough to establish wind stations for generating electricity.

He also highlighted the importance of the SFP in enhancing the role of local resources in contributing to the total energy produced, commending the EU’s role in supporting the Kingdom’s energy sector.

During the tour —which saw the participation of EU Ambassador to Jordan Andrea Matteo Fontana, Norwegian Ambassador in Amman Tone Allers and ten other ambassadors — CEO of SFP Joakim Hauge pointed out that the project had already started producing solar energy and selling fresh vegetables to local consumers inside Aqaba.