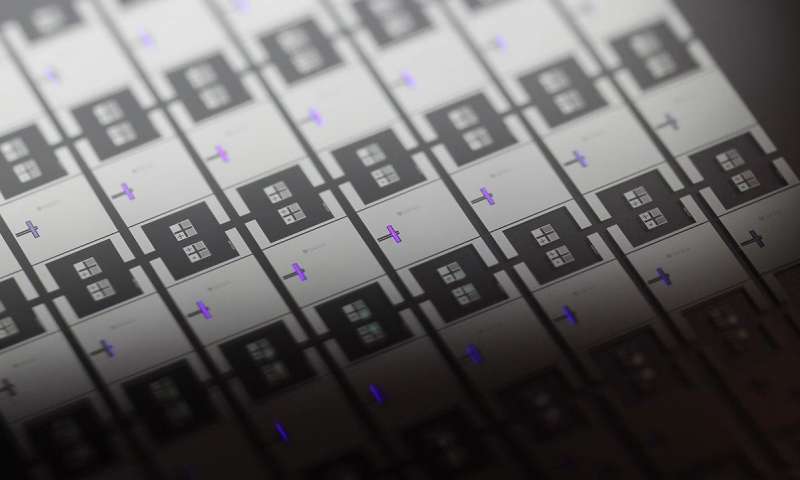 For the last decade, scientists have been making giant leaps in their ability to build and control systems based on the bizarre rules of quantum mechanics, which describe the behavior of particles at the subatomic scale.

But a challenge is getting delicate quantum systems to play well with mechanical ones—anything with moving parts—which underlie a great deal of existing technology.

In a first, scientists with the Institute for Molecular Engineering at the University of Chicago and Argonne National Laboratory have built a mechanical system—a tiny “echo chamber” for sound waves—that can be controlled at the quantum level, by connecting it to quantum circuits. Published Nov. 21 in Nature, the breakthrough could extend the reach of quantum technology to new quantum sensors, communication and memory.

“Getting these two technologies to talk to one another is a key first step for all kinds of quantum applications,” said lead study author Andrew Cleland, the John A. MacLean Sr. Professor for Molecular Engineering Innovation and Enterprise and a senior scientist at Argonne National Laboratory. “With this approach, we’ve achieved quantum control over a mechanical system at a level well beyond what’s been done before.”

In particular, Cleland said, there’s been much interest in integrating quantum and mechanical systems in order to make incredibly precise quantum sensors that could detect the tiniest of vibrations or interact with individual atoms.

“Many techniques for detecting things rely on sensing force and displacements—meaning motion,” he said. “These sensors play a fundamental role in any type of application where you’re trying to measure something. And mechanical systems are the easiest to build and the most sensitive, so there’s long been an interest in getting them to the quantum limit.” (Mechanical sensors, for example, are at the heart of the systems that detect gravity waves—the ripples in the fabric of space-time that allowed us to “see” black holes colliding across the universe.)

Cleland’s research focuses in part on quantum electrical circuits, and he wanted to hook up one of these circuits to a device that generates surface acoustic waves—tiny sound waves that run along the surface of a block of solid material, like ripples moving across the surface of a pond. This phenomenon plays a key role in everyday devices like cell phones, garage door openers and radio receivers.

A key breakthrough was building the two systems separately, on different kinds of material, and then connecting them together. This allowed the team to optimize each component and yet still communicate with one another. Both have to be kept very, very cold—just ten thousandths of a degree above absolute zero.

Scientists are excited because this gives them a platform to experiment with sound at the quantum level.

“This particular result opens the door to be able to do a lot of things with sound that you can already do with light,” Cleland said. “Sound moves 100,000 times slower than light, which gives you more time to do things. For instance, if you’re storing quantum information in a memory, it can last a lot longer stored in sound than in light.”

There are a number of fundamental unanswered questions about how sound waves behave in the quantum realm, he said, and this system could give scientists a platform to address them.

The technique also could point the way toward a quantum “translator” that would allow quantum communication across any distance. The electronic atoms Cleland’s group works with can only operate and communicate at very low temperatures; quantum acoustics could allow these circuits to convert quantum information to optical signals that could then be communicated over large distances at room temperature. It’s possible an acoustic-wave setup could form the basis for such a system, known as a quantum repeater, Cleland said.

A separate study in the same edition of Nature, led by Robert Schoelkopf at Yale University, also reports the creation of single-phonon excitations. Taken together, the two studies open a new avenue for storing quantum information, the authors said.