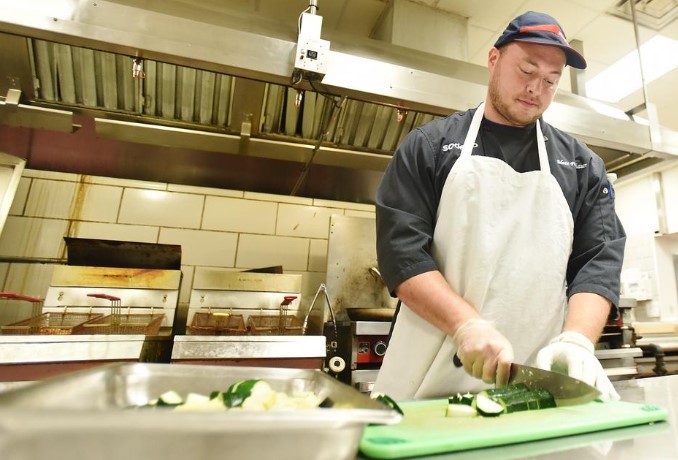 Of the roughly 169,000 tons of municipal solid waste that goes to a landfill in Ava annually, Bill Rabbia said about 13.7 percent of that is food scraps.

Food scraps are discarded leftovers or food no longer suitable for eating, said Rabbia, executive director of the Oneida-Herkimer Solid Waste Authority. This is food well past its sell-by date. The remains of a restaurant meal. The unused bits, such as peels or cores, from kitchen preparation.

Instead of disposing of it at the landfill, however, the authority is moving ahead on a new project to recycle those scraps into energy.

Construction is scheduled to begin next month on a 4,550-square-foot addition onto the authority’s Leland Avenue campus in North Utica. With hopes to open in early 2019, the authority is pitching the concept to restaurants, colleges, health facilities and other large food waste generators as a cost-effective, energy-conscious method.

The agency is offering a tipping fee of $20 less per ton of food scraps than the current $62 rate. Rabbia said the authority’s EcoDrop locations also will accept bagged food waste.

Billed at the Food2Energy project, the $3.4 million facility will have equipment that can separate the scraps from wrappers, packaging, utensils, etc. The food would then be turned into a “slurry,” Rabbia said, primed for Oneida County’s anaerobic digester adjacent to the solid waste authority.

“If you think of restaurant food waste, like Burger King or McDonald’s, there’s napkins in there, there could be plastic forks and knives — things like that. It’s very difficult to compost,” Rabbia said. “So that’s why we’re actually putting in this equipment to be able to now take that food waste and take those contaminants out and send it to the anaerobic digester.”

Eye on the future

In an oxygen-free setting, microorganisms break down biodegradable material and turn it into a gas — such as methane — that can be transformed into energy. That is anaerobic digestion.

The digester system at the Oneida County’s Water Pollution Control Plant is a new $27 million endeavor in itself, with completion expected by October as part of a $330 million project to upgrade the county’s sewer infrastructure.

Like the digester, the authority similarly captures methane gas for energy at its Ava landfill. The difference is the digester, an enclosed facility, projects to collect gas more effectively.

Rabbia cited the county’s digester system as a key reason for the Food2Energy project.

“With Oneida County making the decision to go forward with their upgrades, that’s when we said this could be an opportunity for us since the majority of the waste in the two counties comes through (the solid waste authority),” he said.

Another factor was a state mandate proposed by the governor during last year’s budget process. The mandate would have required large generators of excess food or scraps to separate their food waste for donation (if suitable) or recycling. The measure would have only applied to generators within 40 miles of a suitable food waste recycling facility.

Similar mandates are in place in New York City as well as Connecticut, Maine, Rhode Island and Vermont. Gov. Andrew Cuomo’s proposal, targeting entities that generate “an annual average of two tons per week or more of excess food and food scraps,” did not gain enough traction.

“We’re not proposing a local mandate, but we’re basically keeping our eye on mandates out there, and we want to make sure that generators in our region would have an opportunity to cost effectively manage it properly if the mandates pass,” Rabbia said. “Our project, we believe, stands on its own. Whether the mandates pass or not, we’re building this and it’s going to be a good thing for the region and the environment.”

‘A win-win for everything’

The food scraps facility is not intended to replace any ongoing food recycling or donation efforts, Rabbia said.

He referenced the Environmental Protection Agency’s Food Recovery Hierarchy, a diagram that outlines best practices for handling food waste. The hierarchy’s most preferred option is reducing the volume of surplus food. The least is landfill/incineration.

Repurposing food scraps for energy ranks fourth of the six tiers, above composting.

“It’s important to state that we do not want to take any edible food from charities or from farm feed,” Rabbia said. “That’s Priority One is if it’s edible and it can go to humans for feed or animals for feed. … If you can deal with the waste at the source and compost it in your backyard, we don’t want you to stop doing that.”

From food donations to composting on its Rome campus, Mohawk Valley Community College has its own food recycling programs, said Brett LaSalle, the college’s assistant director of facilities and operations.

With that in mind, LaSalle said he sees promise in the Food2Energy project.

The solid waste authority has pitched the idea to MVCC. LaSalle, who chairs MVCC’s Sustainability Council, said he believes implementation would involve a “learning curve” in training cafeteria staff — contracted through Sodexo — and students to separate food waste from other garbage.

“I think it’s a win-win for everything,” LaSalle said. “I think it’s going to make sense not just for MVCC, but colleges or schools throughout the (area). I think it’s a good thing and hopefully it’s a successful program.”