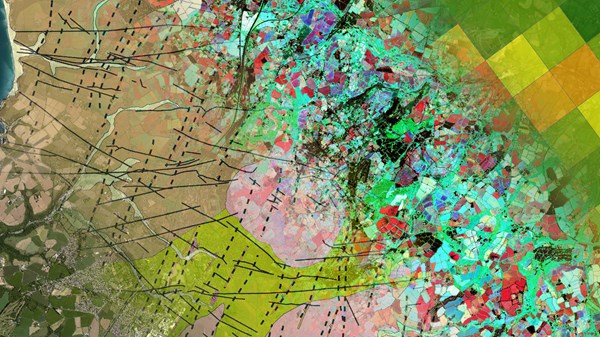 Global demand for lithium, a vital component in “next generation” batteries for electric vehicles and storage for renewable power, is expected to grow by around 400% by 2025.

Lithium in hot brine springs in Cornwall could provide the UK with a domestic source of the metal, which has been described as “the new gasoline” due to its potential to help in the shift to low-carbon energy supplies.

Now a study has shown that satellites can detect changes in vegetation and surface minerals, which, when combined with geological data, could indicate potential locations of lithium in the county once famous for its tin mines.

This kind of remote sensing could significantly cut the cost of lithium exploration and also reduce the environmental impact of mining by better targeting prospective sites, the team behind the research said.

The study of two areas of Cornwall combined different types of remote sensing techniques to better predict areas that may contain brine pools with lithium in them below the surface and identify target sites for further work.

Dr Cristian Rossi, Satellite Applications Catapult
Along with other measures such as heat mapping and geological faults, the team looked for potential indicators of lithium in vegetation cover; for example, how healthy plants are, to help indicate where hotspots of lithium might be.

Prospectors could then drill down into the ground to pump out the hot, salty water which contains lithium and extract the metal rather than needing large-scale open-cast mines.

The team have also used the same range of satellite data to create an map showing where important habitats, flood risk areas and towns are situated to help with environmental monitoring of future mining.

Dr Cristian Rossi, principal Earth observation specialist, Satellite Applications Catapult, who led the study, said: “We are very excited by the findings of this project.

“This approach to lithium exploration, which includes the estimation of multiple surface indicators, has not been attempted before and may be highly applicable across the wider mining industry.

“We have shown that by combining a range of satellite data and expertise in UK mining, geology and Earth Observation, we can accurately map the environmental baseline and also delineate areas where lithium is more likely to be present at depth.

“These are the first digital maps that display potential lithium hotspots for initial investigation and validation.”

Jeremy Wrathall, founder and chief executive of project partner Cornish Lithium, said: “The results of the study, and our collaboration with other project partners, has enabled our company to significantly advance our exploration programme and to better prioritise areas on which to focus our exploration for lithium-bearing brines in Cornwall.”

The team was led by the Satellite Applications Catapult, established to transform the UK’s capability for innovation in the technology and drive growth, and received £850,000 from Innovate UK.