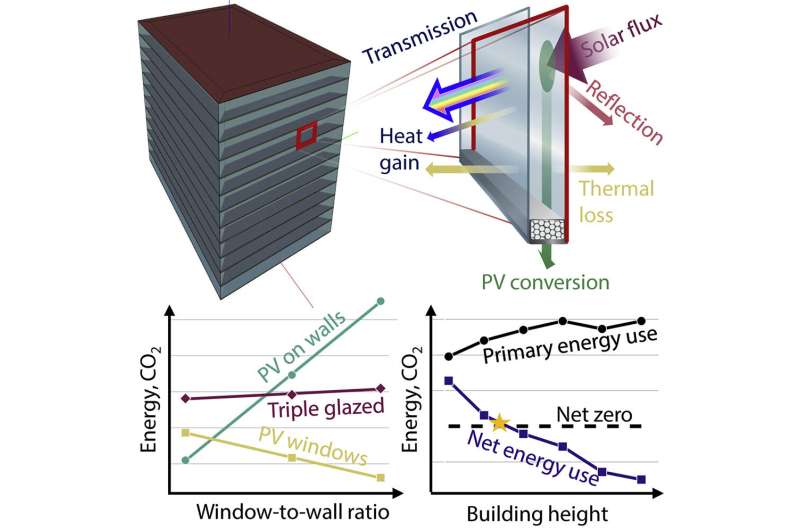 Skyscrapers dominate city skylines, but these massive glass-walled structures can be made more energy efficient through the addition of thermally efficient photovoltaic (PV) windows, according to an analysis by researchers at the National Renewable Energy Laboratory (NREL).

Their findings, published in the journal One Earth, outline building design rules that can yield a structure with net-zero or even net-positive energy consumption.

“There are preconceived notions of what an energy-efficient building looks like, and it usually is not highly glazed, and it probably isn’t very tall,” said Lance Wheeler, a scientist at NREL who specializes in integrating PV technology into windows. “We found that there are other ways to build high-efficiency buildings.”

Wheeler is co-author of the new paper, “Photovoltaic windows cut energy use and CO2 emissions by 40% in highly glazed buildings,” which he wrote with his twin brother, Vincent, an assistant professor at the University of Wisconsin–Stout. To conduct the analysis, the brothers developed a software called PVwindow that allows users to model the design of PV windows for building simulations.

The other co-authors, all from NREL, are Janghyun Kim, Tom Daligault, Bryan Rosales, Chaiwat Engtrakul, and Robert Tenent.

Buildings account for more than a third of the world’s energy consumption and almost as much of global carbon dioxide emissions. But by combining PV with high thermal performance window technologies, new buildings can become a critical tool in combatting climate change, the researchers noted.

Modern office buildings stand out for their looming glass facades, a counterpoint to the days when they were constructed of concrete and single-pane windows. The Equitable Building in New York, for example, has a window-to-wall ratio of 25%. By comparison, the city’s Bank of America Tower opened in 2016, 101 years later, with a ratio of 71%.

The researchers considered buildings with a window-to-wall ratio of 95%—dubbed “highly glazed”—for most of their analysis to clearly illustrate the impact glazing has on building energy performance. Improvements in glazing technologies such as triple-pane windows helped improve the energy efficiency of buildings but so far have not been widely adopted.

With so many windows and sunlight streaming through, highly glazed buildings must expend considerable energy to cool the occupants. Photovoltaic (PV) windows provide thermal insulation for a building and use the absorbed energy to generate electricity. Over the course of a year, the researchers found a clear trend in PV generations in climates with weather that changes strongly with the season.

The simulations revealed that in Denver, for example, on-site PV generation can cut in half the day-averaged building electricity load for a heavily glazed 12-story structure. They also determined PV windows in Denver could eliminate 2 million kilograms of carbon dioxide emissions annually.

The simulations showed a step-like increase in performance for each of the three different versions of PV glazing studied and demonstrated reduced energy consumption and carbon dioxide emissions in the eight climate zones.

The researchers found energy use climbs when a building has more windows than wall space. However, the energy use drops when the ratio is increased and includes PV glazing. Indeed, larger floor-to-floor height coupled with PV glazing reduces building energy use. Couple the PV glazing with photovoltaic panels on the outside of the building—particularly facing east and west to capture early morning and late-day sun—and this skyscraper can reach net zero.

“Picture a skyline in, like, New York City where there are these high-rise buildings that are entirely glass,” Wheeler said. “They’re fully glazed. The Freedom Tower has millions of square feet of glass. It could be a power plant in itself.”

PV glazing could be paired with rooftop solar to increase the amount of electricity generated, with the potential to create more power than a building needs by using high-efficiency PV windows and unique building geometry, the researchers noted. The transition could address climate changing goals without sacrificing the architectural freedom of highly glazed facades.