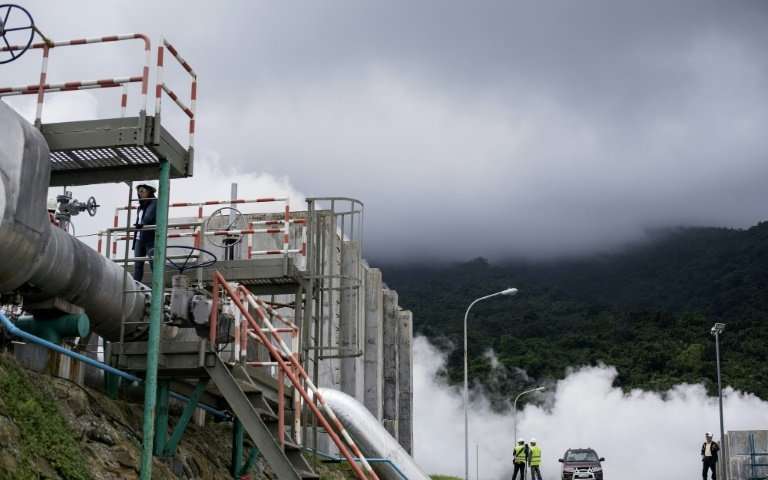 Deep below the ancient volcanoes scattered around the Philippines sits a simmering stockpile of intense heat that officials hope will help revive the nation’s sputtering green energy machine.

The Philippines—thanks to its spot in the Ring of Fire zone of Pacific volcanoes—has long been one of the world’s top producers of geothermal power, but years of neglect have sent the industry sliding.

Now a surge of new exploration efforts are underway in a nation that has some of the world’s largest untapped sources of volcanic heat, but which relies on coal for half its electricity.

“It’s an exciting development,” Enrique Nunez, the country director for Conservation International, told AFP. “In an environment where coal is king, this is good stuff”.

One of the nation’s freshly upgraded plants, Maibarara, puffs out white steam from shining metal stacks on a jungle-covered hillside about an hour south of Manila.

High-temperature water vapour from the Earth’s red-hot underbelly is piped to the surface where it makes power-producing turbines spin.

“There is no smoke,” said facility manager Paul Elmer Morala. “Only a bit of noise, but our neighbours don’t complain.”

The Philippines was for years the world’s number two, behind the United States, in drilling deep to tap the scorching hot steam.

But as the nation’s economy has boomed in recent decades, it has opted to feed its needs with cheaper and quicker-to-develop plants that burn fossil fuels.

The amount of its power from geothermal sources has stayed relatively constant since 2002, while coal and gas-powered production has nearly tripled.

Early in 2018 the Philippines lost its number two geothermal status, which it had held for over two decades, when Indonesia finished its massive Sarulla project.

That demotion was years in the making for a country which had an initial rush of geothermal exploration in the 1970s and 1980s in response to the world’s first global oil crisis.

Decades of neglect followed until a growing global commitment to slow climate change led to the Philippines passing a law a decade ago to spur renewable energy investments.

“Of course the target is to increase the existing capacity,” Ariel Fronda, head of the renewables division of the Philippine energy ministry told AFP.

“There is a high degree of interest in renewables in general… Energy has suddenly become an attractive business,” he added.

The Philippines’ seven geothermal fields now supply about 12 percent of the nation’s energy, with a long-term plan to nearly double capacity by 2040.

The Philippines has the fifth-largest geothermal reserves, behind only the United States, Indonesia, Japan and Kenya.

Though nominally free, finding the resource is an expensive enterprise, with exploration wells costing up to $8 million each with no guarantee of success.

“Geothermal is that risky,” said Fronda, with the government requiring at least two wells per private exploration project in order to more accurately estimate the yield of a site.

The effort to stoke up the nation’s geothermal engine largely pre-dates the arrival of President Rodrigo Duterte.

However, last year he created an energy investment council that can greenlight major new projects in 30 days. A geothermal exploration effort is among the four initiatives it has approved.

Though the Philippines has tumbled, it still can be an important player in geothermal, said David Livingston, a renewable energy expert with the US-based Atlantic Council think-tank.

“The Philippines can serve as a catalyst for other developing nations’ interest in geothermal, particularly if its newest… programmes prove successful,” he added.