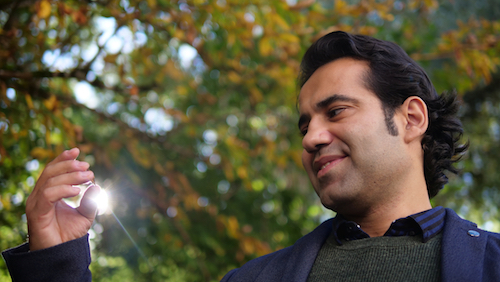 Solar cells made from perovskites with their record-breaking power conversion efficiencies (PCEs) of more than 23% could be ideal for generating sustainable solar energy if they weren’t thermally unstable. A new technique to replace one of the least stable components in these cells could change this. The feat is a real advance towards commercialization.

Perovskites have an ABX3 structure, where A is caesium and methylammonium (MA) or formamidinium (FA), B is lead or tin and X is chlorine, bromine or iodine. They are one of the most promising thin-film solar-cell materials around today because they can absorb light over a broad range of solar spectrum wavelengths thanks to their tuneable bandgaps. Charge carriers (electrons and holes) can also diffuse through them quickly and over long lengths. All these excellent properties have allowed the solar cell efficiencies of these materials to skyrocket from an initial 3.8% (in 2009) to nearly 23% now. This makes their performance comparable to that of established technologies such as silicon, GaAs and CdTe.

The most efficient perovskite solar cells contain bromide and MA, which unfortunately is thermally unstable. To overcome this problem, researchers replace MA with FA since it is not only more thermally stable than MA but it also has an optimal redshifted bandgap. Unfortunately, because of its large size, FA does distort the perovskite lattice and produces a photoinactive “yellow” phase at room temperature. The other photoactive “black phase” can only be seen at high temperatures.

Researchers led by Michael Saliba of the Adolphe Merkle Institute in Fribourg and Anders Hagfeldt of the Ecole Polytechnique Fédérale de Lausanne have now found a way to stabilize the black phase of FA at room temperature. They did this by replacing the bromine with iodine and the MA with a combination of rubidium and caesium. The resulting cells, which are reported in Science 10.1126/science.aat3583, have a PCE of 20.35%, which is one of the best-reported efficiencies yet for a non-MA perovskite solar cell.

Compatible with a planar architecture

“As well as being thermally stable, the new material is also compatible with a planar architecture, which means that flexible solar cells are an exciting possibility,” Saliba tells Physics World.

Replacing the organic MA with the inorganic FA was only one step, he adds. “Previous attempts to stabilize the photoactive black phase of FA came at the cost of a blue-shifted bandgap, which absorbs less light and thus reduces device performance. We succeeded in removing Br and still achieved a phase-stable perovskite with a smaller bandgap that can collect more light and therefore produce more electricity.”

As well as solar cells, perovskites also show great promise for other optoelectronics devices such as light-emitting diodes that could be used in applications like flat penal displays and solid-state lighting. These devices can be made using simple solution-processing techniques and their colours can be tuned.

However, the problem is that the highest reported external quantum efficiency, or EQE (which is the number of photons produced per electron consumed) of green and red-light emitting perovskites is around 14 and 12%, respectively. These values lag behind those of organic LEDs and inorganic quantum dot LEDs. A team of researchers in China, Singapore and Canada may now have solved this problem too by making LEDs from halide perovskites that have an EQE of over 20%.

The researchers achieved this using a new strategy that they have dubbed compositional distribution management. “We fabricated high quality perovskite films by spin-coating a special precursor of CsPbBr3with an MABr additive,” explains team leader Zhanhua Wei of Huaqiao University in Xiamen. “During the spin coating process, the two compounds crystallize at different times because of their very different solubilities in the precursor solvent and eventually form a quasi-core/shell structure of a new composite material, CsPbBr3/MABr.”

The MABr shell not only passivates the non-radiative defects that would otherwise be present in the CsPbBr3 crystals, so boosting the photoluminescence quantum efficiency, but it also balances charge carrier (electron and hole) injection into the material, he says. Such balanced charge injection is important in LEDs because when electrons meet holes in these devices they can release energy in the form of photons in a radiative recombination process.

Wei and colleagues, who report their work in Nature 10.1038/s41586-018-0575-3, say that they are now busy working on improving the operational lifetimes of their devices, which are only around 100 hours at present. “This is obviously not long enough for practical applications, so we need to extend this to over 10 000 hours or even 100 000 hours,” he tells Physics World.