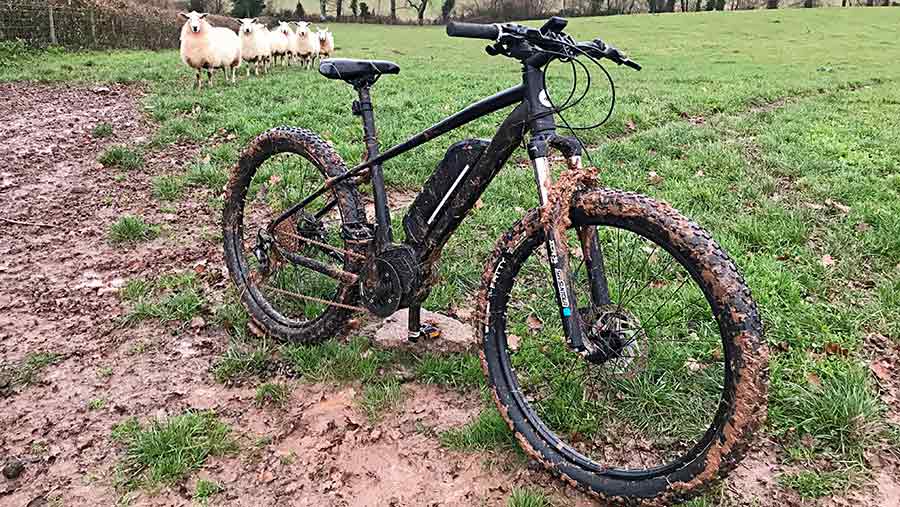 A mountain bike might be an odd sight in the pages of Farmers Weekly, but the machine we are about to feature already boasts a couple of agricultural customers.

The appeal for the farmers in question is apparently the fact that the electric motor housed in the bike’s frame allows them to get around the stock quietly and cheaply, while throwing a bit of exercise in for good measure.

That’s because – unlike an electric motorbike, which does all the work for you – an e-bike requires the rider to do at least some pedalling, even if it’s a token gesture when the motor is cranked up to its highest setting.

Initially we were doubtful about an e-bike’s place on a farm. After all, you are not going to be hauling many bags of feed around with it and we certainly wouldn’t advise lashing a slug pelleter to the rear.

But with farmers spending more and more sedentary hours perched on a seat, replacing a few of the quad bike or Mule trips with a slog on the e-bike can only be good news for the ticker.

It also gives those physically unable to ride a conventional bike the ability to have a go.

All this sounds appealing, but to find out what they are really like to live with we got hold of the latest Italian-built MBM Metis – imported by UK firm Powabyke – and put it to the test.

This relatively simple e-bike has an 80Nm Olieds electric motor with five settings, ranging from 50% to 400% assistance.

How does it work?

Other than the fact it has an electric motor slotted between the cranks and a battery bolted on to the down tube, the Metis is nearly identical to a conventional mountain bike.

That means it has 10 conventional derailleur-shifted gears, hydraulic disc brakes and front suspension to take out the worst of the bumps. As a result, when the motor is turned off it works like a normal bike, albeit a heavy one.

Pressing a button on the handlebars sparks the thing into life and there’s an LCD screen showing all the important information, such as which assistance setting it’s on and how much battery life is left.

Sitting next to the on/off switch, there are also up and down arrows for adjusting the assistance level. Selecting level one adds 50% to the rider’s input, with incremental increases up to a massive 400% on level five.

To get it to work, the rider just starts pedalling and the motor kicks in immediately.

At the lower end of the power spectrum, the effort that the bike puts in is relatively hard to notice.

However, once you get up to level three (200% boost) it’s clear that the bike is giving you some serious help. The rider still needs to put in the effort in order to make decent progress, though – and the more they put in, the faster it goes.

Flick it all the way up to level five and it’s almost as though you’re a passenger on a mini electric moped. On moderate terrain, simply turning the pedals will get the rider up to decent speeds without any physical effort.

Even steep climbs require little work as we found when we did a 1,227ft ascent over five miles and didn’t break a sweat.

However, we did need to work the gears to get the most out of it. Go too high and the motor will bog down; too low and it won’t achieve its maximum speed.

How fast can it go?

EU law stipulates that all electrically assisted bicycles are limited to 25kph (15.5mph), so when we cranked the Metis up to full power, the motor duly kicked out at that speed.

It’s a little frustrating as this seems fairly sedate on the road, and even if the rider puts in considerable effort, it’s hard to push far beyond that.

However, it is possible – if not legal – to unleash some more performance. The best option for doing this is to purchase a chip online that removes the speed limiter and keeps the motor spinning as fast as the rider can pedal. They cost about £100 and don’t alter anything else on the bike.

The other cheat to get the bike to go faster is to trick the speedometer. Normally this works using a sensor on the chain stay and a magnet on the wheel. But by transferring the magnet to the crank, the computer is fooled into thinking the bike is going much slower than it really is.

With this modification, we managed to get the bike up to 30mph, which was more than fast enough. There are no rules preventing these chipped e-bikes being used off-road, but sadly it’s illegal to use them on the road or on designated cycle paths.

If someone does want to use a chipped bike legally on the road, it effectively has to be registered as a motorcycle and is then subject to the same rules and regulations. The other option is to switch off or remove the chip for on-road use.

Does it have a place on a farm?

An e-bike obviously isn’t going to do any serious work on a farm, but it is a pleasant way of getting around the place and the exercise is a bonus.

It could also be useful when ferrying machinery back and forth when there isn’t a spare person available to run you around.

On rough ground, we found the lack of rear suspension made for an uncomfortable ride, so we would probably spend a little more and get a full-suspension version.

Apparently, Powabyke is looking at bringing one in and most mountain bike brands offer something similar, so there are plenty to choose from.

The other limitation is the maximum gradient it’s able to ascend. If a slope is too steep for a fit person to ride a normal bike up, then it’s fair to say the Metis will struggle, too. When we pointed it up a particularly steep grassy hillside, the motor just stopped turning and we had to abort.

Soggy, cultivated ground also causes the tyres to clog up and stop turning.

How long does the battery last?

Battery life varies considerably depending on the terrain, assistance level selected, weight of the rider and the ambient air temperature. Motor manufacturer Olieds quotes a range of up to 50km, but that will be in ideal conditions and at the lowest power setting.

For general riding around the farm we found it used very little power and would easily last a day. However, when we did our 1,227ft climb and pushed it as hard as we could, we managed to drain half the battery life.

When the battery does go, you’re back to pedalling a conventional bike and a rather lead-like one at that. Therefore, it’s worth keeping an eye on the battery gauge. Recharging takes about five hours, so a moderate user could probably get away with charging it once a day.

Do you need a licence?

Anyone over the age of 14 can ride an e-bike on the road without a licence and they won’t need to pay any tax.

However, those who want to ride a chipped e-bike (one that goes faster than 25kph or has a power output of more than 250W) on the road officially will need to get it approved by the DVLA and it will effectively be classed as a motorcycle.

Standard motor vehicle rules will then apply, making it a fairly unattractive proposition.

What about taking it to the pub?

The general advice is to not mix drinking and e-biking, but as an e-bike comes under the same legal rules as a bike there is technically no legal limit for how much alcohol it’s permissible for a cyclist to drink.

Being caught doesn’t affect your driving licence, though, as these aren’t classed as motoring offences.