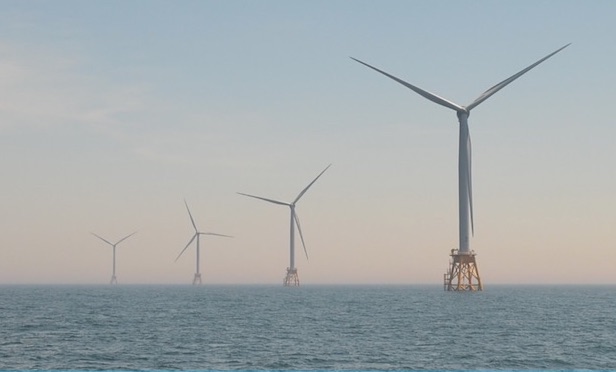 For an alternative to power from coal and deep water fracking, E2 (short for Environmental Entrepreneurs) published a report urging development of offshore wind energy. It commissioned BW Research, a consulting group which focuses on economics and the environment, to complete an analysis of five Atlantic Coast states.
The report titled “Offshore Wind: Generating Economic Benefits on the East Coast” found if NY, NJ, VA, NC and SC each added an average-sized offshore wind energy farm with 44 turbines and the capacity to produce 352 megawatts of electrical power, this would create 25,000 construction and operational jobs on the East Coast. (One megawatt is a million watts of energy.)

It notes the Department of Interior is currently creating lease sales for 28 upcoming offshore wind farms. The report states if developed these enterprises would create tens of thousands of additional jobs, potentially adding $3.6 billion to the economies in the five states, and providing generous state and federal tax revenue.
The report concludes that one wind farm in New York would create 4,000 jobs and add $730 million to the economy. For every $1 spent on construction, offshore wind is projected to generate $1.72 for New York’s economy. Over $100 million in state, local and federal taxes would result from the construction of the turbine farm.

The report also asserts it is economically safer than drilling for gas and oil. With an oil spill, just one month of closing the beach and fishing would cost NY $1.8 billion in its gross domestic product and $870 million in lost wages, according to BW Research.

Earlier this summer New York Gov. Andrew Cuomo announced a plan for a goal of 2,400 megawatts of new offshore wind to be generated by 2030. This would be enough to power 1.2 million New York households, according to the governor’s office. The first phase of includes the state’s obtaining approximately 800 megawatts of offshore wind by 2019. In July, he wrote a letter to the secretary of the Department of the Interior, Ryan Zinke, to lease four new wind energy areas recommended in the NY plan. In the past, Zinke has supported developing offshore wind farms in NY.

The E2 report also projects a wind farm of the average-sized capacity of 352 megawatts in NJ would create 4,313 jobs. The report notes it would also pay $278.9 million in wages and add $702 million to the Garden State’s economy.

But the wind farms may run up against President Donald Trump’s agenda. He has announced plans to expand offshore oil drilling in the Atlantic Ocean.

Fishermen have also opposed offshore wind farms as threatening their livelihood. The $2.6 billion Cape Wind project in the Nantucket and Martha’s Vineyard area was scuttled by local opposition including the fishing community. Residents including some high-profile names like the Kennedys and the Koch brothers opposed the project, expressing environmental and aesthetic objections.

According to a National Fisherman article, on April 9 the National Coalition for Fishing Communities wrote to MA governor Charles D. Baker. They requested limiting wind farm plans for south of Martha’s Vineyard currently being considered to 400 megawatts and for the inclusion of fishing interests in future offshore energy developments.