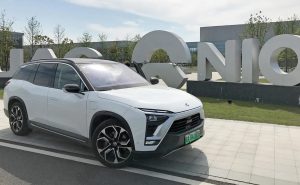 NIO’s preparations for geographical expansion are progressing in Europe, where soon the first battery swap stations will be deployed in several new countries.

The modular station has been sent for installation in Germany (one of the first new markets), but before the end of this yea,r we will see battery swap stations also in the Netherlands, Sweden and Denmark. Norway already has a few of them (supplied from China).

The infrastructure rollout is related to the upcoming launch of the NIO ET7, which is the company’s flagship premium sedan.

Here is a short demonstration of NIO’s second-generation Power Swap Station 2.0, introduced in April 2021, in Hungary:

This system has a total of 14 battery slots – 13 battery packs (vs 5 in the 1.0 version) and an empty slot to pick up a discharged battery (or old/previous generation battery when upgrading). According to NIO, they are capable of completing up to 312 battery swaps per day (24 hours), which would mean 4.6 minutes or close to 277 seconds per swap (including the automated parking.

Having such infrastructure, and compatible electric cars (currently only NIO models), long-distance travel should be possible at a similar speed as in the case of internal combustion engine cars, which has been recently demonstrated in Bjørn Nyland’s 1,000 km challenge. On the other hand, there is no definite answer whether as to if it will be a viable (more cost-effective) solution, compared to fast charging.

NIO plans to install over 4,000 battery swap stations by the end of 2025, including 1,000 or so outside of China. This week, the company reached 1,100 stations installed in its home market.

According to the press release, NIO intends to further increase its investments in Hungary and build an operation center to implement our strategies in the European markets.

“NIO Power Europe Plant has a total area of approximately 10,000 square meters. As NIO’s first factory overseas, it serves as the center of manufacturing, service and R&D for NIO’s power products and services in Europe. With the factory put into operation, NIO will further improve its power network and service efficiency, as well as user experience in Europe.”