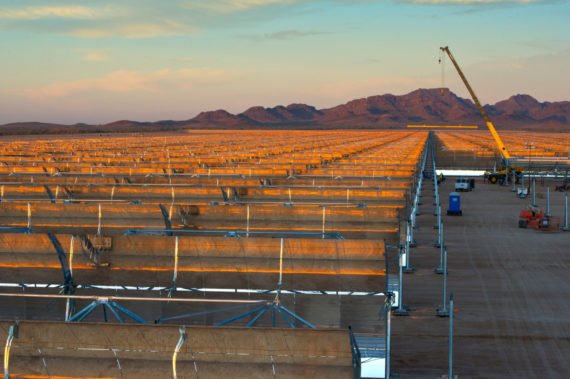 Almost everyone is in favor of solar energy, but not everyone wants to live across the street from a solar power plant. Invenergy, a renewable power developer based in Chicago, has installed more than 100 solar farms in various locations around the nation, but it ran into a new variation on the “not in my backyard” theme at a public hearing in Pueblo County, Colorado, recently.

Television station KRDO in Colorado Springs reports that a group of 12 residents living across the road from the proposed solar installation attended a county commissioners’ meeting recently to object to the proposal. The speakers, all homeowners in the St. Charles River Estates neighborhood, told the commissioners having so many solar panels so close to their homes poses a risk of fire.

“There are numerous concerns but the biggest concern is the fire danger,” Rocky Mangini told the commissioners. “The only thing separating this facility from us is a 60 foot right of way road. Burnt Mill Road.” If the panels caused a grass fire, the closest fire fighters are 30 t0 40 minutes away, he said. By the time the fire trucks responded, all the homes in St. Charles River Estates would be nothing more than smoldering embers, he suggested.

Mangini didn’t say specifically how that might happen. If you have information about solar panels sparking grass fires, please send it our way and we will be sure to pass that information along to the commissioners for their consideration. Mangini also failed to address what resources the community has to fight any fires in the neighborhood except with garden hoses. Presumably a backyard grille or fire pit might constitute an existential hazard to the community, as well as little boys playing with matches in the school yard.

If the community truly has no firefighting ability, there is some question about what it is doing out in the middle of the prairie like that and how the residents obtain fire insurance policies so banks will give them mortgages. In other words, the residents have every right to be concerned about fires, but their focus on grass fires from overheated solar panels is the least of their concerns.

Ben Turner, who represented the company at the meeting, told the commissioners, “It’s going to provide property taxes to the county. This project will provide property taxes without increasing the tax base on any of the local constituents. These are grassy areas, they catch on fire for other reasons, so fire is always going to be a concern, but these [solar farms] historically have been low risk for fire concern.”

“Harumph,” was Mangini’s reply, or words to that effect. He told the commissioners he and his neighbors are all for clean energy, but “We need to have some forethought, and some common sense to make sure they don’t place these facilities where they will impact residential properties,” he said. Translation — we’re for it as long as it’s located somewhere other than across the road from us.

NIMBY is not new. It affects everything from halfway houses for convicts to where recycling facilities should be located. Invenergy surely must have encountered similar objections in other communities. Perhaps it should rethink how it gets local residents on board with renewable energy projects. Maybe if it offered to create a microgrid that could power the community in the event of a grid failure, that would help people welcome this project rather than oppose it.

Nobody ever wants anything new in their neighborhood unless there’s something in it for them. Renewable energy companies have lots of super smart engineers to design their systems. Maybe they need more social engineers to help them sell their ideas successfully to local residents so the renewable energy revolution can move forward as quickly as possible.