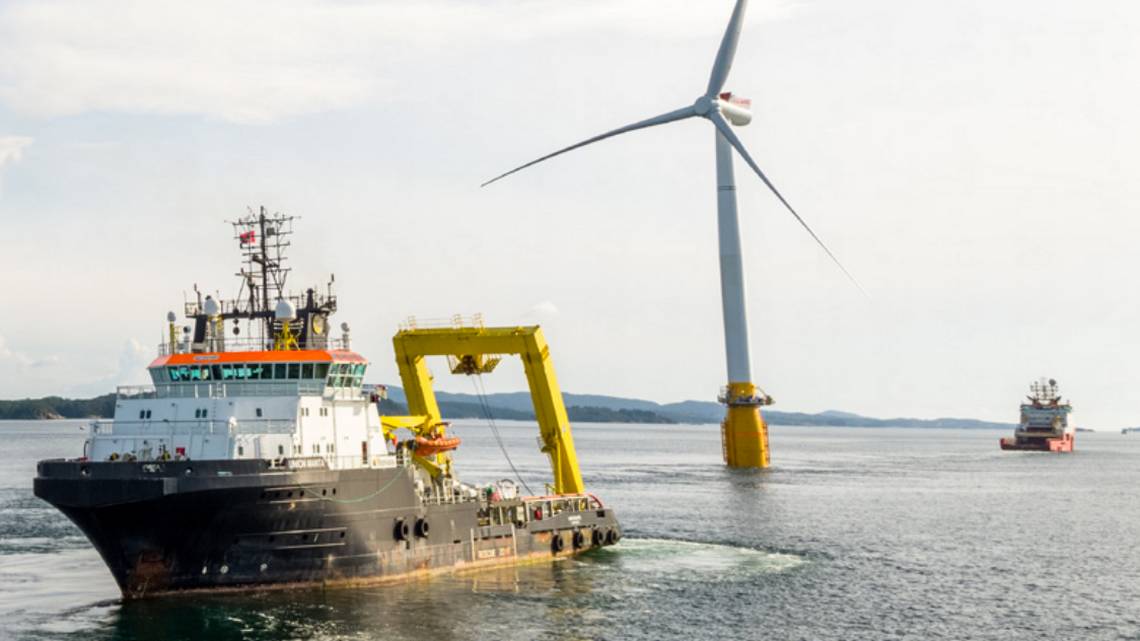 Efforts to build fields of floating wind turbines off the coast of California are gaining momentum, and Morro Bay might be at the front of the line.

Despite a lack of publicity, activity on the West Coast has been moving along — ”quite a bit of it,” according to Morro Bay city administrator Eric Endersby.

Endersby has been working to help Seattle-based Trident Winds find a home in Morro Bay for a multimillion dollar project that would tie into the grid in the city where the mothballed Dynegy power plant has sat idle since 2014.

Wind energy proposals present an attractive option in a state that’s aggressively pursuing clean energy solutions. Just this week, the state Assembly approved a bill that would mandate California generate 100 percent of its energy from renewable sources by 2045.

The sticking point for wind energy in the Pacific Ocean has been a U.S. Navy map that shows virtually all of the California coast in a red zone, meaning those sectors were “not compatible” with military operations and “off limits” to ocean wind farms.

The map appeared to jeopardize plans by Trident and other companies to build up to a 1,000 megawatts of offshore wind power generated by giant 700-foot floating wind turbines out of view some 30 miles off the Cambria coast.

But there are signs of progress on the horizon: Trident is continuing to work with local stakeholders, the Department of Defense has been willing to listen to proposals lately, and a state and federal task force is planning its first meeting in a year later this month.

Locally, Endersby said Trident has been meeting with the fishing community and appears to have an agreement in principle that would allow the turbines to be placed at a site away from the most important fishing areas.

In addition, he said that Morro Bay is eager to secure the economic development benefits, and Trident wants to sign a memorandum of understanding “sometime in September or October” that would help the company in the bidding process and demonstrate local backing for its application once the process moves forward.

Norwegian energy giant Statoil also has also expressed interest and is thought to be ready to put up a competitive bid. It has spent little time in Morro Bay meeting with locals, however.

Trident Winds CEO Ella Weinstein said that Trident’s record of local cooperation and consultation should matter, adding she hopes “that the voice of the stakeholders will be given equal value to the value of money in selecting the winner of the auction.”

But what if the DOD says “no” after all?

“Either way, we think Trident will move forward relocating out of DOD jurisdiction into the National Marine Sanctuary area off Monterey Bay if needed. Trident has held some discussions with them that seem favorable,” Endersby said.

Another player who declined to be identified wants to build a small pilot project to connect to the Central Coast, figuring this would be substantially easier, quicker and more certain than a mega-project that could be stalled in any manner of ways.

‘Art of the possible’

The Department of Defense gatekeeper for any renewable energy project off the coast is Steve Chun, community plans and liaison officer for the Navy’s Southwest Region, based in San Diego.

In a recent interview, Chun said interest in developing wind energy off the West Coast has been brisk lately. There “have been meetings with wind development interests on an active basis” in the past few months including two groups recently, he said.

”We have now received proposals to build wind farms at 14 different offshore sites to date,” he added.

Instead of a giving a flat “no,” Chun said that “the Department of Defense is trying to see just what the art of the possible is.”

Also behind the scenes, California — represented by the California Energy Commission and the federal Bureau of Ocean Management (BOEM) — have been waiting for Department of Defense to work out its policy.

Now, for the first time in a year, the BOEM/California Intergovernmental Renewable Energy Task Force plans to hold a public meeting in Sacramento on Sept. 17, spokesman Scott Flint confirmed.

Chun, Gov. Jerry Brown’s energy commission officials and BOEM staff will be meeting along with industry players, a number of them with international ties.

The Department of Defense has found ways to live with offshore wind along the Atlantic Coast, where turbines are generating 25,464 megawatts of electricity across 13 states, including the 30-megawatt Block Island Wind Farm off Rhode Island that was commissioned in 2016, according to the Department of Energy.

But progress has been slower along the West Coast.

Unlike in the Atlantic, where wind turbines can anchor to the seabed, the best wind area here is in federal waters that stretch from 3 to 200 miles out, at depths of several thousand feet.

That requires floating wind technology, which has been getting real-world testing off the coast of Europe, where a handful of companies are now generating power. To date, Europe is home to more than 4,000 offshore wind turbines, and a surge in new, larger offshore installations in 2017 shows industry’s potential for expansion.

Now, some those same European companies are looking here.

Case in point is Trident Winds itself, which now has a new German partner as of June. EnBW North America and Trident have formed a joint venture to advance the Morro Bay offshore wind project off the Central Coast with a grid connection in Morro Bay, it was announced this summer.

With 336 megawatts in operation, 610 megawatts under construction and an additional 900 megawatts under development, EnBW is becoming one of the leading developers and operators of offshore wind farms, the company says.

“With a view to long-term growth, EnBW will invest over 5 billion euros in further expansion of renewables,” the company announced recently.

Now with a partner that has operational experience, turbines already generating power and substantial capital to build a huge project, Trident’s joint venture may be ready for the next step.

For two years Trident has working with BOEM on what will be a competitive leasing of waters in the federal jurisdiction once the Department of Defense and the state of California sign off on pre-approved locations.

Asked about the coming Sept. 17 meeting, Trident Winds CEO Weinstein says she is hopeful that the “BOEM will announce designated wind areas and commence with the sales process shortly.”

Meanwhile, other parts of California remain in the running to host offshore wind farms, notably the windy Humboldt area where a community-based utility, the Redwood Coast Energy Authority, is working with a Portuguese company, Principle Power, on a plans to displace a natural gas-fired power plant in town that supplies all their power now.

Redwood, like the state of California, favors and gives priority to renewable power over fossil fuel power. The DOD’s Chun says this area is being discussed as well even though the Navy map also is colored red off the north coast, too.

Now in a twist, a new player Terra-Gen, with major wind power holdings in California already, wants to build an onshore wind farm in Humboldt County that’s capable of producing up to 135 megawatts of electricity, enough to power the 63,000 households.

Humboldt’s current power source is Humboldt Bay Power Plant, which is powered by natural gas and diesel and produces 163 megawatts. Terra-Gen is working with Humboldt’s Community Choice Aggregate, the Redwood Coast Energy Authority, to see if a contract between the power producer and the power purchaser, can be developed.

If this land-based renewable project is built, the area will likely not need offshore wind. It has little infrastructure available to take what would be surplus power to the wider California grid and major urban centers in the state.

Proximity to the state’s big north/south grid system is an advantage for the Central Coast, which has millions of dollars in existing transmission lines and substations that can accept new offshore wind power, thanks to the defunct Morro Bay power plant and the soon-to-be-shuttered Diablo Canyon facility.