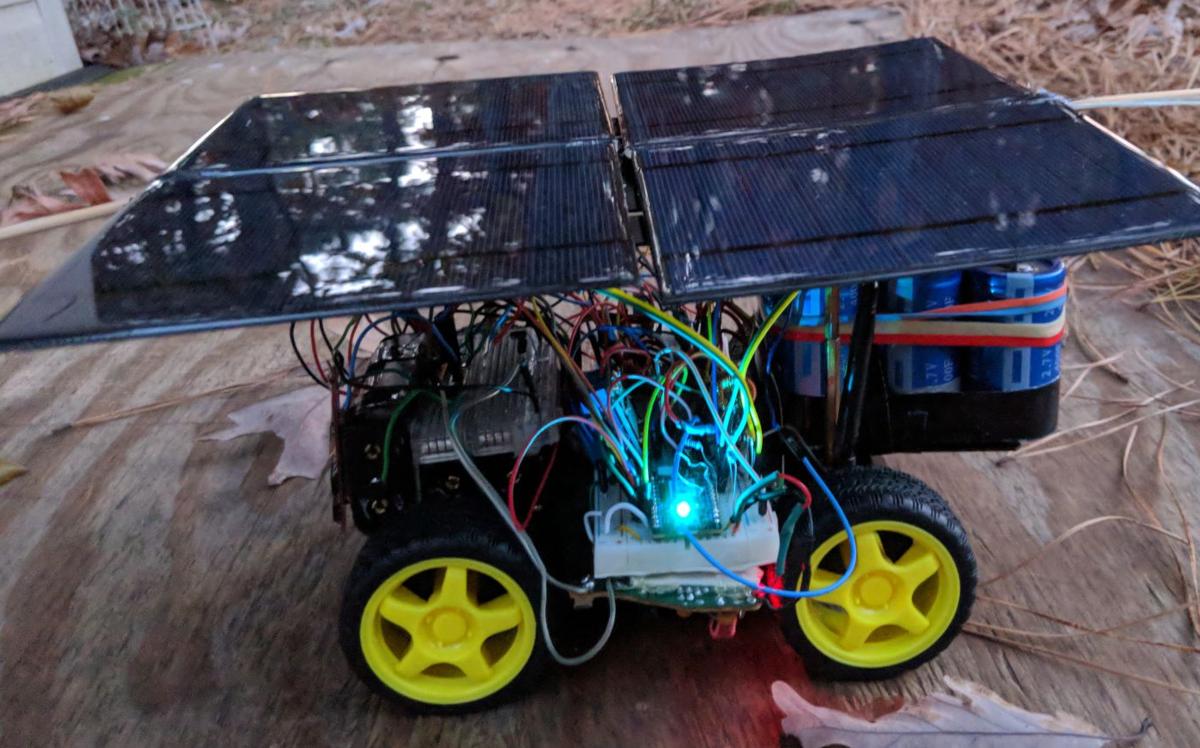 More than a year ago, Namin Shah was tinkering with supercapacitors. The 2018 Monroe Township High School graduate likes building things, taking things apart and learning how they worked, so he was naturally curious about how supercapacitors could be applied to the world around him.

“Whenever I have a weird idea, as far as electronics is involved, I try to make it,” he said. “Sometimes I just have these ideas and I go ahead and try it. Usually it fails, but sometimes it doesn’t.”

This innate curiosity eventually led Shah to a project that saw him pare supercapacitors, batteries and solar panels to prolong the range of a rover. While machines, such as the Mars rover, only last a year or two, a rover using Shah’s system could last up to 20 years, he said.

“I recently built a working robot powered by capacitors. It worked without batteries. So, I started doing more research and pitched the idea to a professor at NYU, who said the idea was sound and if I continued, I would have promising results,” said the Monroe resident.

Shah’s project is modeled after the power distribution methods found in living organisms, which utilize glycogen stores and adipose tissue to optimize power and energy density strengths and weaknesses. His rover was built with an appropriate distribution of power storage methods, creating separate power buffers. The primary buffer consisted of a 10-watt solar panel array and a 600 Fahrenheit, 5.4-volt supercapacitor bank, and the secondary buffer consisted of a 3.7-volt 6 ampere hour lithium-ion battery pack. Because the supercapacitor can store more energy and deliver it more efficiently than a battery, the primary buffer provided virtually limitless charge cycles with a superior power density, while the secondary buffer provided superior energy density and versatility.

“Most batteries have a life cycle. They can only be charged and recharged and then discharged a finite amount of times. That’s why the rovers on Mars only work for one or two years. The supercapacitors do not have that problem, they can recharge and discharge an infinite number of times,” Shah said.

The result of Shah’s project meant he had created a rover that could switch between the two buffers and travel about 22 kilometers on a full charge. The project, completed in 2017, has been published and peer reviewed by professors, engineers and scientists. Dariusz Czarkowski, an associate professor of electrical and computer engineering at New York University, helped guide Shah through the process.

“It’s a grand ambition to send it into space, but it can still be used on earth in deserts and stuff,” he said. “Just throw a camera on and explore. It could have military or civilian applications. The same sort of system could even be used on a boat or a buoy to help with tracking.”

While it may seem that Shah spends most of his time with his head in a book, that is not the case. Shah typically gets his ideas from the world around him. He found inspiration for the new battery after watching a documentary about Polar bears, and created devices to make things easier for his life as an athlete.

As a hurdler with the high school track and field team and a member of the golf team, Shah was also seeking ways to make training and playing more efficient. Unhappy with the accuracy of stopwatches, Shah created a laser timer that more accurately measured how fast athletes run. His innovations didn’t end there. “Even with golf, our season started in March, and in New Jersey, March is pretty cold, and we’re usually playing in cold conditions, with rain and sleet sometimes. So, I made a glove that heats up.”

With graduation behind him, Shah is looking to the possibilities that are ahead. He is preparing to attend the University of Illinois at Urbana-Champaign as an electrical engineering major and knows that his lifelong curiosity about how things work will never end. In fact, with the tools of the 21st century, it’s easier than ever for someone to make their wildest dreams come true.

“The weird thing is that you can do all of this. I pretty much learn all these things online watching YouTube. Electronics these days is easy to do on your own,” he said. “It’s very easy to find platforms where you can learn to code and make robots, and anyone can order what they need. I plan to keep inventing and creating things for as long as I can.”