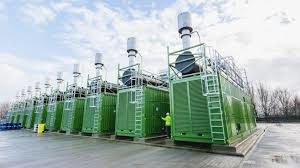 Last month, an engineer at a small power company in Solihull took a call from National Grid. A large gas plant had failed. Could the engineer’s company, UK Power Reserve, start up one of its small gas power units to help?

Without standing up, the engineer sent a text message asking for one of UKPR’s 20MW plants to be fired up. Two minutes later, the plant, a series of gas engines in green containers, each with its own chimney, was up and running.

A few hours later, the large gas power station was back on line and UKPR turned off its unit.

The episode showed how small, flexible power plants are now bridging the supply gaps, especially at a local level, between intermittent renewables and Britain’s fleet of large, but slow-to-fire-up, gas and coal plants.

Although they only generate small amounts of power, these mini units are cheap to build at around £5m for a 6MW plant and nimble to operate. They are increasingly valuable at times of peak demand, such as during last week’s extreme weather, or when the wind does not blow or the sun does not shine.

Proponents of renewable power, which accounted for just over 29 per cent of the UK’s electricity generation last year, argue that battery storage will help smooth out the peaks and troughs.

Sceptics say there will always be a need for baseload generation, large gas or nuclear plants, to ensure the country’s energy security.

And in between, there is likely to be a growing need for low-cost, rapid-response power that can fill in close to where it is needed. “There is a strong need for flexible generation in the GB power market given the continuing growth in intermittent renewables,” said Simon Virley, head of Power & Utilities at KPMG and a former government energy adviser.

Lucrative government subsidies have been a big driver behind the growth of the industry, which also includes diesel-powered generators and storage.

UKPR secured 200MW of gas-fired power capacity in the auction. The contract wins will boost the company’s generating capacity past the 1GW mark, equivalent to the output of two large-scale combined cycle gas turbine plants but spread across 40 different sites.

The private equity-backed company, which was founded in 2010 and employs 150 people, now has a turnover of £75m, an increase of 400 per cent over the past two years. 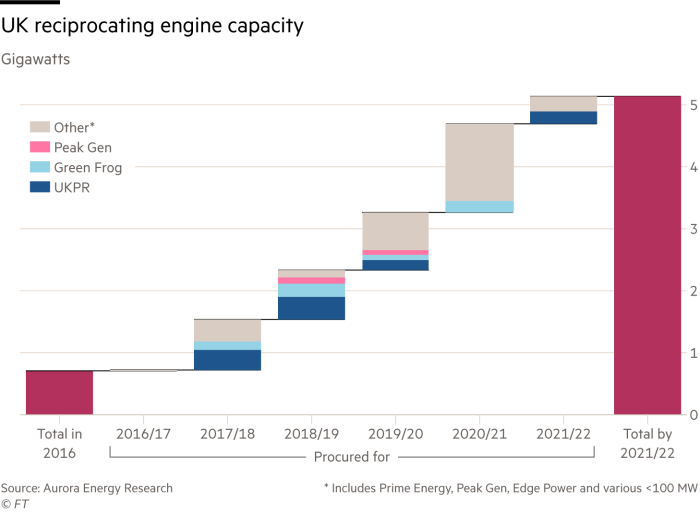 “In the world of the future, with large amounts of intermittent renewables we will see lots of peaks and troughs in electricity generation and you can’t ameliorate these dynamic and complex fluctuations with a product that takes a long time to ramp up,” said Michael Jenner, UKPR’s director of policy and regulation.

Other companies that have been successful in previous capacity auctions include Peak Gen Power, Welsh Power and Alkane Energy, which provides both baseload generation from a portfolio of coal mine methane sites and a network for peak generation assets using bought-in natural gas.

Ofgem, the energy regulator, last year cut the “embedded benefits” payments for small operators generating less than 100MW, arguing it gave them an unfair advantage against developers of larger plants as they do not have to pay hefty transmission charges. But eight of these smaller companies, including Peak Gen, have applied for and been granted a judicial review of the decision.

As some of these companies grow there is likely to be consolidation, especially as many of them are owned by private equity investors. UKPR, which is owned by Equistone Partners and Inflexion Private Equity, is in the midst of a sales process, said Mr Jenner.

“The sector has moved from small niche providers to one that is more like a large utility business which will require a different owner, investor, someone who can bring in scale and invest for the long term,” said Felix Chow-Kambitsch of consultants Aurora Energy Research.