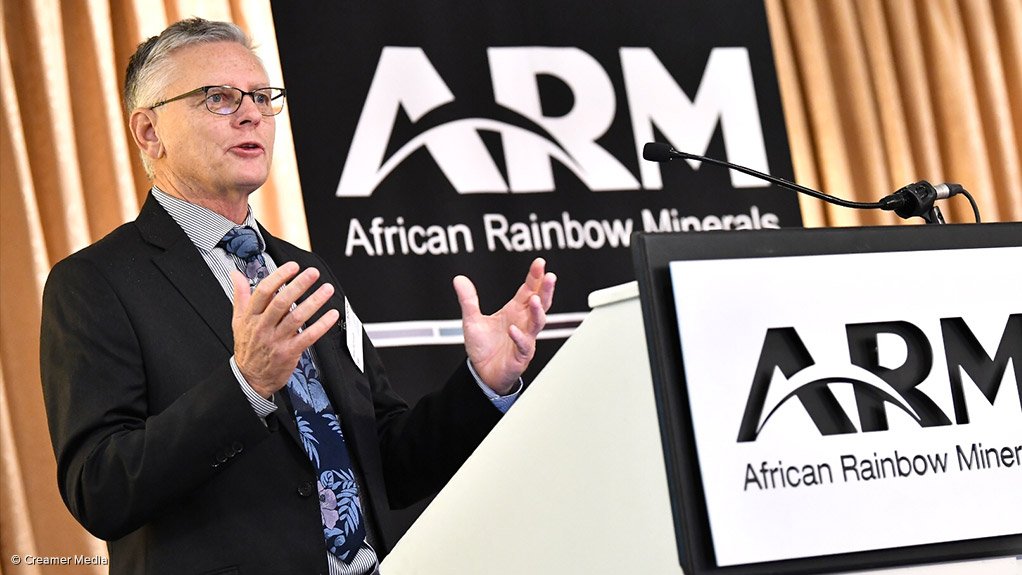 Manganese formed the backbone of the earnings performance of diversified mining company African Rainbow Minerals (ARM) in the 12 months to June 30, delivering 64% of the headline earnings, at R1.9-billion, and helping the company move into a strong net cash position by recording the best margin.

ARM generated strong cash flow in the period, when manganese’s margin of 44% on earnings before interest, taxes, depreciation and amortisation (Ebitda) was best. It beat iron-ore, which came in with the next highest Ebitda margin of 39%.

Manganese production increased by 21% to 3.7-million tonnes, helping hold unit costs down below inflation for the third consecutive year. Progress made on improving the manganese ore grade is also having a material impact on unit cost lowering.

“We continue to invest in manganese, which we firmly believe in,” ARM CEO Mike Schmidt said at the company’s presentation of results, attended by Creamer Media’s Mining Weekly Online.

Additional capital investment has been approved for the modernisation and optimisation of the Gloria manganese mine in the Northern Cape to increase the pivotal Black Rock mine’s flexibility of product specifications.

A five-year manganese export capacity allocation agreement signed with the State rail enterprise is in alignment with the ramp-up of the Black Rock manganese mine, where the Nchwaning upgrade has reached an advanced stage and the Gloria upgrade is getting under way.

The shaft and the surface infrastructures are complete at the Nchwaning manganese mine, where underground storage and rock handling facilities will be completed in the next 18 months.

“We’re getting into Gloria to do its upgrade and this year we’re going to commence with the shaft upgrade and over the next three to four years, we want to redo the plant and underground logistics,” said Schmidt of the project for which R2.7-billion has been approved.

While the new Sakura ferromanganese plant in Malaysia recorded a sharp sales volumes increase in the 12 months to June 30, ferromanganese sales volumes from South Africa’s high-cost Cato Ridge Works declined, following the reduction in operating furnaces from four to three as part of a business improvement strategy.

“Sakura ramped up beyond nameplate capacity, performing exceptionally well, even in the light of it getting very expensive ore, and thankfully, on Black Rock we delivered to them at export parity prices,” said Schmidt.

Steps taken to introduce new technology have been significant.

“In terms of what we’re doing in automation in many of our operation’s smelters, we could probably spend an hour just on what Black Rock has achieved, which has been recognised worldwide and resulted in requests to come overseas to present the one-of-a-kind, state-of-art interventions in terms of digitisation and embracing technology to improve productivity and to lower costs. And obviously, we’re looking at appropriate mechanisation going into the future. It’s a business imperative for us,” Schmidt told investors, analysts and journalists.

“A number of manganese alloy studies are ongoing to improve our cost position and productivity. Hopfully, in a couple of months, we can make an announcement about what we’re going to do with the alloy business. While Sakura is performing well, we think there is a lot of upside opportunity there, which we’re working on,” he added.

Meanwhile, the unit costs of iron-ore were held down to a 2% increase in the 12 months to June 30. “This phenomenally good result is due to many innovations and plant enhancements to create value,” said Schmidt.

“We’ve seen some of those results coming through already, which will improve our cost efficiencies and the productivity in both of our platinum operations. We’re pretty comfortable with those two operations and we’re confident that Modikwa will move down the cost curve. It’s already moving in the right direction. The team there is doing a phenomenally good job,” Schmidt added.

At Two Rivers, work is continuing on the sinking of the main decline, which will have a positive impact on grade.

Nickel, which had the highest unit cost rise of 22% in the 12 months to June 30, is expected to do well once it reaches full nameplate capacity in 2021.

ARM’s robust balance sheet is offering the company opportunity and latitude, with overall headline earnings increasing by 51% to R4 814-million and cash from continuing operations rising to R3 291-million. ARM paid out a cumulative dividend of R1.7-billion.

The basic earnings of the Johannesburg Stock Exchange-listed company, headed by executive chairperson Patrice Motsepe, were up on higher dollar prices realised for most commodities, except iron-ore, platinum and chrome concentrate.