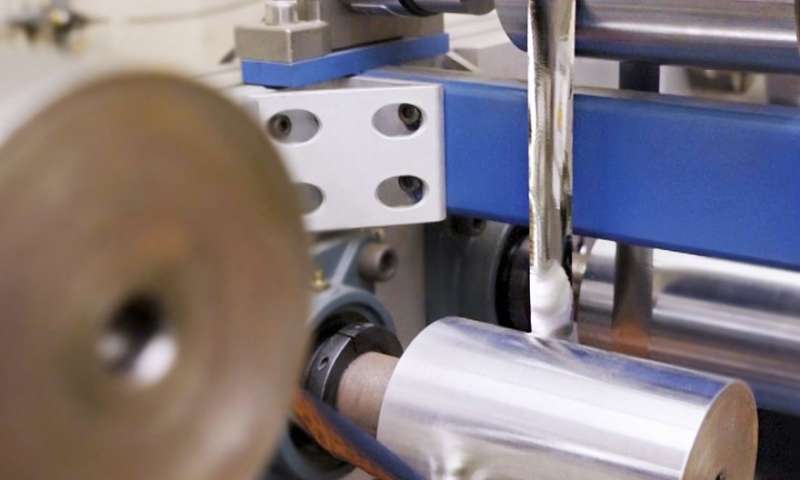 According to a statistic from the University of Chicago, 50 percent of U.S. power goes through a motor. Vehicles like cars and planes rely on motors to transform power, as do household appliances like vacuums and refrigerators. Because this space is so large, more efficient motors could make a significant difference in energy usage.

But what if the magnetic material didn’t heat up when spun at a high speed? Michael McHenry, a materials science and engineering (MSE) professor at Carnegie Mellon University, and his group are addressing this problem by synthesizing metal amorphous nanocomposite materials (MANCs), a class of soft magnetic materials that are efficient at transforming energy at high frequencies allowing smaller motors to deliver comparable power.

“The power of a motor depends on its speed,” said McHenry. “When you rotate a motor at high speeds, the magnetic material switches at a higher frequency. Most magnetic steels, which is what most motors are made of, lose power at higher frequencies because they heat up.”

Currently motors are typically made from silicon steels. MANCs provide an alternative to silicon steels and, because of their high resistivity (how strongly they oppose an electrical current), they don’t heat up as much and can therefore spin at much higher speeds.

“As a result, you can either shrink the size of the motor at a given power density or make a higher power motor at the same size,” said McHenry.

McHenry’s group, in collaboration with the National Energy Technology Laboratory (NETL), NASA Glenn Research Center, and North Carolina State University, are designing a two and half kilowatt motor that weighs less than two and half kilograms. Most recently, they’ve benchmarked it at 6,000 rotations per minute and are looking to build bigger ones that will spin even faster. The design, which is funded by the Department of Energy (DOE) Advance Manufacturing Office, combines permanent magnets with the MANCs.

To synthesize MANC materials, McHenry and his team rapidly solidify liquid metals at about a million degrees per second. Since they work at the lab scale, they look at 10 gram samples and screen them for their magnetic properties. Through various partnerships with partner research institutions and industry, they can take these MANCs and scale up the fabrication process for use in real-world applications.

During the power transformation process in a conventional motor, the magnetization of the motor materials switches, often resulting in power loss. But with MANCs, the losses associated with switching of the magnetization are greatly reduced because they are a glassy metal rather than a crystalline metal. The structural difference is at the atomic level: when the material is melted, then rapidly cooled, the atoms don’t have time to find positions in a crystalline lattice.

McHenry’s group and collaborators are some of the few demonstrating the use of MANCs in motors. Their design also uniquely uses their own patented materials—a combination of iron and cobalt, and iron and nickel, mixed with glass formers. The efficient MANCs also enable the use of lower cost permanent magnets, which do not require critical rare earth materials, in the motor design.

While the researchers test in smaller proportions at the lab scale, collaborations with companies in industry and other research labs can bring these metals to scale for use in industry.

“Eventually we can go to higher speeds and higher powers with these designs,” said McHenry. “Right now we’re benchmarking a smaller motor, and then we’ll try and build bigger ones. Motors have aerospace, vehicle, and even vacuum cleaner applications—motors are important in any number of applications. In aggregate, motors represent a huge use of electrical power, so they are one area where efficiencies can make a big difference.”