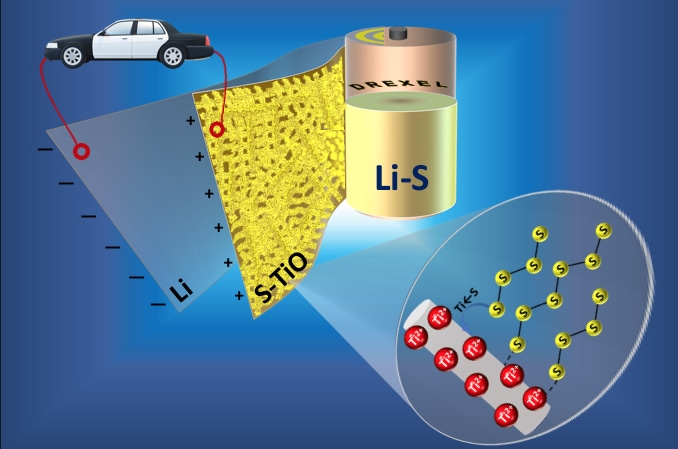 A British solar plane set an unofficial flight-endurance record in July 2008 by continuously remaining in flight for more than three days.

Lithium-sulfur batteries emerged as one of the significant technological advances that aided the flight — fueling the plane overnight with efficiency unrivaled by the leading batteries of the day.

A decade later, the world is still awaiting the commercial entry of “Li-S” batteries.

A recent breakthrough by scientists at Drexel University has just eliminated an important barrier that has been hindering their viability.

Technology companies have known for a while that the progress of their products, whether they are cell phones, laptops, or electric cars, rely on the consistent improvement of batteries.

Technology is only “mobile” for as long as the battery lasts, and lithium-ion batteries — said to be the best on the market — are reaching their limit for perfection.

With battery performance close to reaching a plateau, companies are attempting to squeeze every last volt into, and out of, the storage devices by decreasing the size of some of the internal components that do not add to energy storage.

Some disastrous side-effects of these structural changes are the meltdowns and malfunctions that occurred in many Samsung tablets in 2016.

Scientists and the technology sector are exploring Li-S batteries to ultimately replace Li-ion because this new chemistry theoretically permits more energy to be stored into a single battery — a measure known as “energy density” in battery research and development.

This enhanced capacity, on the order of 5-10 times that of Li-ion batteries, equates to an extended runtime for batteries between charges.

The issue is, Li-S batteries haven’t been able to sustain their excellent capacity after the first few recharges.

It turns out that the sulfur, which is the main ingredient for better energy density, migrates away from the electrode in the form of intermediate products called polysulfides, resulting in loss of this main ingredient and performance fade during recharges.

For years researchers have been aiming to stabilize the reaction within the Li-S battery to physically contain these polysulfides, but most attempts have resulted in other complications, such as adding weight or expensive materials to the battery or adding a number of complicated processing steps.

But a new method, publicized by scientists in Drexel’s College of Engineering in a recent edition of the American Chemical Society journal Applied Materials and Interfaces, shows that it can keep polysulfides in place, preserving the battery’s remarkable endurance, while decreasing the overall weight and the time taken to make them.

This is a significant development because we have found that our titanium monoxide-sulfur cathode is both highly conductive and able to bind polysulfides via strong chemical interactions, which means it can augment the battery’s specific capacity while preserving its impressive performance through hundreds of cycles.

We can also demonstrate the complete elimination of binders and current collector on the cathode side that account for 30-50 percent of the electrode weight — and our method takes just seconds to create the sulfur cathode, when the current standard can take nearly half a day.”

Their findings indicate that the nanofiber mat, which at the microscopic level looks like a bird’s nest, is an exceptional platform for the sulfur cathode as it attracts and captures the polysulfides that form when the battery is being used.

Holding the polysulfides in the cathode structure prevents “shuttling,” a performance-draining phenomenon that happens when they dissolve in the electrolyte solution that separates the cathode from the anode in a battery.

This cathode design can not only enable the Li-S battery to preserve its energy density, but also to achieve it without the need for extra materials that increase weight and cost of production, according to Kalra.

To realize these dual goals, the team has closely examined the reaction mechanisms and formation of polysulfides to better comprehend how an electrode host material could help preserve them.

This means their cathode design can help a Li-S battery maintain its energy density — and achieve it without using more materials that increase weight and production cost, according to Kalra.

Kalra’s earlier work with nanofiber electrodes has revealed that they provide a range of advantages over existing battery components.

They have a greater surface area than existing electrodes, which means they can handle expansion during charging, which can increase the storage capacity of the battery.

By filling them with an electrolyte gel, they can remove flammable components from devices minimizing their vulnerability to leaks, fires, and explosions.

They are produced through an electrospinning process that looks quite like making cotton candy, which means they have an advantage over the typical powder-based electrodes which necessitate the use of insulating and performance weakening “binder” chemicals in their production.

Along with its work to create binder-free, freestanding cathode platforms to optimize the performance of batteries, Kalra’s lab put together a rapid sulfur deposition method that requires merely five seconds to get the sulfur into its substrate.

The process melts sulfur into the nanofiber mats in a somewhat pressurized, 140 °C environment — removing the need for time-consuming processing that uses a blend of risky chemicals, while refining the cathode’s capability to hold a charge after long periods of use.

Following Zephyr-6’s record-setting flight in 2008, a number of companies have invested in the development of Li-S batteries in anticipation of increasing the variety of electric cars, making mobile devices last longer between charges, and even helping the energy grid house solar and wind power sources.

Kalra’s work currently offers a path for this battery technology to move past several impediments that have decelerated its progress.

The team will pursue developing its Li-S cathodes with the goals of further enhancing cycle life, decreasing the formation of polysulfides and lowering the cost.