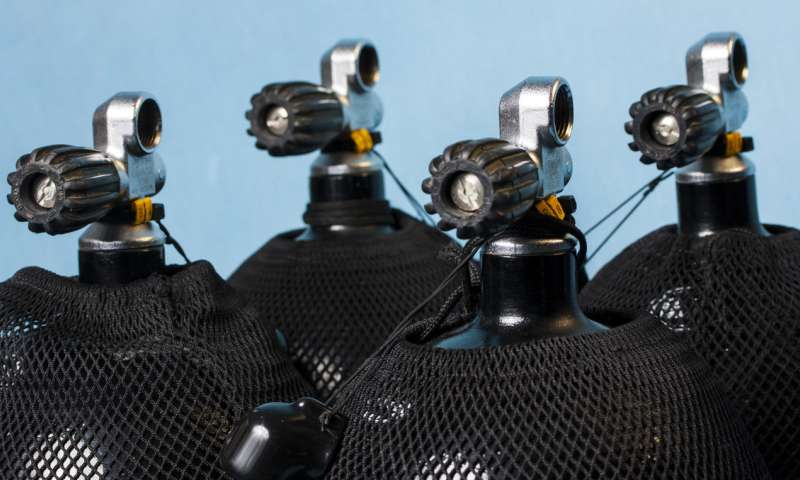 Electricity generated by fossil fuels is increasingly unsustainable and a shift towards renewable energy – principally from the sun and wind – is vital. Renewable generation is already less expensive per unit than its polluting counterparts, but the fact the sun doesn’t always shine and the wind doesn’t always blow presents an obstacle to a serious takeover of the energy sector.

Energy storage could overcome this pressing “intermittency” issue. If storage was available at sufficiently low cost and high performance, renewable energy would rapidly displace all other generation forms.

Energy is already stored, of course, in batteries or various other technologies. Even reservoirs can act as huge stores of energy. However nothing that exists or is in development can store energy as well, and as cheaply, as compressed air.

The concept seems simple: you just suck in some air from the atmosphere, compress it using electrically-driven compressors and store the energy in the form of pressurised air. When you need that energy you just let the air out and pass it through a machine that takes the energy from the air and turns an electrical generator.

Compressed air energy storage (or CAES), to give it its full name, can involve storing air in steel tanks or in much less expensive containments deep underwater. In some cases, high pressure air can be stored in caverns deep underground, either excavated directly out of hard rock or formed in large salt deposits by so-called “solution mining”, where water is pumped in and salty water comes out. Such salt caverns are often used to store natural gas.

Compressed air could easily deliver the required scale of storage, but it remains grossly undervalued by policymakers, funding bodies and the energy industry itself. This has stunted the development of the technology and means it is likely that much more expensive and less effective solutions will instead be adopted. At present, three key problems stand in the way of compressed air:

1. It’s not a single technology

The above description of how it works is an over-simplification. CAES is, in fact, not a single technology but a wide family that includes compression machinery, expansion machinery, heat exchangers, the design of air stores and the design of thermal stores. These all require meticulous engineering to get right.

At the moment, wind and solar still make up only a small proportion of the overall sector. As electricity generated from fossil fuels can cover the overcast or wind-free days, renewable energy is often used straight away and only needs to be stored for short amounts of time. For these situations, batteries work quite well and can be economically viable.

Large-scale decarbonisation will require us to store energy for much longer periods, however, for instance from a sunny day to use on a cloudy day. CAES is especially suited for storage durations of some hours through to several days.

All affordable energy storage involves converting energy from the form of electricity to some other form and storing it in that other form. For pumped-hydro storage, for instance, the other form is water that has been lifted up to a great height. For CAES, that other form includes both heat and high-pressure air.

For such systems, there are separate costs for the equipment that does the conversion and for the storage itself. Systems like CAES and pumped-hydro involve relatively expensive equipment for the power conversion but very inexpensive provisions for the storage of energy. These systems, where small amounts of power can fill up very large amounts of storage, are therefore very economical for storing energy over a long period.

Private investment requires high rates of return. An indirect effect of this is that investors place less value on what utility may be left in an asset in the longer term.

In most CAES systems, costs are concentrated in things that naturally have very long lifetimes. For example, a solution-mined cavern in a salt deposit might reasonably be expected to operate for at least 100 years, while high power machines for compressing and expanding air can typically operate for 50 years or more. With returns over such a long timescale, there is a strong argument that at least some large-scale compressed air installations should be treated as national infrastructure projects financed by governments.

Two large compressed air plants were built decades ago, one in Huntorf, Germany and the other in McIntosh, Alabama. Both are still working extremely well. Many refer to these two plants to draw conclusions about how efficient CAES can be and how much or little it can cost.

But this is misleading and pointless. Both plants were designed with very different priorities from those relevant today. It is imperative that we now think again about compressed air energy storage and evaluate it properly in light of what can be achieved by exploiting modern methods and knowledge.