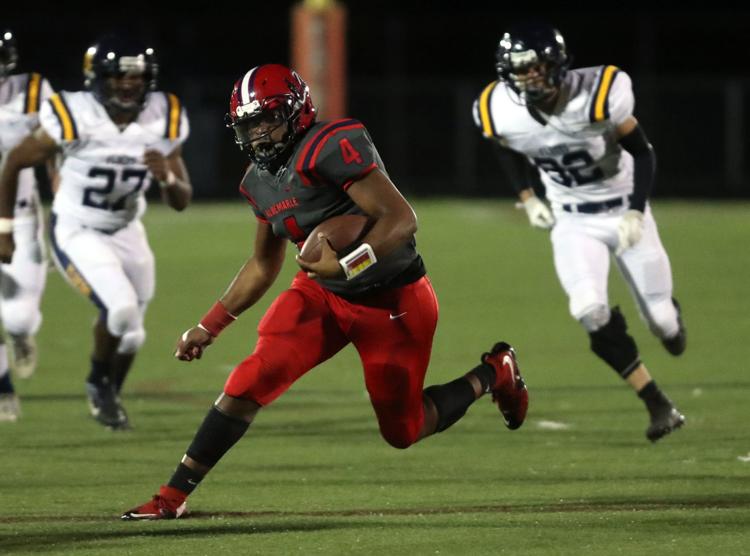 “It was a total team effort on both sides of the ball,” said AHS linebacker John Barber, who led the team in tackles. “We had a lot of guys playing both ways and, in the end, we just wanted it more.”

The game looked like a heavyweight title fight for most of the night, as the running game took center stage. Mahki Robinson-Washington rushed for 56 yards in the first quarter before a knee injury sidelined him for the rest of the game.

Fluvanna County (6-2, 4-1 Jefferson District) pounded the rock in Coach Mike Morris’ Wing-T attack with a bevy of running backs. The Flucos also took advantage of a pair of big plays on special teams.

Leukas Koczan blocked Yousof Algburi’s 32-yard field goal attempt with 7:28 left in the half. Three minutes later, Joey Vandyke blocked an Albemarle punt and the Flucos recovered at the 17 with less than two minutes to play in the half.

Fluvanna took advantage of the good field position, as quarterback Kobe Edmonds scored on a 17-yard touchdown run on the next play from scrimmage to give his team a 7-0 halftime lead.

The Flucos extended the lead in the third quarter thanks to a big play from their defense. Prophett Harris picked off Dequadre Taylor and returned it 25 yards to near midfield. Five plays later, Austin Craig scored from five yards out on a buck sweep. The Patriots blocked the extra point opportunity to make it a 13-0 lead with 3:02 left in the quarter.

In need of a spark, Isaiah sent Myles Ward back to receive a Fluvanna punt with less than seven minutes to play. The senior fielded the punt on one bounce, worked his way to the right, found a hole near midfield, cut back and raced 75 yards for a touchdown to trim the lead to 13-7 with 6:38 to play.

“Myles Ward is a great player,” Taylor said. “I told him coming out of the [locker room] at halftime that we have to go make a play. Somebody’s got to make a play and it was him and the team fed off him. The punt return team blocked for him and made it happen.”

The score sparked the defense, as Albemarle’s Jacob Romback forced a fumble and defensive back Alexander Kiel recovered to give the Patriots a first and 10 from the Fluvanna 24.

Taylor responded with four straight carries, capped by a three-yard touchdown run. Algburi added the extra point to give Albemarle (4-4, 4-1) its first lead of the game, 14-13, with 4:01 to play.

Fluvanna had two possessions in the final four minutes but was unable to mount a serious rally. The Flucos stopped Albemarle on fourth and short to get the ball back near midfield with 59.2 seconds left.

In need of a big play, Cameron Holland was inserted at quarterback as Fluvanna looked to hit a big play in the passing game. Albemarle’s defense was up to the task as Barber got free on a blitz and hit the quarterback prior to the pass and the Patriots recovered to seal the win.

“Coach just said go out there and make a play,” Barber said. “On film, we saw when No. 12 entered the game that they were going to pass. The hole just opened up and I saw him there and I was able to make a play.”

The win marks the sixth straight victory for Albemarle against Fluvanna County. It also extends the Patriots’ current winning streak to four in a row as they look to secure a playoff berth.

Taylor rushed for 111 yards on 19 carries and a touchdown to lead the Patriots to the homecoming win.

“I’ve got to give all the credit to my offensive line. They played their heart out tonight,” Taylor said. “Without them, I wouldn’t have been able to do what I did tonight. I appreciate them guys and we’ve just got to keep working hard.”

Harris had eight carries for 41 yards to lead Fluvanna. Nathan Smith added 40 yards on the ground and Edmonds finished with 37 yards.